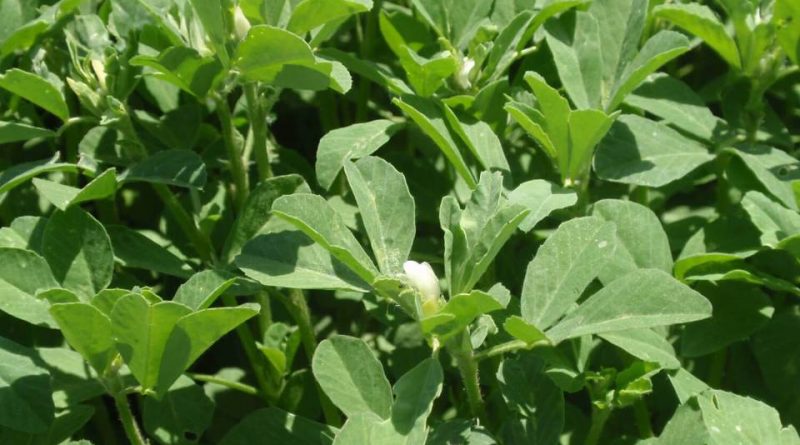 Fenugreek (Trigonella foenum-graecum L.) is a herbaceous species belonging to the Fabaceae family.

Systematics –
From the systematic point of view it belongs to the Eukaryota Domain, Kingdom Plantae, Magnoliophyta Division, Magnoliopsida Class, Fabales Order, Fabaceae Family, Faboideae Subfamily, Trifolieae Tribe and therefore to the Trigonella Genus and to the T. foenum-graecum Species.

Etymology –
The term Trigonella comes from the Greek triganos = triangular, from treis = three and gwnia = angle, allusion to the shape of the corolla whose banner and the patent wings form a triangle.
The specific epithet foenum-graecum comes from foenum hay and Greek graecum: fenugreek, due to the use that was made, in antiquity, for feeding the cattle.

Geographical Distribution and Habitat –
Fenugreek is a plant coming from the Middle East and North Africa. Its typical habitat is that of dry climates where it can grow on soils even with high salinity. It grows in the uncultivated, sometimes along the roads, below the lower montane belt, with optimum in the Mediterranean belt. It is cultivated and used in a long band with a dry climate that goes from Morocco to Egypt, to Persia, to India and to China. 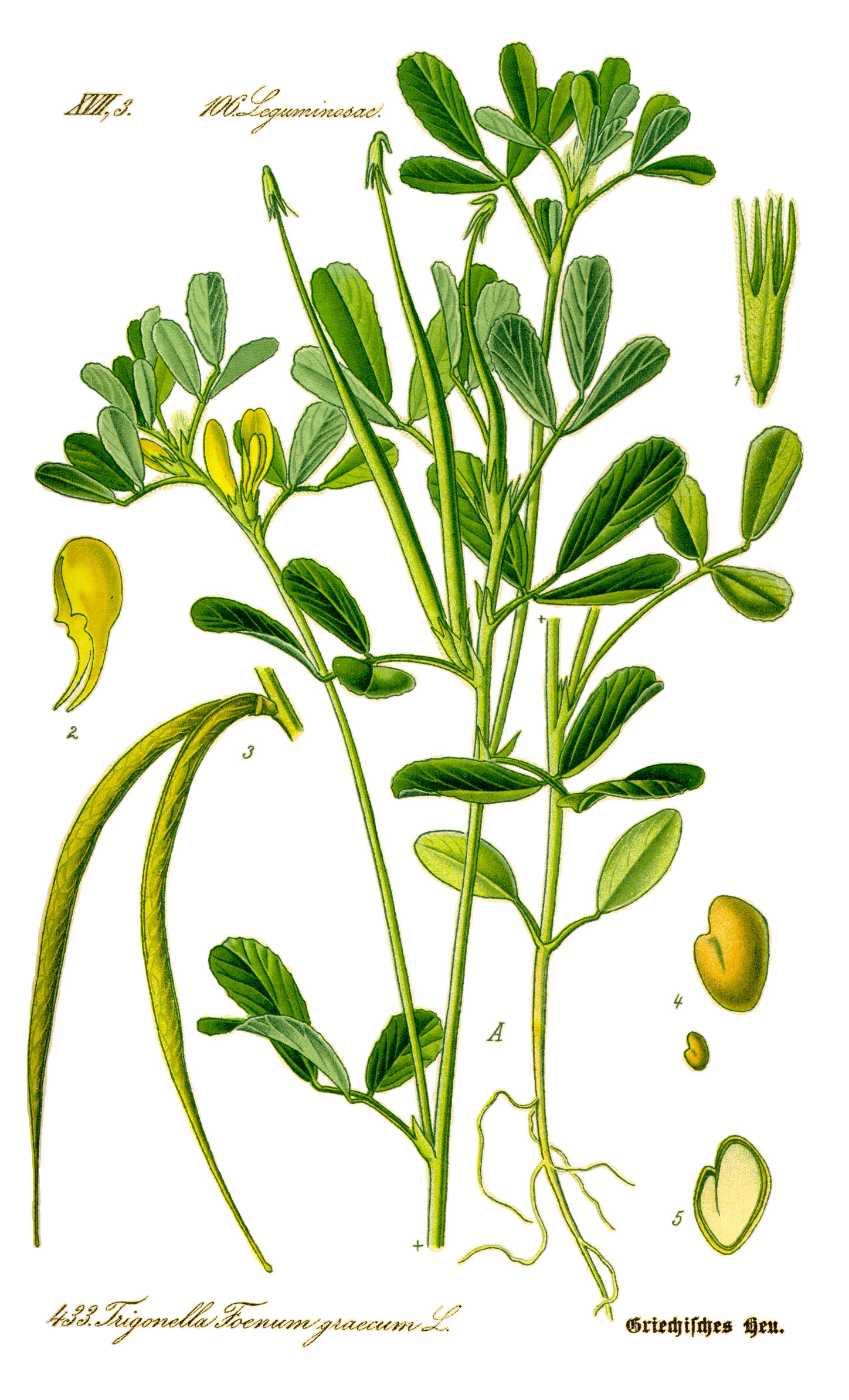 Description –
Trigonella foenum-graecum is an annual plant that can grow up to 60 cm in height. with straight and entirely empty stem.
The leaves are composed and trifoliate, similar to those of the clover.
The flowers grow at the base of the leaf axils and are white-yellow in the shape of a triangle.
The anthesis is between May and June
The fruits are legumes of about 8 cm inside which there are about twenty yellow-brown and triangular seeds.

Cultivation –
Fenugreek is an annual plant, cultivated for its leaves and seeds.
The fenugreek is sown in spring, or even in late winter in protected cultivation, burying the seed at 1 cm and with a planting distance of 10-15 cm.
It germinates in 3-5 days, immediately showing two robust cotyledons.
The cultivation is carried out in the open field and can also be carried out in the same way both in autumn and spring. In the first case it is harvested between July and August, while if it is sown during the summer, the harvest arrives during the cold.
Sown on drained soil and well exposed to the sun, fenugreek germinates without difficulty and begins to grow without requiring any particular attention.
The only care is to keep the soil free from weeds in the period after sowing, repeating this work until the plant has taken root properly.
For the entire duration of cultivation, it is a good rule to water it constantly and sparingly to keep the soil moist, avoiding stagnation.
Trigonella seeds are harvested when the pods dry and are dark brown in color; however we must be careful not to postpone this work otherwise the wind could disperse the seeds causing the crop to lose.
Fenugreek is a legume used in Italy mainly as a green manure plant.

Uses and Traditions –
Fenugreek, in the past was considered, from all the populations that overlooked the Mediterranean, a spice with innumerable applications, in the kitchen as in medicine, moreover it is known since antiquity, as a fodder for livestock (hence its name ), for the use of seeds as a spice or for its medicinal qualities.
Although it is little known today, in ancient times there were no people in the Mediterranean basin that did not consume it and appreciated its qualities, so much so that many cultures considered it a real medicine.
Suffice it to say that in 1550 BC the Egyptians described and enumerated their characteristics in a document (the Ebers papyrus) in which they reported all the medicinal species they used in the kitchen and in medicine. But it is the Romans who coined the name of Greek hay, precisely because they bought this vegetable from Greece, which in turn imported it from the Arab countries.
Traces of it can be found in Persia and ancient Egypt. North of the Alps it was set in the gardens of the monasteries by Benedictine monks. Cited in the Capitulare de villis of Charlemagne (circa 795).
Fenugreek is a little-known vegetable, at least in Western kitchens.
In Asia, especially in India, it is customary to consume trigonella leaves as if they were cooked vegetables, while in Europe the use of germinated seeds is beginning to take hold.
Fenugreek is a spice to which medicinal and beneficial qualities have always been attributed, mostly recognized by science even in modern times.
It is a food suitable for all people suffering from diabetes, given its ability to decrease blood sugar by promoting the production of insulin, a compound capable of lowering sugar levels and stimulating hunger.
Fenugreek also acts on the pancreas causing it to produce bile; this effect helps to regulate cholesterol levels in the blood, both in people suffering from diseases and in healthy people.
Even athletes can benefit from the consumption of this plant: the high presence of proteins gives the spice tonic and restorative qualities; the ideal before and after a physical effort, especially for those who want to increase and tone their muscle mass.
However, Trigonella foenum-graecum does not only contain proteins, the seeds of this plant are a veritable reservoir of fiber and nutrients: it contains significant amounts of vitamins (A, B and C) and minerals, in particular potassium, magnesium, calcium and iron.
All these qualities make this plant a spice so portentous that it has been included by right in the circle of “superfoods”, foods that besides being very good can improve the functioning of human metabolism.
Seeds are commonly and widely used in the kitchen. It has a characteristic odor for some difficult to appreciate.
In India – the largest producer and consumer of fenugreek – seeds are widely used in the kitchen (eg for some types of curry) and also the shoots and leaves are consumed, both fresh and dried.
Italian popular tradition recommends it to increase milk production in mothers and this galactogenic action is also recognized in U.S.A. and in Third World countries.
The role of seeds as hepatoprotectors is recognized, particularly in ethanol intoxication and in hepatic steatosis associated with obesity.
It is also considered an excellent tonic, as it is rich in saponins, which have the effect of stimulating the appetite. It is rich in iron, therefore it is indicated to fight anemia, considering that it increases the production of red blood cells carried out by the bone marrow.
For all its properties this plant is now also used in herbal medicine, in fact its seeds contain trigonellin and a rich quantity of mucilage: the alkaloid and mucilage are the active molecules of fenugreek seeds and perform an effective activity as emollients and expectorants. This is not the most common use of the seeds of Trigonella foenum-graecum: the extract is above all a known tonic, indicated for those who, due to nutritional or convalescent deficiencies, need to stimulate the metabolic activity.
We point out that fenugreek is a phytotherapic considered safe and is sold in pharmacies, herbal medicine and parapharmacy as a free-sale supplement, that is, it can be purchased without a prescription.
However, as reported on the packaging on the market, the dry seed extract is not indicated for those who are on hypoglycemic medication.
Among the adverse effects reported there are low intensity events in the gastro-intestinal tract.
The patient should follow the doses indicated on the package and in case of doubt ask for the advice of the pharmacist and doctor.

Preparation Mode –
Fenugreek seeds can be used as a spice only after being softened: leaving them in water overnight or, as usual, toasting them.
Toasted fenugreek can be used as a condiment for summer salads or in addition to cooked vegetables, dishes based on mushrooms or legumes, with lentils in particular. But we must be careful not to overdo the quantities, the flavor of this spice can cover the tastes of foods. It is advisable to follow this advice even when it is used to prepare the fried in which to cook beef and lamb.
It is often used as an ingredient in curry; Fenugreek is a spice that in Asian countries has great value in the kitchen, so much so that it is a fundamental ingredient of many vegetable and meat dishes, but also in desserts: it is used, for example, in some variations of the very good Halvan.
As a medicinal plant a decoction can be prepared; in this case you can use 2-3 tablespoons of dried seeds in a liter of water, boil for at least 15 minutes, allow to cool and filter, sweetening to taste. For a purifying effect, drink the decoction in the morning.