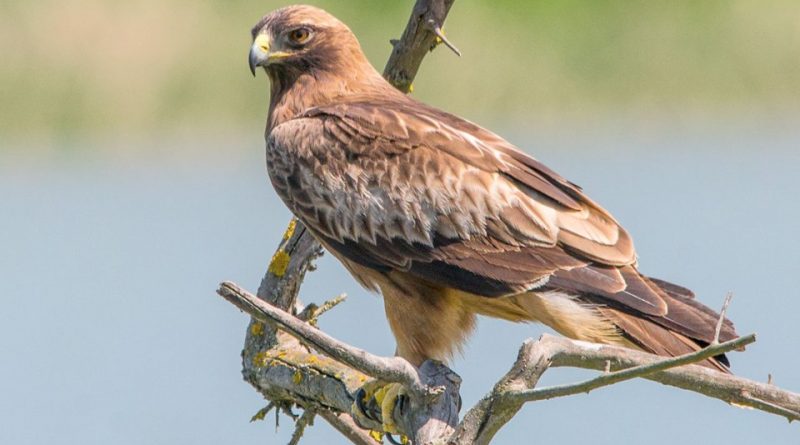 The Booted Eagle (Hieraaetus pennatus J. F. Gmelin, 1788) is a bird of prey of the Accipitridae family.

Systematics –
From the systematic point of view it belongs to the Eukaryota Domain, Animalia Kingdom, Phylum Chordata, Aves Class, Accipitriformes Order, Accipitridae Family, Aquilinae Subfamily and therefore to the Genus Hieraaetus and to the H. pennatus Species.

Geographical Distribution and Habitat –
The Booted Eagle is a migratory bird that nests in the central and southern belt of Europe and Asia, as well as in some areas of northwestern Africa. The population of the Western Palearctic winters in transaharian Africa up to South Africa. The post-reproduction migration to the wintering areas takes place from August to November, the pre-reproductive migration to the nesting areas between March and April. In Italy it is a regular migrant, but with a low number of individuals, and an irregular winter visitor and since the second decade of this century, cases of nesting have been reported in Pantelleria and in the province of Grosseto.
The European nesting area is located in some parts of France, throughout Spain, in southern Portugal, in north-western Africa from northern Morocco to Algeria and Tunisia, in eastern Europe from Belarus and from eastern Poland to south through Ukraine, Slovakia, Hungary, Bulgaria, northern Greece and southwest Asia, Turkey and the Caucasus.
Its habitat is mainly represented by mixed forests interrupted by moors, grasslands and cultivated fields. In the wintering areas it settles in the tree-lined savannah. 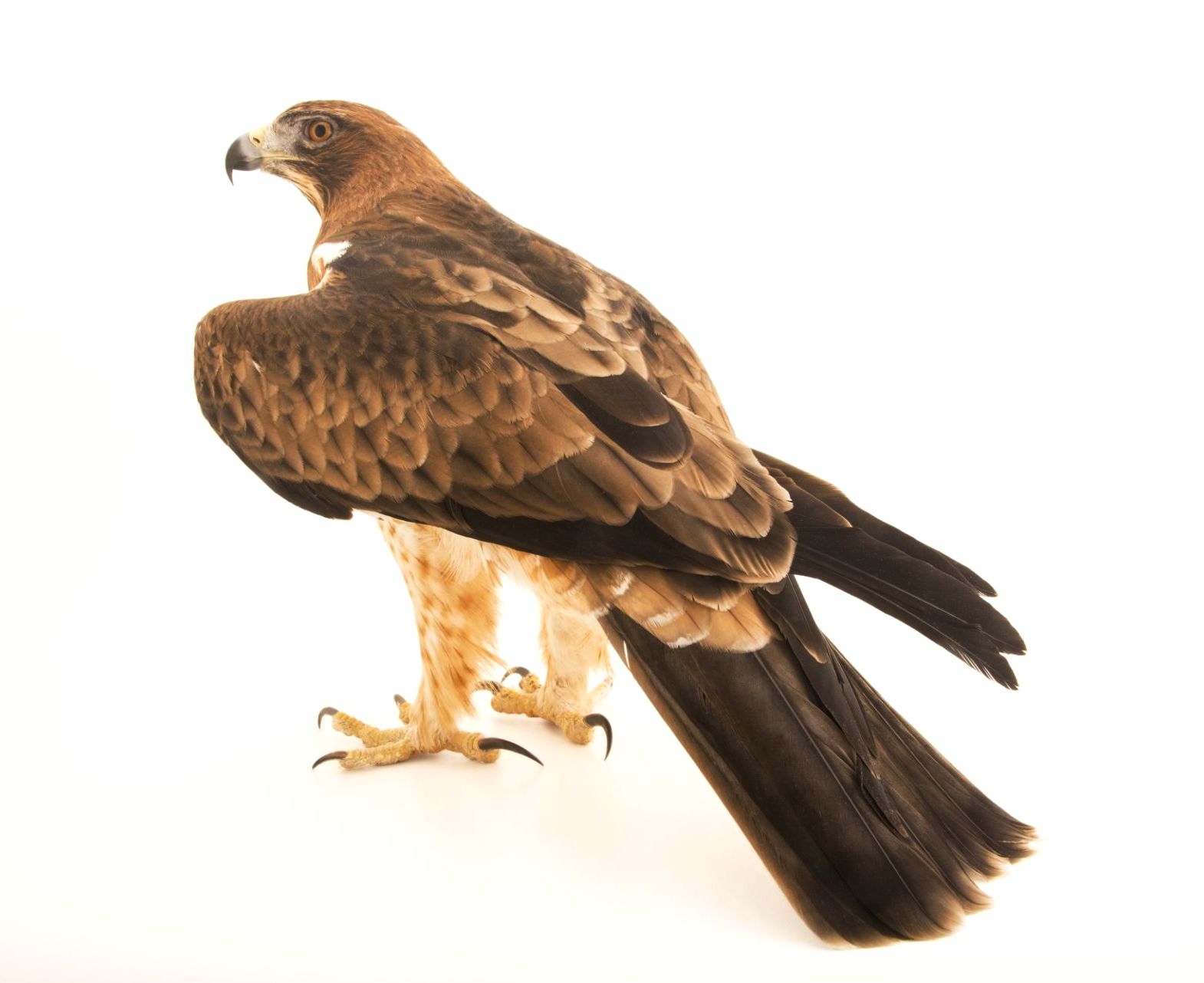 Description –
Hieraaetus pennatus is a raptor of medium-large dimensions and slender forms with a length of 45-52 cm, a weight of about 800 grams and a wingspan of 100-120 cm.
The tail is long, the wings narrow, the beak short and hooked, the long and feathered tarsi, the very developed and curved claws. Furthermore, there is no sexual dimorphism, although the female is on average 10% larger than the male.
This diurnal bird has two main morphisms, almost identical to each other in the upper part of the body but with different nuances in the lower areas. The two forms of morphism are mainly brown, except for a clear frontal crown, a cream-colored posterior crown, a distinctive milky color on the coverts of the wings and white vertical spots where the wings meet the body.
The light morphism shows the lower part of the body largely creamy white, while the dark morphism is characterized by the dark brown lower part, with streaks and spots varying from the light then dark and, in some individuals, a slight tawny hue .
The plumage of the young specimens of both morphisms differs very little from that of adults.

Biology –
The Booted Eagle leads both solitary life and as a couple and only occasionally meets in small groups during migration.
The beginning of the reproductive period is marked by the attitude of the couples performing spectacular acrobatic courtships during which, among other things, the female in flight turns with her belly to the air and extends her paws to the male, who rushes into a dive about her.
The nest is generally built on trees at a fair height from the ground and is used for several years thereafter. The nest is large, has a diameter of about 70 cm and 30 cm of thickness; it is made with sticks and twigs and covered with green leaves, renewed during the nesting period.
The nesting behavior of the lesser eagle varies slightly in its range: the northern populations tend to build the nest on a tree or on the outcrop of a cliff, while the populations of southern Africa nest only on the cliffs.
This bird, during the year, performs a single brood with deposition in the period of April.
Two eggs are laid with an interval of one week from the other and are incubated by the female only for a period of about 30 days; in the meantime the male provides for the food. Chicks are nests and both parents contribute to their feeding. The first feathers appear after 20 days and the plumage completes its development at 40 days of life.
The young leave the nest around 50-55 days of age and fly away between late July and August. It seems that often only one of the little ones can survive.

Ecological Role –
The eating diet of the Booted Eagle varies according to the habitats.
This can range from insects to medium-sized birds and mammals. Birds normally represent the main food source, but in Spain large lizards, young rabbits and red partridges also represent an important source of food for these birds of prey.
In general the northern populations feed mainly on small birds, mammals and reptiles, while in Africa it is the rodents that make up most of the diet.
The hunting technique is characterized by flying high at high altitudes moving in a circle and diving almost to the ground, then rising slightly and flying quickly with claws pointed forward with the aim of grabbing any little bird that is on the ground or is flying bass. With this technique he can also catch rabbits and lizards.
But this bird can lurk at the edge of an open area, catch insects while walking and even steal eggs and chicks from the nests of other species.
The lesser eagles are quite tied to each other and do not defend any territory.
The beaten flight is characterized by deep and decisive strokes with a rather soft wing. It flies with the wings held slightly bent down, not flat, and with the tail rather open. Slips with the wings held down like the kites, with the wrists pushed forward and the tail closed.
Hieraaetus pennatus is a bird of prey that flies and glides continuously over the trees, spending most of its time flying, maneuvering itself in spectacular flight performances: in fact they fly in narrow circles over the forest, they dive suddenly up to the level of treetops and then hover at low altitude over a large area and go up again with almost motionless wings.
When the breeding season begins, both adults fly over the forest making loud calls.
Outside the courtship period, members of a couple often fly together, couple ties last throughout life.
Regarding its conservation and spreading status, this bird is generally widespread and common in its range, but local declines have occurred, probably as a result of various factors including loss of natural habitats, disturbance and persecution. by man, the use of pesticides and the general decline in biodiversity and available prey.
The 2018 Red List of the IUCN (International Union for Conservation of Nature), however, classifies the Booted Eagle as LC (Less Concern).