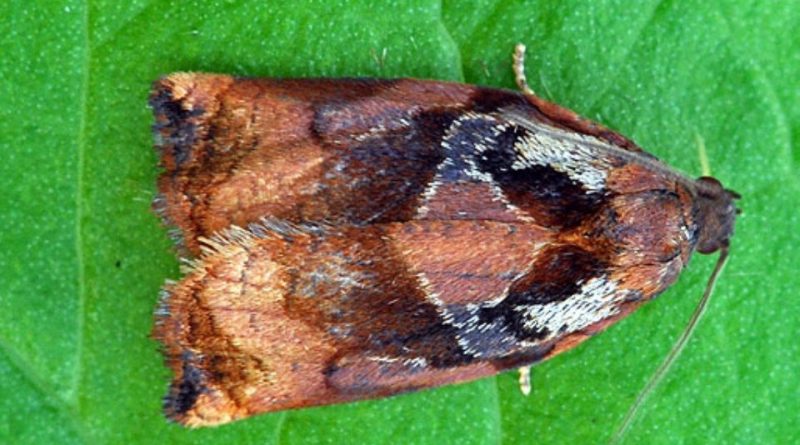 Geographical Distribution and Habitat –
The Archips podanus is a widespread moth especially in the northern regions, very polyphagous in that it lives at the expense of many plants including: apple, pear, stone fruit, vine, strawberry and broadleaf forestry and ornamental.

Morphology –
The Archips podanus is a moth that at the adult stage has a wingspan of 17 -19 mm for the male and 19 to 22 mm for the female. The front wings are truncated at the top, light brown in color with 3 slanted ill-defined spots, especially in the female. The hind wings are instead of brownish gray with the orange apex and fringes. These are therefore insects with high sexual dimorphism.
It has a brown head and chest and a brownish gray abdomen.
The eggs are laid on the bark in oloplates (with a diameter up to 7 mm) which contain from 3 to more than a hundred eggs; these are initially greenish in color and then become brownish gray, imbricate and covered with a translucent protective substance.
The larva that develops is 18 – 24 mm long, olive green in color but may also vary depending on the diet from yellowish to purple; in some cases it may present a medium dorsal line of slightly darker green color. It has long silver bristles placed on small whitish warts scattered all over the body.

Attitude and biological cycle –
The Archips podanus spends the winter at the stage of young larvae and then resumes its activity in spring, feeding on the vegetative organs present (buds and flowers).
Adults flutter in the period from May to the first half of June; 1st generation larvae are active between June and July.
The adults of the 2nd flight will appear between July and August, so in the period of August we find the 2nd generation larvae that can give rise to a 3rd generation whose adults will appear in September. These are the adults that will give rise, in the period of October to the generation of the wintering larvae. In this way the Archips podanus can perform up to three generations a year.
The adult has an average life of 15 days.
The larva develops in an oscillating period, also depending on the climatic conditions, from 28 to 55 days. The young caterpillars penetrate the shoots and then bring the leaves closer together with silky threads. As a result of their activity the leaves curl up in the form of a cigar, they gnaw the parenchyma, respecting its ribs. The terminal buds are the most welcome and affected ones.
The caterpillars penetrate the buds in formation by cutting the peduncle under the glass. The stamens and the pistil attack the flowering leaving silky threads on top. This type of attack is quite common on the apple tree.
The duration of development of the nymph is from 15 to 20 days.

Ecological Role –
The Archips podanus is a moth that carries out its biological cycle on many species, mainly apple, pear, stone fruit, vine, strawberry and broadleaf forestry and ornamental; they can be found on Betulle (Betula), Acero (Acer), Platani (Platanus), on the Poplar (Populus), on the Oaks (Quercus) but also on other shrubs and on annual or multi-annual plants: Ribes, Raspberry, Hazel, Hops, Lauro (Laurus), Ligustro (Ligustrum), Honeysuckle (Lonicera), Myrtle (Myrtus), Lilac (Syringa vulgaris), Viburnum (Viburnum) and Nettle (Urtica).
Because of its activity they carry out erosions on the young leaflets and penetrate into the flower buds destroying the internal organs, they also attack the young fruit-bearing trees where they carry out profound erosions causing the appearance of deformities during growth. On the vine plants it damages the leaves and the bunches. The damages caused in early spring are never very serious, while those that occur in the middle of summer are much more serious, where the larvae make extensive erosions on the fruit in the parts in contact with other organs. On apple varieties with short stems and on cherries erosions are concentrated in the peduncular area of ​​the fruit.
For the containment of this moth the reduction of agricultural specialization is fundamental, the presence of agro-ecological solutions (hedges, dry-stone walls, consociations, etc.) that benefit the presence and biocenosis of other antagonist insects such as: Calcidoidei and Braconidae Hymenoptera and , among the Calcidoidei, very important are the Trichogramma that are active on the ovature; finally remember the Diptera Larvevorids whose larvae parasitize the larvae of the Tortricidae.
When sampling is needed to identify the intervention threshold, all the embroiderers, in particular Pandemis cerasana and Archips podanus, are often considered cumulatively.
Environmental sampling must be performed in spring to assess the activity of the wintering forms on buds and flower bunches. In prefioritura (for the wintering generation) the threshold is 15-20% (in some cases lowered to 5%) of infested shoots.
From flowering, for subsequent generations, the threshold is 5% of infested buds / bunches; if no action is taken first, the petals may fall with the same products. After these interventions, carried out according to the indications emerging from the samplings, all the other treatments can be performed by evaluating the thresholds using sexual traps. The monitoring methodology includes the following phases:
– towards the beginning of May traps must be mounted;
– the number of traps can vary from one per hectare or two per medium-small company;
– if the combined catches of Pandemis and Archips are taken into account, the cumulative intervention threshold is 30 adults captured in the two traps in 1 or 2 weeks;
– if only Pandemis is taken into consideration, the intervention threshold is 15 adults captured by trap in 1 or 2 weeks.
In general, the intervention threshold for the 1st and 2nd generation, especially if it concerns the wintering larvae, can also be evaluated with a sampling of infested shoots / organs which is equal to 5%.
If we consider the flight thresholds of the traps against the larvae of the generation (June-July) we intervene, after about two weeks from exceeding the threshold, with Bacillus thuringiensis ssp. kurstaki (treatments must be at least two). Against the larvae of the 2nd generation, after about a week, the threshold is exceeded. Consider also that the treatment against the 1st generation of Carpocapsa also corresponds to the intervention against the 1st generation of embroiderers (Pandemis and Archips).
It is interesting to note the evolution that can give, furthermore, the development of forecasting models to predict the moment of development of the pest.