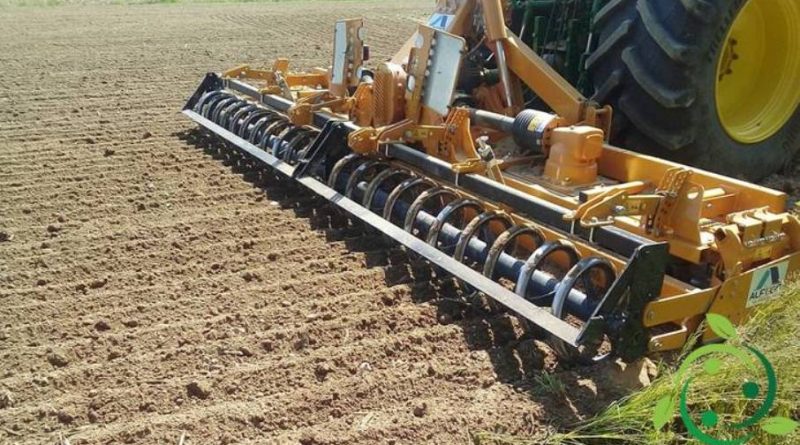 The harrow, also known as frangizolle, is an agricultural tool carried or pulled by a tractor to carry out a process known as harrowing.
The invention of the harrow dates back to very ancient times and the tool was already part of the endowment of agricultural traditions of some countries both in the East and in the West.
It is defined as a harrow when the implement is of the light type and the hydraulic lift in the tractor can lift it during transport. The harrow is towed when it is heavier and is pulled by the tractor through the tow hook.
The harrow is a tool that can be used, after plowing, to break up the macro clods formed by it in order to prepare the soil for sowing, or it can be used directly, in the presence of lighter soils such as unique tool and in any case when there is no interest in working deep and with more conservative techniques of the soil as in the minimum tillage.
The use of the harrow can also be done to bury the fertilizer spread on the ground or to break the turf.
In the event that the harrow has to work on more solid soils this is burdened by weights, placed specially on it, to increase the capacity to chop the clods and to put more pressure on the soil to be worked.
There are different types of harrows linked both to different technical solutions and to different agronomic needs. In summary we list the most common:
– Rigid tooth harrow: which represents the most traditional tool and is formed by a framework to which iron points are attached, often slightly bent backwards;

– Grubber harrow: tool consisting of a few tips, or anchors, but larger in size and used exclusively for intermediate work on rather zolloso soils, owes its name to its property of weeding the weeds, moving the soil and exposing the roots;
– Harrow with vibrating teeth: in this tool the teeth are not fixed but elastic, its functions are intermediate between those of the grubber and the traditional harrow with rigid teeth;
– Mesh harrow: tool with functions similar to those of the harrow with stiff teeth, but poorer performance: in practice it was used above all in the past, today it is used only for spreading sowing or fertilizing;
– Disc harrow: in this case the working organ is made up of two or more sets of gear wheels and cutting discs, a distinction is made between straight discs (frangizolle) and oblique discs (morgano or smorgano), with functions similar to the previous ones but suitable for less tenacious soils; these tools exist in different versions based on the weight and size of the discs, and therefore more or less suitable for various purposes;
– Rotary harrow: it differs from the others in that in this case its mechanical action on the ground is not due to the dragging but to the rotation imparted by the power take-off of the tractor with horizontal drums equipped with vertical teeth (knives), it is a decidedly similar machine to the cutter with some advantages (such as the absence of compaction) and some disadvantage (the need for land in particular mechanical conditions) with respect to this. Compared to the actual harrows it has in common the fundamental function of disintegrating the clods of land, but not the landfill: it also has an enormously lower hourly productivity and requires even higher power and consumption, but in appropriate cases allows you to make a effective refinement where the action of traditional harrows is insufficient or negligible.