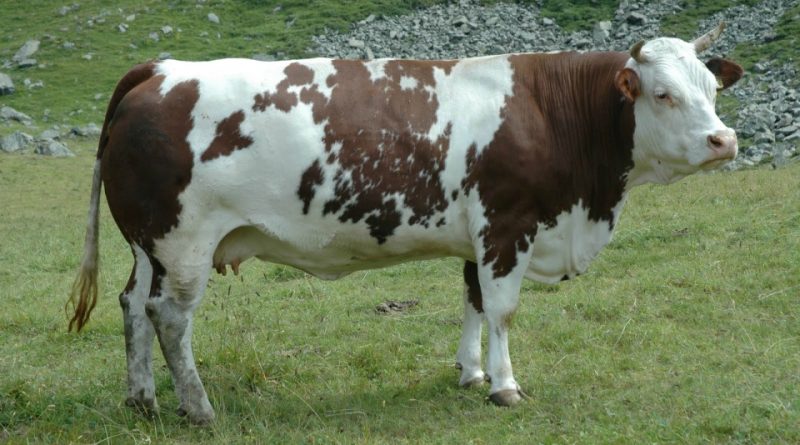 The Red Pied Valdostana is an Italian bovine breed (Bos taurus Linnaeus, 1758) originating from the Valle d’Aosta, with a dual aptitude especially for the production of milk.

Geographical and area distribution –
The Red Pied Valdostana which is known in French as Valdostaine pie rouge is an autochthonous bovine breed of the Valle D’Aosta which is the Italian region where almost all of its heads are bred (about 85%) and for most of the rest in areas contiguous.

Morphology –
This breed is recognized for having a deep red coat, tending to violet, with light spots that somewhat recalls the characters of the Swiss Evolène breed with which it has a noticeable inbreeding. The head is white with red ears; rarely there are red spots on the head. Ventral limbs and arts are generally white.
The muzzle is rosy, the horns are short and thick, with a waxy yellow color like the hoofs.
It is a medium-sized breed, with a height at the withers of 130 cm for a weight of 500 kg for cows and 135 cm for 650 kg for bulls.
They are therefore animals with a massive and muscular silhouette.

Production aptitude –
The Red Pied Valdostana is a dual-purpose breed with prevalence for milk production and has adapted very well to the difficult breeding environment which includes mountain pastures at over 2,500 m. above sea level and with transhumance system with the full summer outdoors on the Alps.
Although it is one of the few indigenous Italian breeds with a marked dairy aptitude, it also stands out for its good meat production and robustness. In general it produces a rich content of milk proteins and is very appreciated in the meat sector.
The breed is characterized, moreover, by the high motor capacity for movements, for grazing even in areas that are not very productive and for resistance to pathologies.