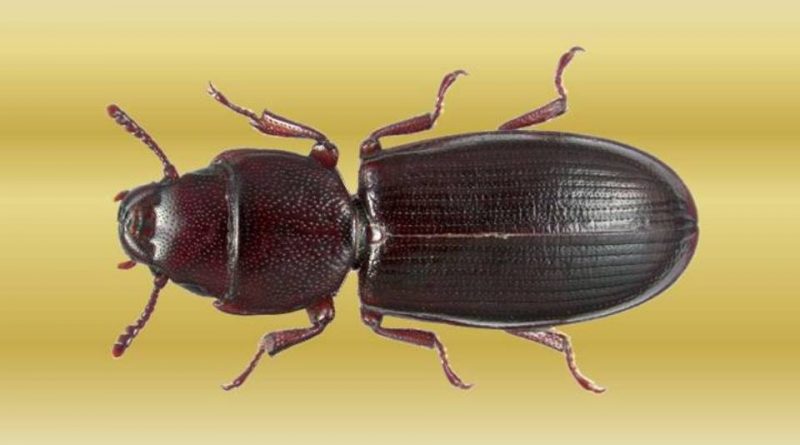 Geographical Distribution and Habitat –
This cosmopolitan insect finds its ideal habitat, where it creates also important infestations, in the mills, in the deposits of cereals, silos, warehouses, railway wagons used for the transport of cereals, etc.
The foods that it attacks are represented by: Cariossidi, Flours and other derivatives, Dried fruits (Peanuts, Chestnuts, Walnuts, etc.).

Morphology –
The cadelle beetle is a beetle that reaches up to 11 mm in length.
It has a well developed head and the color of the blackish-brown livery is brilliant in the dorsal and reddish-brown part, like the legs and antennae, in the ventral part.
The abdomen is covered by the elytrons furrowed by longitudinal grooves. There is an obvious narrowing between the abdomen and the chest. From the chest two pointed sculptures are carried to the sides of the head.
The larvae have dimensions of 12-15 mm, white-yellowish in color and with head, prothorax and last abdominal segment (which is prolonged in two processes) dark and two dark points on the first three segments of the body. Furthermore two dark hooks are located at the last urite.

Attitude and biological cycle –
The biological cycle of Tenebroides mauritanicus begins with the deposition of the eggs which are deposited in groups every two weeks and for periods of one year and different times. In total the female can lay from 500 to 1200 eggs on the substrates that will act as a development substrate for the larvae.
Once born the larvae grow up to 18 mm. These pupate far from the substrate in tunnels that they dig into the wood or cork. In temperate climates one generation develops per year and in some cases even two.
The adult, who can live up to two years, has phytophagous eating habits (feeds on foodstuffs) and carnivorous habits (larvae and pupae of generally granivorous insects and feeds on the remains of the dead ones).

Ecological Role –
Cadelle beetle is one of the most long-lived insects that attacks stored grain and is very destructive and easily dispersed. The larvae of this insect, above all once, frequently infested the biscuits of the ships during the long crossings.
The damage, however almost never serious, is caused by the trophic action of the larvae and partly by the adults who feed on the foodstuffs described.
Among the favorite foods, as mentioned, we remember peanuts, oats, oatmeal, cocoa, beans in large masses, wheat flour, wheat (whole and broken), sultanas, raisins, sorghum, soy (seeds and flour), groats, nutmeg, corn, etc.
To reduce the damage associated with these infestations, some precautions must be taken which often must be above all preventive in nature:
– the storage rooms must be perfectly impenetrable to insects. Doors and windows must have arrangements that allow them to be hermetically sealed. The same building must also be isolated in the foundations, to allow for possible disinfestation fumigations, even under pressure; the windows must be equipped with fine-meshed metal or nylon nets to prevent the entry of adult insects.
In addition, in warehouses and processing rooms they find effective application:
– food traps;
– electric discharge light traps;
– sexual traps: these are particularly effective against Lepidoptera.
The use of traps is useful for obtaining different results:
– mass capture: in this way the numerical consistency of the population is reduced, by capturing the males who can no longer perform mating;
– monitoring capture: in this way the entity of the population is identified and the development cycle is followed in order to determine the intervention threshold. This allows the identification of the most propitious moment to intervene with pesticides and only when the size of the population is such as to cause real economic damage.
Regarding the threshold of intervention this varies from 1 to 2 insects per trap depending on the phytophagous considered. Pest control is carried out with fumigants or with residual insecticides; it can be done both with current infestations and with empty rooms, for preventive purposes.
The intervention with the fumigating agents must be carried out by specialized personnel, with prior authorization from the Police Headquarters, the A.S.L., or the Harbor Master’s Office.
It should also be remembered that doses and periods of exposure must be strictly observed to prevent the stored product from taking on odors which are then also transmitted to bread and other derivatives.
Moreover the applications must avoid the onset of phenomena of resistance and it is also advisable to alternate the use of the active ingredients, to reduce these phenomena.
In recent times, however, new methods are being used that take into account the controlled atmosphere and refrigeration.
The advantage of these methodologies is to obtain foods that have no chemical residues.
To carry out these methods it is necessary to equip some specially built and naturally watertight structures.
The controlled atmosphere technique is carried out with the use of nitrogen or carbon dioxide in place of oxygen.
Conservation could also be integrated, ie using both techniques: low temperatures associated with controlled atmosphere.