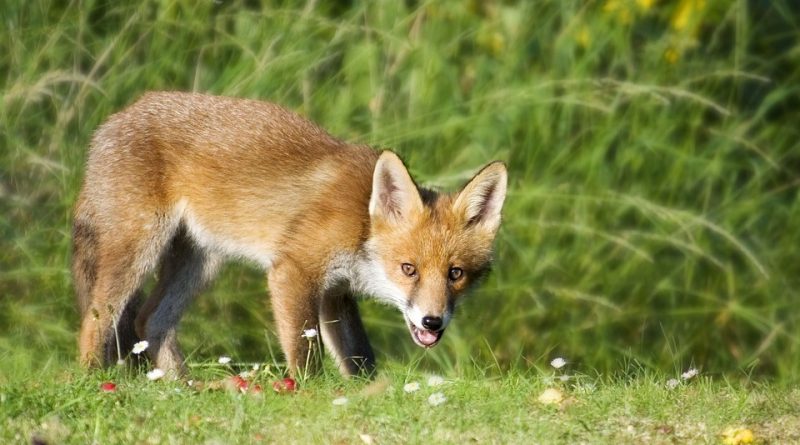 The red fox or simply fox (Vulpes vulpes Linnaeus, 1758) is a mammal belonging to the Canidae family.

Geographical Distribution and Habitat –
The red fox is a species widespread throughout Europe and Palearctic Asia, southeastern Asia and North America. In Italy it is present almost everywhere.
The natural habitat of the Fox is that of the wooded areas even if it does not disdain areas near the cultivated areas or the houses. In the mountains he prefers woods and areas rich in hiding places over 2,500 meters above sea level.
It is a nocturnal animal, but lives undisturbed even during the day, sheltering under bushes, in small ditches, in burrows dug by himself or in burrows of badgers or abandoned porcupines. 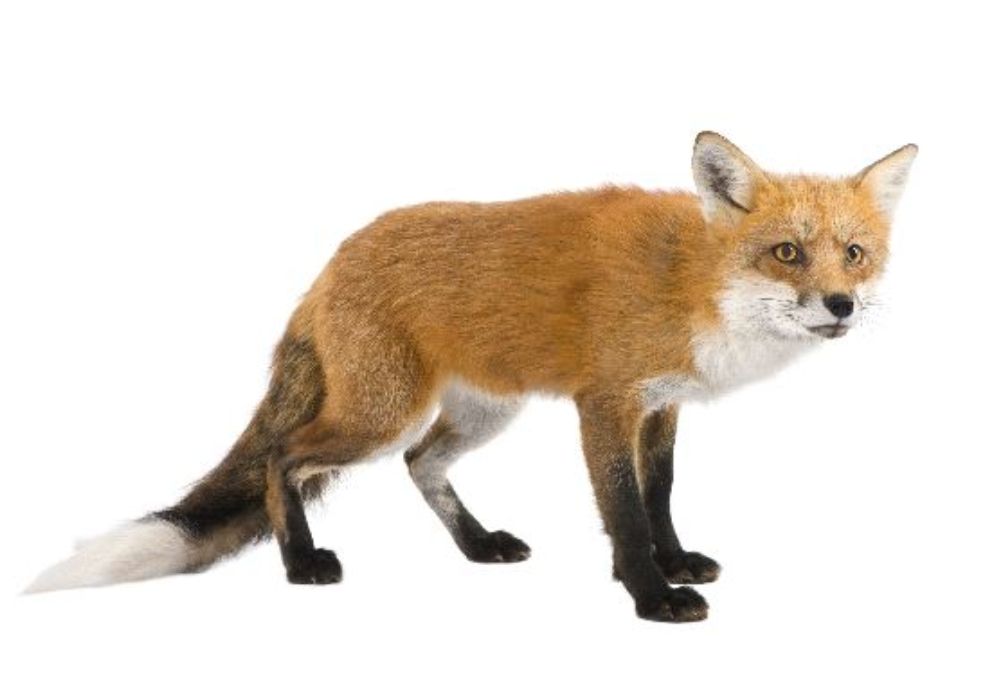 Description –
The fox is a medium-sized dog that has a long and tapering snout, straight, pointed and black ears in the back and short legs. Its appearance is pleasant, its thick fur is long, the tail soft and the color of the hair can change with the seasons. The predominant color is the fawn tending to red which covers almost entirely the body of the animal, the distinctive character par excellence is instead the tail, long and with thick pelt.
The body length, excluding the tail, is 58-70 cm, the tail 32-48cm, with a height of 35-45 cm and a weight of 6-10kg.
The average life of a fox is around 2 years even if these animals can reach 8-10 years.

Biology –
The Fox is an animal that lives in pairs, with puppies, although sometimes it is possible to observe solitary specimens or in groups of 4 or 6 adults.
The male marks the territory systematically and communicates with his peers through sound, visual, tactile and olfactory signals. A fox can recognize another specimen from the smell, as well as deciphering its hierarchical rank and social level. The odorous substance secreted by this gland is composed of thiols and thioacetate, very similar, even if possessed in smaller quantities, to those by skunks.
It is significant to point out that, in this species, the couple tends to reform each year and that the male usually actively participates in the care and breeding of offspring, procuring food and defending the puppies from possible predators.
The period of the loves of the Vulpes vulpes is very variable and changes according to the latitude. In Italy this period coincides with winter, between December and February. The parts generally take place between March and April. The female, after a gestation that lasts 7 weeks, gives birth, in a den, on average from 3 to 5 small, which are breastfed for a month.
The puppies, at the end of this period, begin to feed on the first solid foods, consisting of foods pre-digested by the mother and then regurgitated. This technique is very advantageous as it allows to feed the litter without bringing the carcasses close to the den and at the same time it makes the little ones not have to move in search of food, exposing themselves to possible dangers.
The mother, during the first two weeks of life, does not abandon the puppies, devoting herself entirely to their breastfeeding; in this period the female is fed by the male. In case of danger or disturbing factors, the female does not hesitate to transport her children to safer places. The young come out of the den for the first time around the fourth or fifth week and have a very playful character.
Family members communicate with each other through body language and the emission of different sounds. They have a wide range of vocalizations used according to the most specific situations. They can also communicate with each other through the sense of smell and therefore often mark the food and the land with urine. They often use burrows used by animals such as badgers or rabbits. Badgers are among the main enemies of foxes and often threaten to devour puppies.

Ecological Role –
The species Vulpes vulpes is the wild carnivore with the largest distribution area and although it is classified as a carnivore it is an omnivorous animal and a great opportunist. It is able to hunt prey of different sizes, from insects of 0,5 cm of length to birds of 1,5 m of wingspan.
This mammal feeds on invertebrates, small mammals, birds, eggs and small amphibians and reptiles. Particularly welcome plants include berries and other types of fruit. They can also feed on carrion and anything edible they encounter.
The amount of food you consume during the day varies from 0.5 kg to 1 kg. Red foxes have a small stomach compared to their size and for this reason they can only eat half of what dogs or wolves can ingest compared to their size.
Furthermore, in times of abundance the foxes set aside food supplies for the future, burying them in small holes of 5–10 cm. They tend to hide food in many small hiding places rather than in one place, and this, most likely, to avoid losing the entire supply at once.
The fox game is solitary. With their refined sense of hearing, they can spot small mammals in the tall, thick grass leaping into the air and ending up on them. They can also hunt prey such as rabbits by lurking stealthily and silently on them. Foxes tend to have a very obsessive attitude towards food and rarely share it with other specimens: the behavior of the mating and mating period with their puppies is an exception.
Foxes are territorial animals and defend their territory in pairs during the winter and alone during the summer.
Their territory can extend up to 50 km² but can be reduced to areas with plenty of food.
The ecological relationship of the fox with man is complex: on the one hand they are considered a problem, as they prefer small poultry and poultry, on the other they have always been admired for their beauty and cunning and are very useful especially in the agricultural field for their ability to free the fields from various species of rodents, which damage the crops. However this species has a long history of relationships with humans, having been actively hunted as a pest or fur, where for this use it is the most persecuted animal.
This species originated from smaller ancestors in Eurasia during the middle Villafranchiano and colonized North America shortly after the Wisconsin glaciation.
Despite its informal name, the species is not always red, having been reported both albino and melanic specimens.
Within this species, 45 subspecies are recognized, which are divided into two categories: the large northern red foxes and the small southern red foxes of the Asian and Middle Eastern deserts.
Today the red fox is classified as a species at minimal risk by the IUCN. Its range has expanded along with the human one, having been introduced in Australia, where it is considered harmful for marsupials and native birds. Because of its ecological damage on the latter continent, the species is considered one of the worst invasive species.