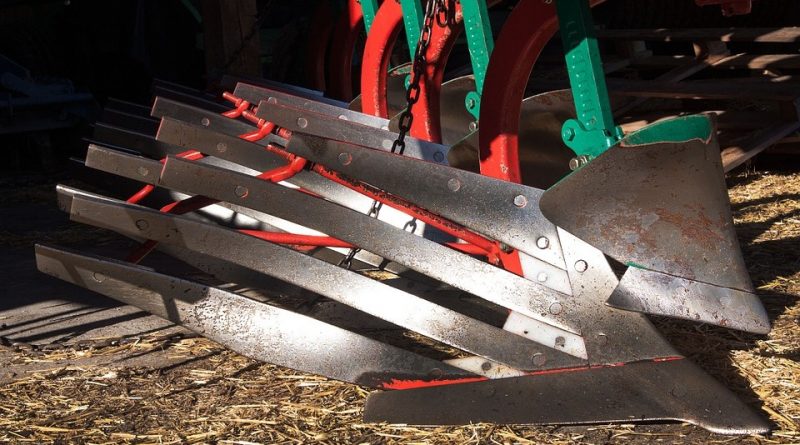 The plow is an instrument used in agriculture since remote ages to move and prepare the ground for subsequent processing or directly for sowing.
Documents that attest to the creation of the plow make us understand how this tool was born and evolved independently in different areas of the world even if for some it is possible that there have been exchanges of knowledge and experiences.
The plow that in the historical sense is a sort of evolution of the pickaxe, was once pulled by oxen and horses for the more affluent, while for the less wealthy it was driven directly by people, and today, in modernized countries, with mechanical tractors and walking tractors.
Over time the plow has undergone several evolutions especially in the use of materials. In this way we move from the first plows mainly made of wood to the more modern ones made with metals.
Plowing simultaneously performs multiple tasks:
– used to incorporate the remains of the previous crop in the soil;
– destroy the presence of weeds;
– break up and break up the ground in anticipation of the next sowing (usually after exposure to atmospheric agents and after further processing with other tools).
In general, the working organs of an ordinary tipper plow (vane plow) are: coulter or knife, ploughshare, moldboard.
The coulter is generally a sturdy knife capable of cutting the soil along a direction perpendicular to the ground level; sometimes it is a disk with a smooth or toothed edge (for peaty soils or with thick grassy or for green manure or fertilizer) or it is replaced by a chisel tip, mounted on the edge of the share or lath (for land tending to sandy). The ploughshare is a trapezoidal shaped plate, capable of cutting the clod of soil along a direction parallel to the ground level. The moldboard is a cylindrical or helical plate, closely connected to the ploughshare, and serves to turn and / or break (sandy soils) the clod of freshly cut soil; it consists of a main part and an appendix, which perform, respectively, a rotation of the slice of land equal to 90 ° and 45 °.
In some cases the moldboard plow has avanvomere, that is, a small ploughshare attached to the bure, anteriorly, near the coulter. This covers the purpose of cutting the superficial layer of the soil, 5-6 cm thick, parallel to the ground level, and is especially useful for the complete burial of the turf.

The organs of connection of a plow in versio are: the bure, which constitutes the framework; the sole, which helps to give longitudinal stability to the plow, keeping both the ploughsuck and the moldboard together and connecting them to the bure and the heel; the heel which, resting on the ground, protects the sole; the chest, which connects the sole, the body of the plow and the bure; the bridle, which connects the coulter to the bure. The bure sometimes rests on load-bearing wheels, in number of one (semi-mounted plows), two or three (towed plows). The moldboard plow can be a single-furrow plow, if it creates a single groove for each passage, or a polyvumere, if it generates more grooves for each passage. The single-furrow plow is the burglary, that is a plow used to perform the deep processing of the soil, before planting tree crops.
A variant of this type of plow is the reversible plow and the double plow (also called voltorecchio plow).
These plows are moldboard plows that perform equal plowing, which consists in turning the clod of land always on the same side, both along the forward passage and along the return one. Both are made up of left and right working bodies; in the reversible plow these working bodies are installed symmetrically on a single bure, while in the double plow they are installed on two distinct buri and arranged between them so as to form an angle between 90 and 180 °. The rotation of the bure or buri with respect to the longitudinal axis of the plow is obtained hydraulically and controlled by the hydraulic system of the tractor.
Another type of plow is the disc plow.
A normal disc plow consists of 1-6 spherical caps, installed idle on independent pins; useful for working hard and rich in skeleton soils, it produces a high crushing, reaching the maximum working depth of about 30 cm. A vertical-type disc plow consists of 4-15 spherical caps, installed idle on the same axis, and reaches a maximum working depth of about 20 cm. The penetration angle, between the axis of the shell and the direction of advancement, is about 45 °, while the angle of attack, between the plane of the shell and the normal on the ground level, is variable from 15 at 25 °.
Another type of plow is the gravel plow.
This is a mounted or towed plow, consisting of two sides, which turn the ground on both sides, in order to create a water ditch or drainage channel, bordered by stable banks.
Sewer plow.
The sewer plow (or mole or drainage) is a worn tool, essentially consisting of a thin coulter, about 80 cm long and bearing at the lower end a horizontal cylinder with a sharp head and shaped like a flute beak; this cylinder, embedded in the ground and towed, digs a tunnel parallel to the ground level, which favors the deep drainage of the waters.
Other variations of plow can be given by the balance plow, subsoiler, double, polivo mere, etc. Each type of tool meets certain agronomic and pedological requirements.