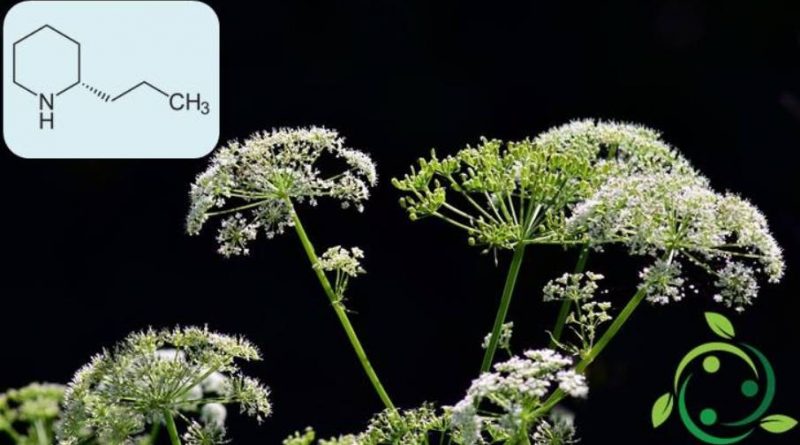 Conine, whose term in the official IUPAC nomenclature is: 2-propylpiperidine and whose brute or molecular formula is: C8H17N, is an alkaloid isolated from the seeds and fruits of the hemlock (Conium maculatum L., 1753), which occurs as an oily, colorless or yellow liquid, with a pungent odor and a burning taste, with a strong toxic action; its hydrobromide has antispasmodic and sedative action.
It is present in the hemlock in a proportion of 2% in fruits and 0.5% in leaves.
The toxic properties of the conine were known since ancient times; it was in fact already used by the Greeks as a poison to be given to those condemned to death. Socrates himself was sentenced to drink a hemlock drink.
In past times coniine was also used, at lower doses, as a narcotic, antispasmodic, and more recently as an analgesic and painkiller.
Conine was the first alkaloid to be synthesized by Albert Ladenburg in 1886.
From the biological point of view, coniina is a neurotoxin that acts at the level of neuromuscular synapses, determining muscular paralysis, in particular of the respiratory system.

The mechanism occurs by blocking the cholinergic receptors on the post synaptic membrane at the level of the neuromuscular junction, preventing acetylcholine from binding.
For this reason the receptors are blocked (but not activated) and cannot participate in the generation of the nerve impulse thus preventing a new contraction of the muscle.
This results in death by asphyxiation and its toxicity is quite high, bearing in mind that it is a vegetable compound: LD 50 = 1 mg / kg (oral, in the mouse).
The symptoms, shortly after taking hemlock, where the conine is present, manifest themselves with burning in the mouth, difficulty in swallowing, nausea, dilation of the pupils and weakness in the legs.
If the dose taken is massive, muscle paralysis occurs and therefore death due to respiratory arrest and asphyxia.
In the case of poisoning it is necessary to immediately induce vomiting in order to reduce the amount absorbed and, if possible, carry out a gastric lavage to which the administration of a purgative and activated carbon is added.
The method of taking coniine is usually orally, but also very easily through the skin.