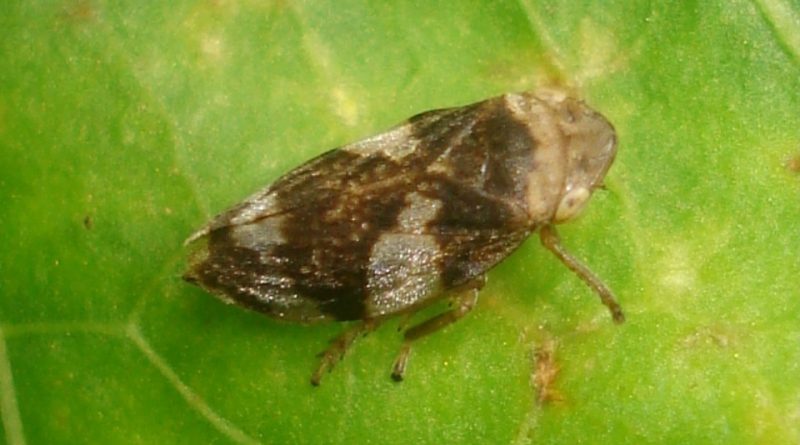 Systematics –
From a systematic point of view, it belongs to the Eukaryota Domain, Animalia Kingdom, Subgenus Eumetazoa, Bilateria Branch, Phylum Arthropoda, Insecta Class, Rhynchota Order, Aphrophoridae Family and then to the Genus Philaenus and the P. spumarius Species.

Geographical Distribution and Habitat –
Philaenus spumarius is a fairly common and widespread insect. Its original distribution was limited to the paleearic ecozone. It is present in most of Europe, in North Africa, partly in Russia, in Afghanistan and in Japan, and has also been introduced in North America and Canada.
It is an insect that can tolerate a wide range of environmental factors that lead it to colonize different habitats (parks, meadows, gardens, etc.) living and reproducing in almost all agricultural and forest areas. It is absent only in very wet or very dry habitats.

Morphology –
Philaenus spumarius is an insect that at the adult stage reaches a length of 5-7 millimeters, with most females larger than males.
They are also polymorphic insects with a very variable coloration of the body (about 20 different colors are known); they are usually however yellowish, brownish or black, with brighter spots on a dark background, but also with dark marks on a lighter background.

Attitude and biological cycle –
The biological cycle begins with the laying of the eggs, singly or in groups, through an ovipositor, in the bark of the trees (where the larvae will then feed) during the summer period. A single female can lay from 350 to 400 eggs. In unfavorable climatic times, these insects can survive in the form of eggs.
The eggs pass the winter and in the spring period they hatch, releasing the nymphs that are carried on the herbaceous plants.
In the summer, adults appear who can also invade the trees on which they arrive by flying or jumping. Their most surprising way of moving is linked to a great ability to jump, which is also useful for escaping predators.
The larvae feed instead of lymph, which they suck by means of the rostrum. In the viscous liquid they release, as waste from the intestine, they enter the air with bronchial openings, which produces the bubbles that constitute a singular shelter.
These foam shelters protect them from predators and allow, among other things, to provide adequate humidity and temperature for development, so the mortality of these insects remains low even in bad weather. The larval stage lasts about 50 days. Adults leave these nests of foam only when they are completely dry, a period that lasts about ten days. The females will mate soon after.
As far as attitudes are concerned, they are polyphagous insects but mainly prefer herbaceous species (especially Poaceae), reed plants (Juncaceae), and sometimes tree species. In total they were found on over 170 host plants.
Philaenus spumarius is occasionally harmful to vines, medics, strawberries and ornamental plants (such as roses) and vegetables.

Ecological Role –
Philaenus spumarius is therefore a polyphagous insect that can cause some damage to crops or ornamental plants. The damage can be direct or indirect. The direct ones are related to nutrition bites that can cause discoloration and deformation; the indirect ones are mostly due to the production of the foam (which can spoil the products causing the depreciation of the commercial value) and as carriers of pathogenic agents.
Among the indirect damage, it should be remembered above all that Philaenus spumarius is the vector of Xylella fastidiosa, the etiological agent of Pierce’s disease, a vascular bacteriosis that affects the vine causing the yellowing of leaves that tend to brown until the final fall (phylloptosis) . Furthermore, Xylella fastidiosa is the cause of many plant diseases such as variegated chlorosis (CVC) of citrus fruits. Furthermore, the bacterium carried by P. spumarius also triggers diseases in other plants such as peach and as the burning of oleander leaves. Philaenus spumarius is believed to be the vector responsible for the spread, in Salento’s olive groves, of a particular bacterial strain of Xylella fastidiosa spp. pauca which is associated with the complex of rapid olive desiccation (CoDiRO).
The containment interventions of this insect are carried out only in cases of massive attacks using pyrethrins extracted from Chrysanthemum cinerariaefolium or synthetic pyrethroids.