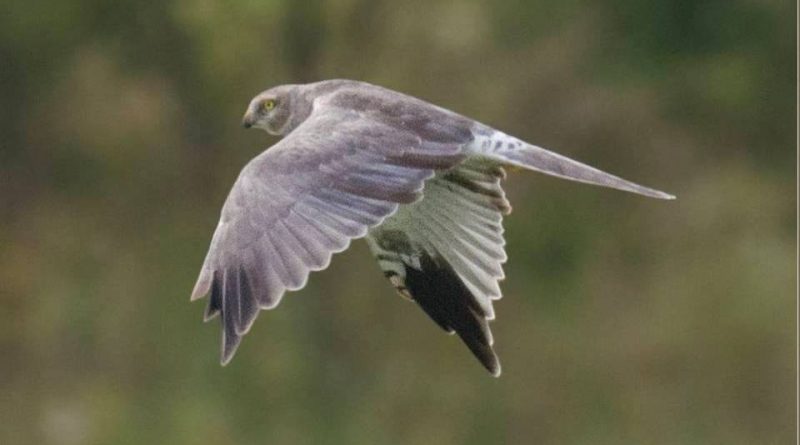 The Pallid Harrier (Circus macrourus (S. G. Gmelin, 1770)) is a bird belonging to the Accipitridae family.

Systematics –
From the systematic point of view it belongs to the Eukaryota Domain, Animalia Kingdom, Phylum Chordata, Aves Class, Accipitriformes Order, Accipitridae Family, Accipitrinae Subfamily and therefore to the Genus Circus and the C macrourus species.

Geographical Distribution and Habitat –
The Pallid Harrier is a bird present in a territory between Eastern Europe and Central Asia Nests. It winters above all in India and south-east Asia. In Italy it can sometimes be observed as a migrator.
The nesting of these birds takes place in the grassy plains, in the dry steppes or in the tree-lined steppes, often near small rivers, lakes or wetlands.
The breeding area goes from Ukraine and southern Russia to the north-western regions of China and to the western regions of Mongolia.
In winter it migrates to the Indian peninsula and Africa, south of the Sahara and east of Lake Chad. Some birds, a small minority, winter on the edge of the breeding area in Turkey, the Balkans, Iran and south of the Caspian Sea.
North of their areas, small populations also reproduce in boreal forests and in the tundra, where they find suitable sites within the clearings. In winter the Circus macrourus occupies the same kind of habitat, but it also settles in cultivated fields of cereals, in the open wooded areas and on the highlands up to 2000 meters of altitude. They also make occasional visits both in the marshes and in the rice fields. 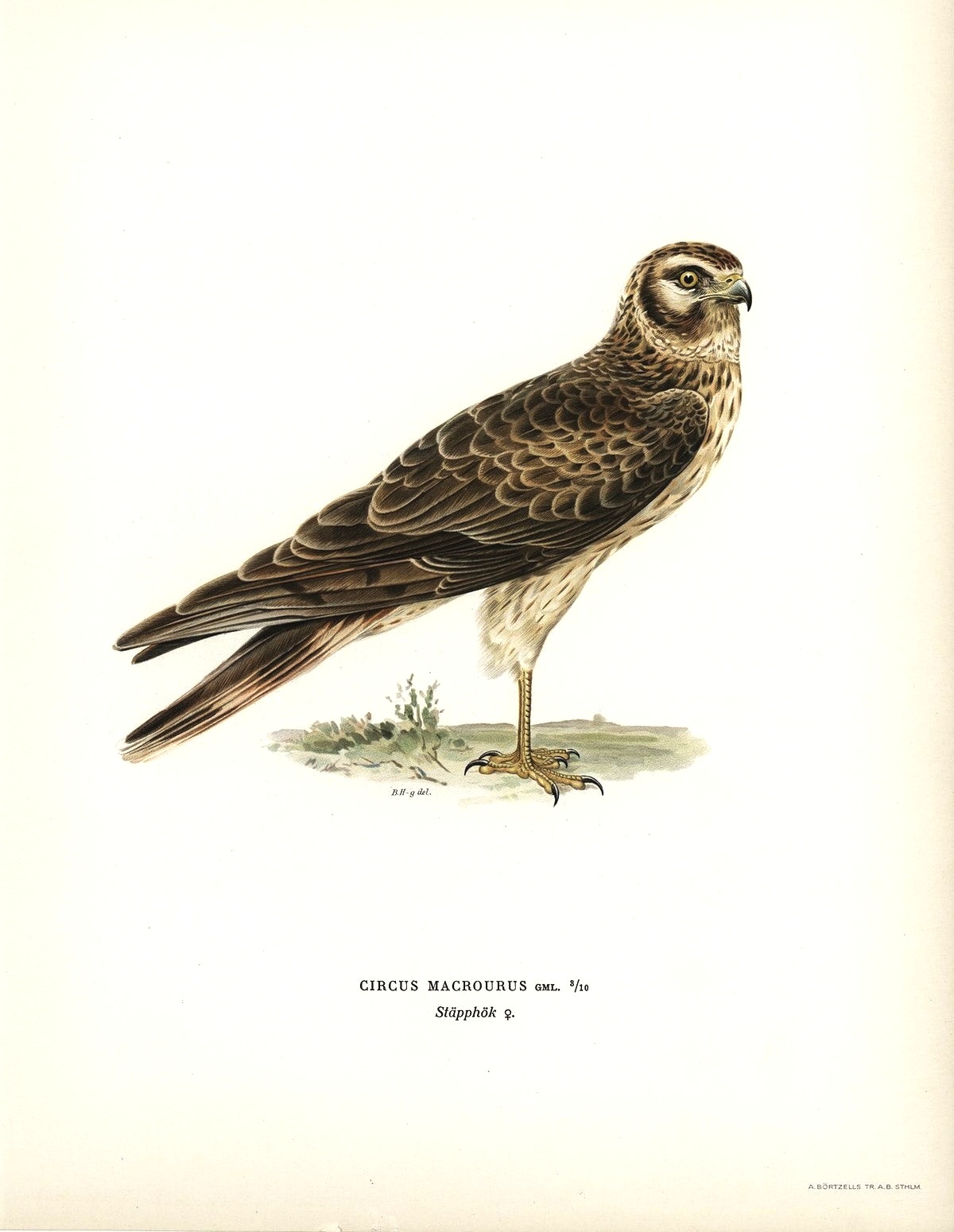 Description –
Circus macrourus is a bird very similar to the lesser Albanella and the real one but the color in the mashio is much clearer. It has a length of 40 – 48 cm and an average wingspan of 95 – 110 cm; the weight is 240-410 g in the male and 400-550 g in the female.
There is a high sexual dimorphism.
The males have a very light plumage and the most adult specimens can be recognized by their white inferior parts which contrast with the black tips of some primaries and the upper parts which are light gray and on which stand the black tips of the wings, which therefore it gives a different appearance to that of the lesser harrier or the harrier. The irises and legs are yellow.
The color of the females is brown instead, with the lower parts lighter furrowed by dark stripes. The females of this species are distinguished from other harpers by the motifs that adorn the face. The black spot that adorns the auricular region is much more developed in the direction of the chin and beak. Below it is a light collar that surrounds the base of the neck. Another difference is due to the number of bands marking the secondary ones. In the pale harrier there are three, while in the lesser harness the complete ones are two.
The juveniles of the Circus macrourus are very similar to the females, but they have the inferior parts and the underala of brown-rust color without strips. As in their mothers, the facial motifs and the light collar are particularly visible and constitute essential characters for identification.
The definitive plumage is assumed towards the two years.
Another distinctive feature is that of the item.
In general, the Pallid Harrier is somewhat silent outside the breeding season. However, it has a voice similar to that of the real harrier and the lesser hen, with the emission of the characteristic yik-yik-yik striduli it produces when it is in flight; moreover, the female produces a discreet piih in recognition when the male takes her food to the nest. During the nuptial flight, this bird gives a sharp and loud cry.

Biology –
The Circus macrourus reaches sexual maturity around 2 or 3 years, although sometimes there are cases of earlier reproduction.
When they arrive in the nesting places the couples are already formed, after they mark and delimit their territory with a series of aerial parades entirely similar to those of the Circus pygargus. The pairs nest very close together and can also form scattered colonies.
The nests are located on the ground hidden in the grass and often near mirrors of water.
The females lay, in a period ranging from late April to early May, 4 to 5 eggs, which it hatches on its own during a period of 29 or 30 days. The young will remain in the nest for a period of 33 – 45 days. After the flight, the 2 or 3 survivors continue to depend on their parents for food for another 2-3 weeks.
As the period ends in late August – early September, these birds leave their nesting grounds to migrate to areas with milder climates and to the south.
The migration front is quite wide and therefore the density of birds is low.
It also happens that the migratory routes are not the same; birds that descend into Africa pass through Turkey in October and November, but when they return, in spring, they follow a more western route, passing through North Africa and Tunisia.
The populations that live in the western part of the nesting area migrate to Africa south of the Sahara, while those in the eastern part go to the Indian subcontinent (Afghanistan, Pakistan, India, Bangladesh, Nepal and Burma).

Ecological Role –
The Pallid Harrier spend most of their day hunting with shifts that can reach up to 20 kilometers around their favorite perch. Their flight is quite low and they swoop down to capture the prey.
This bird mainly feeds on small birds such as larks and occasionally chickens; their prevailing diet is constituted by rodents, in particular of lemmings and they also feed on voles, shrews, citellos and hamsters. Occasionally, they eat lizards and insects.
The population density of these birds depends on various factors, many of which, due to changes in some habitats, seriously threaten their populations.
We recall that the Circus macrourus depends on the density of small rodent populations and the number of hatches carried to term often varies according to this criterion.
The Pallid Harrier are in sharp decline due to the degradation of their habitat and the conversion of grasslands into arable land. This factor contributes to the burning of dried herbs and the overpressure.
Also during the winter period, these birds are victims of pesticides and rodent products. The global population is estimated at between 9,000 and 15,000 pairs. In Eastern Europe (Azerbaijan, Western Russia, Turkey, Ukraine and Romania), the species is in sharp decline. In Moldavia and Belarus it has even completely disappeared. The main population of southern Russia has fallen by over 30% in the 1970s and 1990s. The number of specimens of the Asian populations seems to be more stable: in the north of Kazakhstan, between 1500 and 2000 couples have been counted, with densities that sometimes reach 25 specimens every 100 square kilometers. In the Almaty region these birds are locally abundant. For the most eastern areas of the area, information is lacking.
Unfortunately, based on these numbers, the IUCN has classified this species as “close to the threat”.