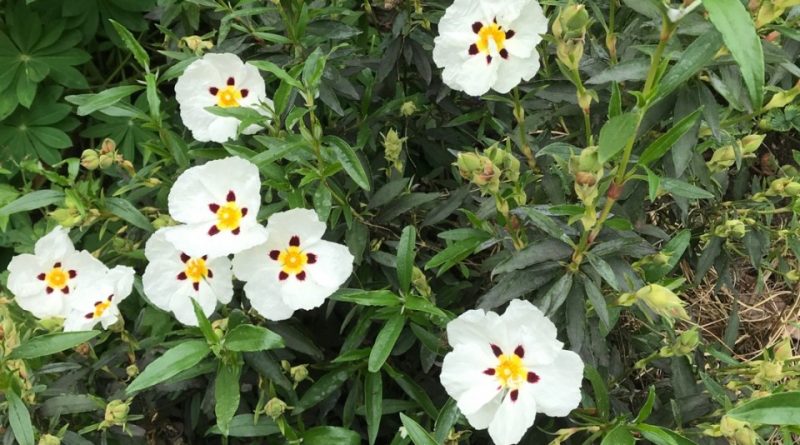 The Rockroses (Cistus ladanifer L., 1753) is a shrub species belonging to the Cistaceae family.

Systematics –
From the systematic point of view it belongs to the Eukaryota Domain, United Plantae, Magnoliophyta Division, Magnoliopsida Class, Violales Order, Cistaceae Family and therefore to the Cistus Genus and to the C. ladanifer Species.

Etymology –
The term Cistus comes from the Greek κίστη kíste give (in Dioscorides), which describes the characteristic of the ripe fruit, a capsule that expels seeds by opening them.
The specific epithet ladanifer comes from the Latin ladănum, in turn from the Greek λήδανον lédanon, a resinous exudate emitted by some plants and used as a fixative by the perfume industry, and to be carried, to produce: which produces Ladan.

Geographical Distribution and Habitat –
The Rockroses is a plant native to the western Mediterranean basin and is widespread in south-western Europe and in much of northern Africa. It is very widespread especially in Spain, Portugal and grows optimally throughout the Mediterranean area. Its habitat is that of the areas with full sun on well-drained soils, even poor, where the plant tolerates drought well and even maritime exposure. 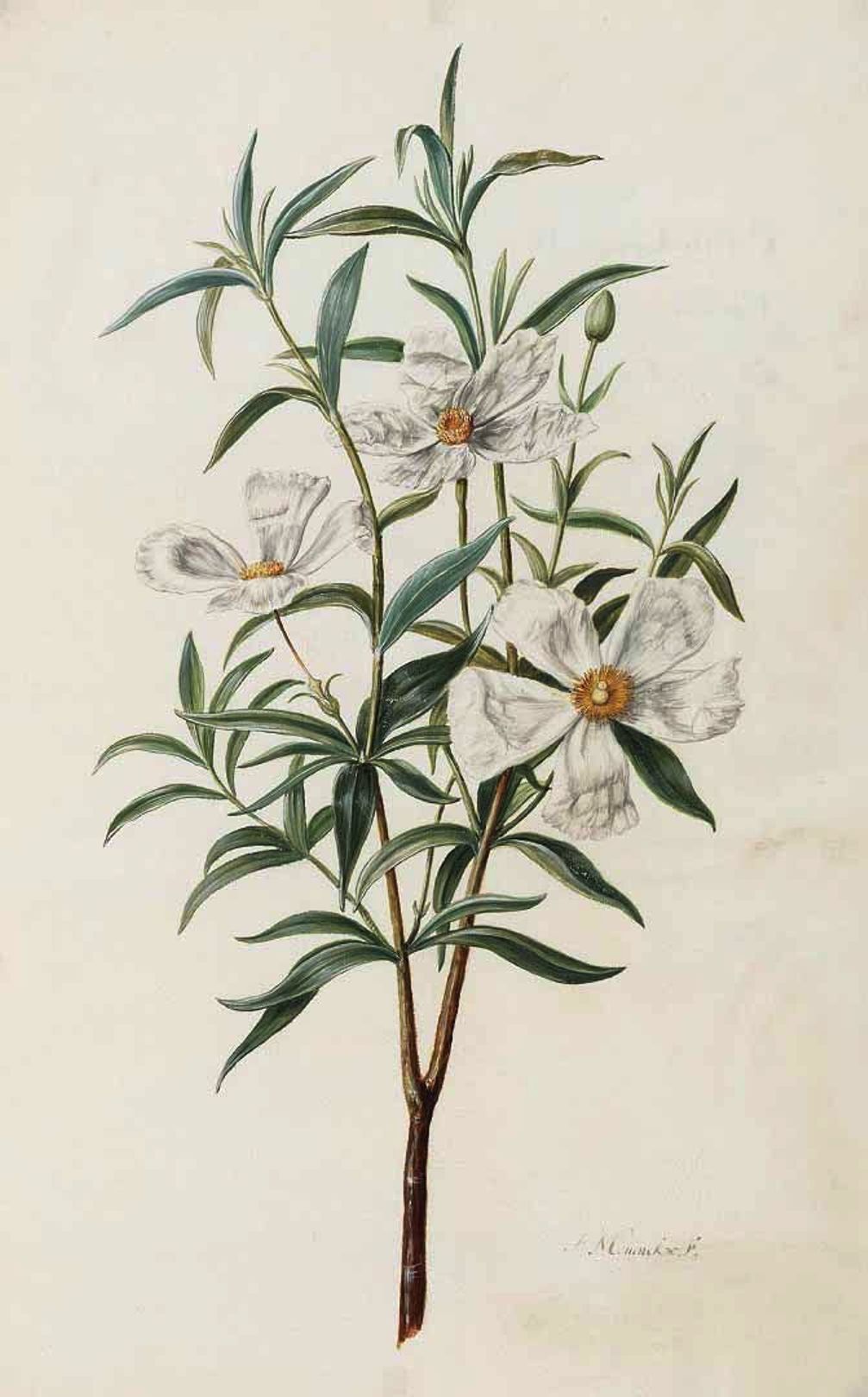 Description –
The Cistus ladanifer is an upright shrub that reaches heights of about two meters and an almost identical growth of the foliage, to complete its growth the plant takes from 4 to 8 years.
The leaves, which are about 10 cm long, are persistent linear or lanceolate, dark green on the upper side, and light green on the lower one. The foliage is covered with a sticky exudate due to a perfumed resin, known as labdanum (ladano).
The flowers are white, about 10 cm wide and arranged at the apex of the shorter lateral jets; the petals are five, large and very delicate, with stamens and yellow pistils. The plant is self-fertile, which means that both male and female flowers are present on the same individual.
Flowering occurs in the months of May-June with seeds that ripen in August and are small (about 1 mm) and collected in large number in capsules.

Cultivation –
The Cistus ladanifero should be grown in sunny areas and with loose, stony soil without water stagnation. The plant is also very resistant to cold, quite rustic, it can live without problems up to temperatures of -5 degrees. Even the drought does not create problems for the plant, in fact it can survive several days at high temperatures.
To get good results we recommend a medium-textured, well-drained soil with a medium rich in organic substance which can help to have a better flowering.
The pH of the soil can be either sub-acidic then with values ​​of 6-6.5 and sub-alkaline, values ​​of 7.5-8, but generally in neutral soils it is possible to obtain excellent results.
Once it has taken root, it does not need irrigation. Pruning after flowering can stimulate branching and increase leaf density.
the planting of the young Laudano plants is done in spring.
The flowering of the Laudano occurs in the summer and is particular: in fact, each flower blooms for only one day, but thanks to the great production it is possible to have a continuous flowering for several weeks.
The reproduction of the Laudano can be done by seed. The seeds harvested at their maturation must be grown in jars containing a soil made of sand and peat in equal parts with the addition of a small part of generic soil for sowing. Given the very small size of the seeds it is necessary to place them on the surface and cover them with a thin layer of soil and keep them at a constant temperature of about 18-19 degrees and the soil should be slightly damp, germination in this way will take place in 2-3 weeks . In the following spring the young plants can be planted. The multiplication of Cistus ladanifer can occur, however, also by semi-woody cutting or woody cutting.
To make semi-woody cuttings, proceed as follows:
The plant portions will be taken at the end of summer and must be at least 8cm long, they will be cultivated in pots of about 10cm in diameter filled with a soil composed of a part of sand, one of peat and a small part of generic soil for the sowing. The jars should be kept away in the winter season, so that they can develop and be ready for planting in the spring which will be done during the spring.
For the multiplication through woody cutting the parts of the plant will have to be taken at the beginning of autumn, September-October. The cuttings should be 10 to 12 cm long, they should be placed in a soil composed of equal parts of sand and peat. The cuts can be treated with rooting hormone powder to promote the production of roots. Keep the jars in a greenhouse or in a container and maintain an adequate temperature throughout the winter, when spring arrives the plants will be strong enough to be planted.
As far as pruning is concerned, this must be limited only to the removal of dry and diseased branches, operations are carried out in winter. The plant can be grown following a rounded shape, in this case at the end of the flowering the jets protruding from the canopy will be eliminated, the more external ones.

Uses and Traditions –
The Rockroses, due to its characteristics, is an ideal plant in rocky gardens and Mediterranean gardens, with low water and maintenance needs. Cysts are very popular in the UK, and are highly appreciated for their rusticity and adaptability, as well as for their aesthetic qualities.
The foliage, as mentioned, is covered with a sticky exudate due to the presence of the ladano which is a perfumed resin, used in herbal medicine and in perfumery.
This plant, like others of its kind, becomes fundamental in the resumption of vegetation after a fire. In fact it has been shown that the hard seminal integuments inhibit germination due to their impermeability, but that the effect of high temperatures due to fires, causing the splitting of integuments, is to allow the absorption of water and therefore favors indirectly germination. It has also been shown that in the genus Cistus the integrity of the integuments is naturally less with the aging of the seed, therefore, in the absence of fires, germination can still take place some years after dissemination. This could explain the ability of cysts to colonize abandoned fields not subject to periodic fires.
Another particular characteristic of the plant is the mycorrhizal association that is established with some species of fungi such as: Boletus edulis, Laccaria laccata and Boletus rhodoxanthus.

Preparation Mode –
The Rockroses is used for the extraction of the ladano which makes this plant a very sought-after essence in the commercial field in perfumery for the sweet aroma.