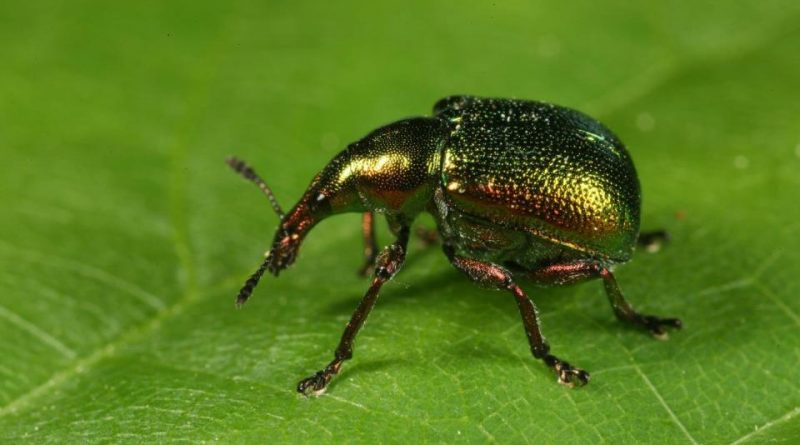 The vine leaf roller (Byctiscus betulae, Linnaeus 1758) is a beetle belonging to the family of Attelabidae.

Geographical Distribution and Habitat –
The vine leaf roller is a beetle widespread throughout Europe and is common in all Italian regions where it lives on vine, pear, linden and various other broadleaf and ornamental trees.

Morphology –
The adults of the Byctiscus betulae are small dark beetles, 6-8 and up to 10 mm long, with a livery of bluish, golden-green or brownish-green metallic reflections, but which tends mainly to dark green as they live on leafy plants dark to which they adapt to survive. In the juvenile stage (which lasts a few days) these insects have smaller dimensions and no more than 5 mm.
They have a robust armor that hides two pairs of wings underneath which are:
– the primary ones, of greater size, are elytrons, or sclerified wings that do not perform the function of flight, but rather that of protection of the secondary wings.
– The secondary ones, a second pair of wings characterized by smaller dimensions than the primary ones, but with the particular flying ability that allows these specimens to move quickly.
The larvae are apode and with the typical “C” shape.

Attitude and biological cycle –
The biological cycle of the Byctiscus betulae begins after the hatching of the eggs which takes place two weeks after the laying; from these arise larvae, without legs that immediately find nourishment and shelter in the appropriate places where they had been left.
In summer, with the fall of the leaves in which they had been sheltered until then (the so-called cigars) the larvae complete the metamorphosis in adult insects, then moving about 20 cm deep into the ground with the arrival of autumn and up to end of winter, where they exceed the frost period (wintering).
In spring and with the vegetative growth, in the May period, the adults emerge from the ground and move on the plants, in the areas with the presence of leaves and shoots, on which they practice incisions waiting for the mating period.
From this moment the female reaches the male and makes a hole inside the petiole of the leaf on which they are, then waits for it to dry; subsequently the male begins to roll it perpendicularly to the branch giving it the characteristic cigar shape, from which the homonymous name of the species derives. At this point the female seals everything with a glue she produced, to then deposit hundreds of eggs that, once opened, will repeat the entire biological cycle just like their predecessors.
The insect therefore makes only one annual generation and is very polyphagous, as it can affect the Vine, some Fruit Trees and many ornamental and forest Hardwoods.

Ecological Role –
The vine leaf roller is an insect that, despite choosing to live on various types of plants (vine, pear, linden, poplar, cherry and other broad-leaved trees) is practically harmless for agricultural production, as it only damages the leaves, treated as food or shelter, and not fruits or buds necessary for the production of farmers.
Furthermore the great infestations are very rare and, given its almost harmless presence, the chemical fight against this beetle is not recommended, as it would affect the biocoenoses of other insects and fauna.
If you want to decrease the presence of these insects, it is advisable to remove the leaves in the shape of a “cigar” in the spring, so as to bring future generations back into balance.
As said the damage caused is relatively drinking and is determined by the typical rolling of the leaf page which is caused by the withering of the leaf by the incisions made by the females on the foliar petiole without causing their detachment. The rolled leaves, held together by secretions emitted by the females themselves, look like hanging cigars that are particularly evident in the green leaf mass.