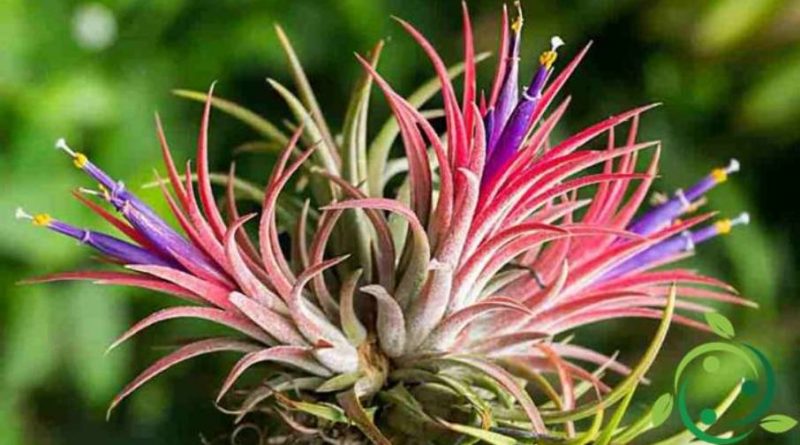 How to cultivate the Tillandsia

Tillandsia is a genus of plants belonging to the Bromeliaceae family, originating from Central America.
These plants are characterized by the particularity of being able to vegetate without soil thanks to peculiar anatomical and physiological characteristics present on the leaves and inside the plant, which allowed them to adapt in nature to the most disparate places and often to hostile climates and environments.
Of this genus there are many species of which we mention some of the most cultivated ones for ornamental use:
– Tillandsia capitata;
– Tillandsia albertiana;
– Tillandsia recurvifolia;
– Tillandsia ionantha;
– Tillandsia velutina;
– Tillandsia usneoides;
– Tillandsia brachycaulos multiflora;
– Tillandsia xerographica.
In this card we will see how to cultivate the Tillandsia, considering that in suitable environmental conditions it is a plant that if well cared for goes to flower when it reaches maturity. Once flowered, the inflorescences that occur in spikes or bunches, have a duration ranging from several days to a few months, depending on the species. These are often very bright in color, ranging from orange to fuchsia and with an intense aroma.
For the cultivation of these plants consider that in our climates they adapt perfectly inside the houses. These plants, even in composition, find easy and pleasant placement in any corner of the house simply by placing them on any support or container that enhances their shape.
They are plants that by their nature are extremely frugal. They adapt well to almost any environment as long as it is very bright, in most of our regions they can live outdoors almost all year round. For this reason, the Tillandsia, during the warm season, it is advisable to place them, possibly, outside, in a shaded area, slightly fixed on branches or trunks of plants, to which later they will cling with their root system.
The minimum limit temperature is 5-7 ° C which can only be tolerated for a few hours a day.
The peculiarity of these plants, as mentioned, is that, for those placed outside and unless they are in particularly dry areas, they manage to survive, as Tillandsia is able to effectively capture the humidity of the night and ‘rainwater and is able then to keep it for a long time.
For an optimal cultivation however, in the summer period, it is good to nebulize the leaves often with water at room temperature and possibly not calcareous (even twice a day) to which to add little fertilizer in soluble powder, low in nitrogen, with micro and macro elements to be dissolved before spraying.
These plants from the period of October to April slow down their vegetative cycle, but often at this stage they can also bloom.

In this period it is however necessary to thin out the nebulizations every 15 days, avoiding to wet the center of the rosettes.
Avoid fixing the plants on calcareous pebbles such as travertine that melting with the watering could lead to the formation of incrustations on the trichomes damaging them, preferring rather branches with cork bark, or strips of light wood like fir.
The plants must be fixed to the supports on which they must grow with strings, string or tuna thread, perhaps placing sphagnum between the base of the plant and the support, to facilitate the rooting of the plant. Avoid placing the plants in poorly ventilated areas, with persistent humidity, poorly lit, thus avoiding corridors and the kitchen (as the greasy vapors are extremely deleterious), while environments such as the bathroom and well lit are very suitable, better close to a window.
Remember that, in the most humid places, the Tillandsia will bloom only if exposed to the sun. In general, species with greener and more delicate leaves require less sun and more moisture and tend to thrive in a cool environment.
Those with the most rigid and gray leaves prefer more light and are usually from warmer areas. Many xeric species do not transpire and lose water as quickly as they would in a dry environment. The speed with which a plant will lose its internal water is a function of temperature and humidity.
Remember that during periods of low humidity, the sun’s rays can burn the leaves.
The tillandsia love areas with breezes, especially if they are raised in a humid environment.
Also with regard to the supply of humidity and water, moreover, the frequency with which these plants are wet and not how wet they are is fundamental.
Obviously the frequency changes between the most xeric species that cannot be wet too much except that they remain wet for only a couple of days.
However, always avoid wetting the part of the rosette and stagnating at the anchor points.
If the Tillandsias are kept at home for more than a month, special attention must be paid.
Although the Tillandsias have the ability to adapt to a wide range of climatic conditions, they will often grow (or at least not die) even inside. In any case, these plants, when raised at home must receive a lot of light from a nearby window (preferably facing east, west or south). If not feasible, broad-spectrum fluorescent lamps are available which provide 92% of sunlight when placed 15–30 cm from the plant.
A final curiosity concerns the purifying capacity of these plants.
The Tillandsia are in fact able to absorb and retain the polluting substances present in the atmosphere, such as formaldehyde present in all living and working environments, but also PM10, polluting molecules produced during the combustion processes that normally the others plants are not able to absorb.

One thought on “How to cultivate the Tillandsia”