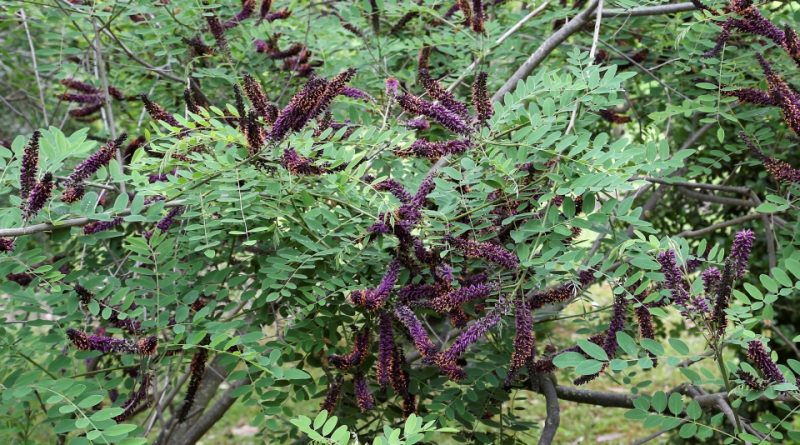 The false indigo or indigo bastard (Amorpha fruticosa L.) is a shrub species of the Fabaceae family.

Systematics –
From the systematic point of view it belongs to the Eukaryota Domain, United Plantae, Magnoliophyta Division, Magnoliopsida Class, Fabales Order, Fabaceae Family, Faboideae Subfamily, Amorpheae Tribe and then to the Genus Amorpha and to the Species A. fruticosa.

Etymology –
The term Amorpha comes from the Greek privative prefix α- a- without and from μορφή morphé form, appearance, grace, beauty: because the flowers have only one petal.
The specific epithet fruticosa because it is rich in buds, see frutice in the botanical dictionary.

Geographical Distribution and Habitat –
The bastard indigo is a deciduous shrub introduced from North America and today widespread in southern Europe where it grows on the shores and river beds, from sea level to about 600 m.
It is a very invasive species that even colonizes highway embankments and paths of industrial ducts. Being characterized by a high adaptive capacity and high competitiveness, it puts many native species at risk.
In Italy it is present in almost all regions of Italy, except in Sicily. 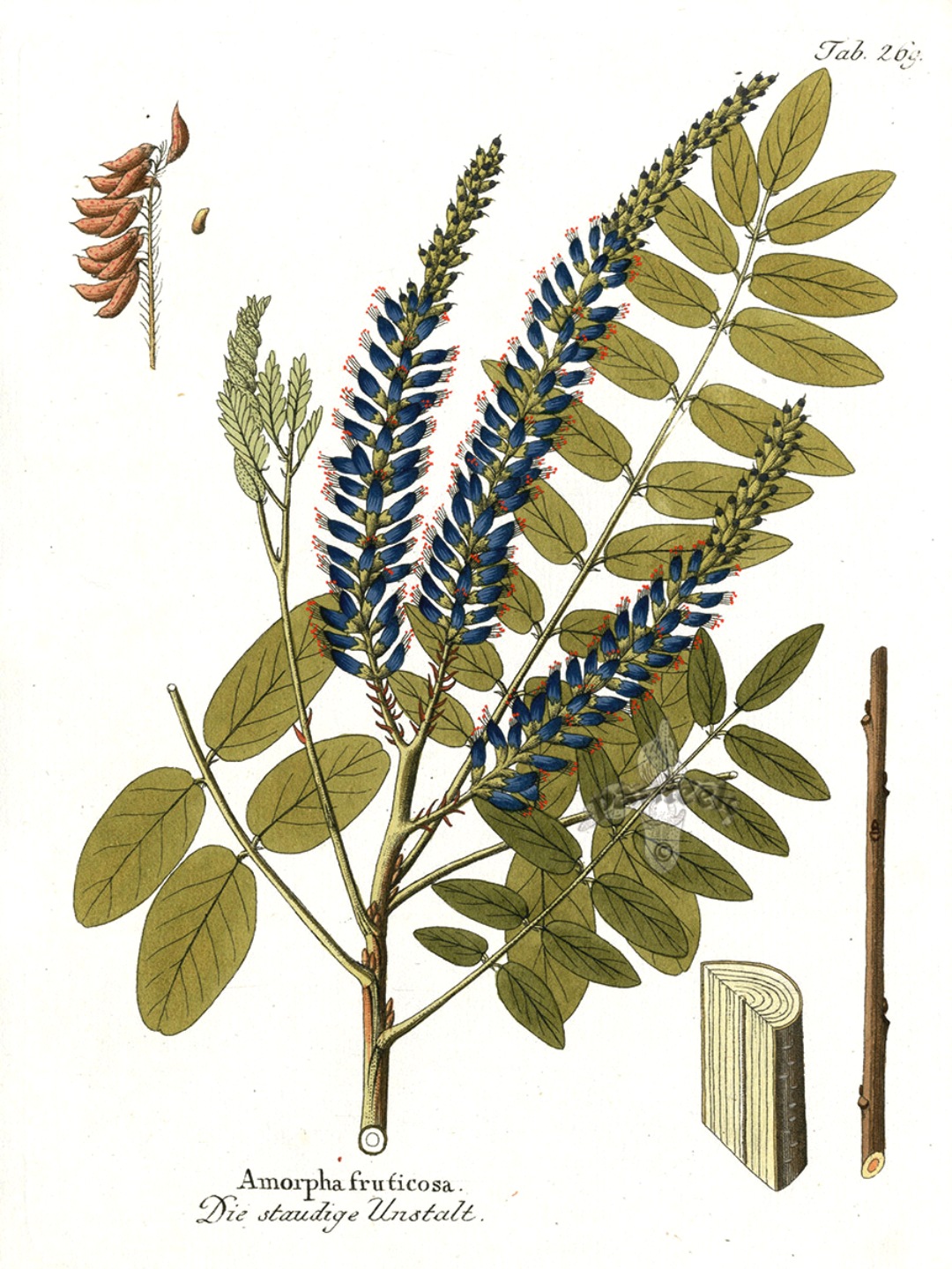 Description –
The Amorpha fruticosa is a shrub-like plant with an expanded crown, 1 to 5 m high and with supplementary buds below normal ones.
The stem is irregular, sinuous with branches scattered from the base and with young ones slightly pubescent and reddened; the bark is light brown or greyish, in the branches of the year previously slightly furrowed.
The leaves are deciduous, petiolate (2-3 cm), compound, imparipinnate with 11-25 elliptic leaflets and with linear stipules of 2 – 4 mm that fall early. The leaves resemble those of the locust tree, with which it is confused even if it has no thorns.
The flowers are hermaphrodite on irregular and unilateral racemes, placed on the leaf axil, of violet color and with short pedicels. The glass is bell-shaped of 4 – 5 mm with 5 indistinct teeth. The corolla is tubiform, reduced to a crumpled banner, 2 – 3 long the glass, with slightly protruding stamens and welded to the base.
The flowering period is between June and July.
The fruit is a 7 – 8 mm legume, indehiscent, containing 1-2 seeds, of an oblong-curved shape, covered by large glands.

Cultivation –
The false indigo is a plant that grows well in sunny places and bears the cold well; furthermore, from the soil point of view these plants have been shown to be able to adapt to any soil, even poor and stony; undoubtedly for a better development of the plant it is good to put it in a good rich and above all very well drained soil.
This plant from late spring to late summer produces long spikes consisting of numerous dark purple-red flowers, with showy golden yellow or orange anthers; at the end of summer the flowers take the fruits.
These plants tend to produce numerous basal shoots and therefore the bushes can become very large, colonizing all the space they have available; if you intend to keep the shrub in a restricted area it is good to periodically remove the suckers.
Amorpha fruticosa is a plant that develops best if placed in the ground, but can grow satisfactorily even if grown in pots. These plants, as mentioned, should be placed in a very sunny place; these shrubs can also bear partial shade, where, however, they receive direct sunlight for at least a few hours a day.
Even if they do not fear the cold it is advisable to place them in a sheltered place in the wind, so as to prevent the long spikes of flowers and fruits from being damaged. If the climate is particularly harsh it is good to cover the aerial part, or, if placed in a vase, shelter them in a sheltered place.
As for water requirements, the plants of Amorpha fruticosa can also withstand periods of drought but, from March to September, it is good to intensify watering and watering about once a week, to allow the plant a balanced development. During the winter period it is necessary to thin out watering sensitively. It is good, however, that water does not form at the base of the plant.
For fertilizer inputs at the beginning of spring, mature mature organic fertilizer must be planted at the foot of the plant, or a handful of slow release granular fertilizer spread around the trunk.
For the multiplication of this plant it is possible to proceed by seed, in spring, after having stratified the seeds in the refrigerator for at least a week; in autumn or late winter it is also possible to remove the basal suckers, which must be rooted in a mixture of peat and sand in equal parts, in a container or directly in the house; the young plants should be kept in a semi-shaded place for the first year, and they should be watered regularly.

Uses and Traditions –
The Indigo bastardo, also known by the names of: Amorfa cespugliosa or Falso indigo, was imported into Europe in 1724 as an ornamental and garden plant. It is a plant that has a large pollen capacity so much that it is numbered among the weeds because it colonizes the soils, frequently together with the Robinia pseudoacacia to which it tends to replace itself by making an imbalance in the native ecosystem.
Especially in the past it was also used as a dyeing plant because it contains a pigment that is colored in blue.
It is also a melliferous plant, visited by bees, which provides abundant pollen and a nectar from which an excellent honey is obtained.
The wood of the Amorpha fruticosa is very flexible and resistant and therefore it is used for the construction of small greenhouses to protect plants and vegetables from the rigors of the climate.
It contains a resinous substance from which the amorpha is extracted which is used as a stomachic and insecticide. The plant can be poisonous if grazed.

Preparation Mode –
The false indigo is a plant that can be used as a stomachic, that is as a natural or pharmaceutical product capable of stimulating digestion, favoring the appetite reflexively, even though it is a use that must be done under medical indications. It is a plant from which a very tasty honey can be produced.