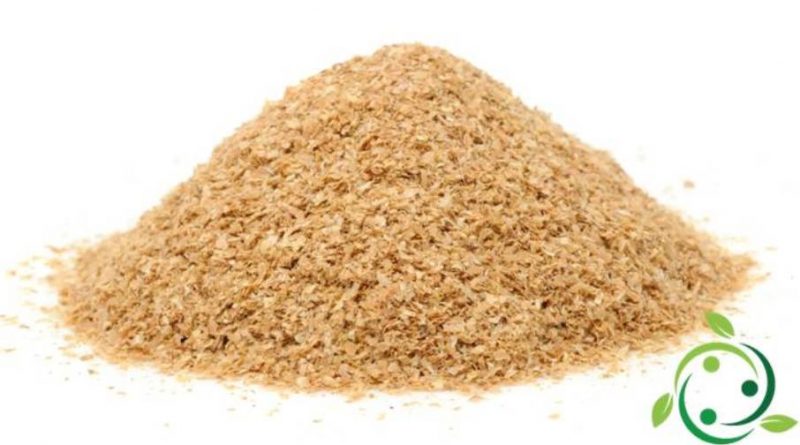 The term bran means a by-product of the grinding of kernels (seeds) of grasses, such as wheat, barley, rye, oats and other cereals, to obtain flour for human consumption. The bran is mainly composed of the pericarp or the part of the outer integument of the caryopsis.
The bran, after being separated from the flour, according to a process called refining, is presented in the form of flakes that are more or less wide and very distinct.
But we must not confuse the bran with the glumes or dress that in some types of caryopsis remain adherent to the beans even after threshing; some examples are represented by dressed barley and spelled.
A quantity of 100 grams of bran brings about 206 Kcal.
In addition, every 100 grams of this food have:
Water 8.2 g
Protids 14.1 g
Lipids 5.5 g
Cholesterol 0 g
Glucidi 26.6 g
Iron 12 g
550 mg magnesium
Thiamine 0.89 mg
Niacin 29.6 mg
Tocopherol 1.6 mg
The bran was once used almost exclusively for animal feed, in particular for cattle, horses and, to a lesser extent, for pigs. Cattle, as ruminants, are administered without problems in daily quantities up to over 1 kg, depending on the price; to the pigs, as omnivores, the doses administered are much smaller. Nowadays they are given moderately to reduce their natural fat (since lean meat is required).
In fact, until the early 1970s the bran was considered a waste product, to be mainly used for feeding livestock.
Since the 1970s, dietary fiber has increasingly attracted the interest of nutritionists, thanks to its ability to prevent many diseases typical of the welfare society (constipation, obesity, irritable bowel, colon cancer, etc.).

In case of constipation, wheat bran is preferable to other types, both in terms of quantity and quality. It is in fact richer in insoluble fibers, which give it the ability to swell, absorbing water up to 400% compared to its weight. In the case of diabetes, diverticulosis or hypercholesterolemia, food sources that are richer in soluble fiber are preferred.
Ultimately the bran facilitates intestinal transit: it performs a softening, massifying and homogenizing action of the stools, increasing the motility of the colon and reducing the pressure on the intestinal walls.
This property is particularly beneficial in the prevention of diverticulosis and colon cancer (the fiber facilitates the elimination of toxic residues introduced with food). Furthermore, the laxative effect is all the more pronounced the more the bran is rich in insoluble components.
Other advantages of bran include:
– fights hyperalimentation: swelling in the stomach causes an early sense of satiety, which prevents the ingestion of excessive amounts of food. The fiber has a limited caloric intake, practically zero if we consider the reduced intestinal absorption of the nutrients to which it is associated. Bran is therefore useful for combating overweight and obesity.
– modulates nutrient absorption: thanks to its ability to reduce the absorption of fat and cholesterol, bran is particularly important in the diet of those suffering from hypercholesterolemia or a high rate of triglycerides in the blood. Furthermore, by modulating the glycemic curve, it helps to avoid excessive increases in blood sugar and is therefore indicated in the prevention of senile diabetes.
The advantages of using bran include:
– since the supplements and the pharmaceutical preparations based on fibers are by now many, so much so that the old bran is often associated with other natural massaging agents of the feces, such as glucomannans, agar agar or karaja gum. Rather than using these products, it would be better to regularize your eating habits by increasing your intake of fruit and vegetables. It is clear that the simple addition of fiber supplements is not comparable to the benefits of a naturally rich diet of these substances.
– if the cereal from which the bran is extracted is not of biological origin, the risk of ingesting the synthetic chemical agents normally removed together with it is high.
– prolonged use of bran can also lead to a depletion of vitamins and minerals, interfering with the absorption of calcium, iron, phosphorus and zinc.
– Finally, individual tolerance to bran consumption should always be evaluated. Its use can in fact increase the production of intestinal gas, causing swelling and an annoying sense of relaxation. The bacterial degradation of its components can thus aggravate some forms of colitis or worsen irritable bowel syndrome and meteorism symptoms.