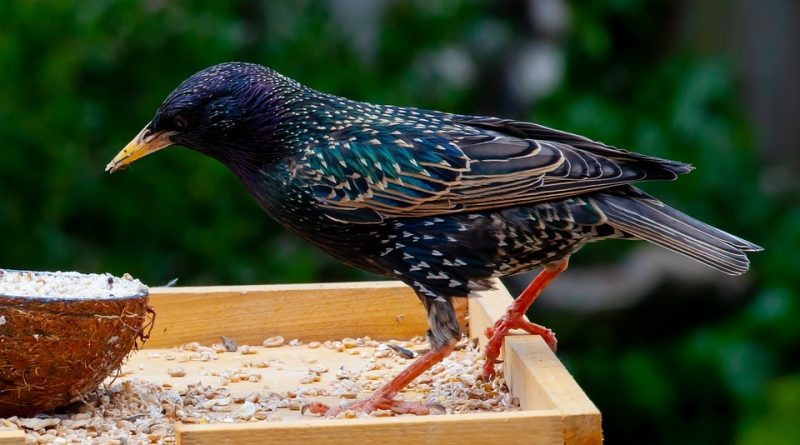 The Common Starling (Sturnus vulgaris Linnaeus, 1758) is a passerine bird belonging to the Sturnidae family.

Geographical Distribution and Habitat –
The Common Starling is native to Eurasia but introduced in all continents except in South America and Antarctica.
Its habitat is that of the countryside but adapts to live even in urban areas; it is one of the most adaptable species to different environments. It prefers the plains, the hills, the cultivated countryside and, in general, the agricultural environments, but it also frequents woodlands and wetlands. If in the past he used to spend the night in the reeds and in the woods, for some years he has shown a marked preference for urban and suburban areas, where he takes refuge in the evening along with hundreds of congeners, in a sort of “collective dormitories”.
In Italy the Storno is a bird both sedentary and migratory. In fact some populations arrive to winter in the regions of southern Italy, thanks also to the presence of a great availability of olives and other types of fruit, to then migrate in the northern regions to the first warm, other populations are settled. 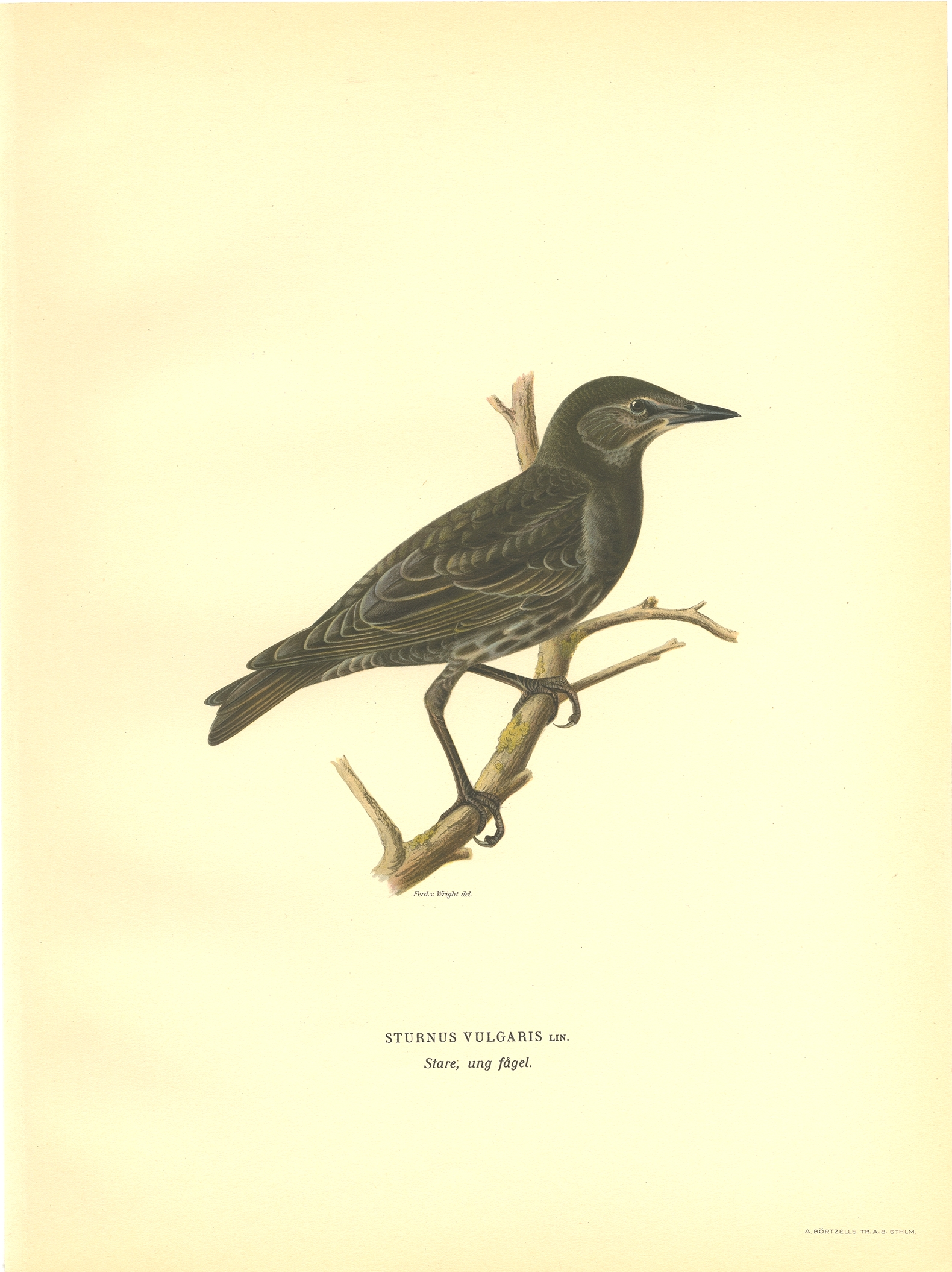 Description –
Sturnus vulgaris is a bird of about 20–23 cm, with a wingspan of about 35–40 cm and a weight of about 70–90 g.
It has a plumage that in summer becomes shiny black with purplish and green metallic reflections and the tips of white feathers; in winter the plumage becomes a less bright black color, with soft reflections and white tips that become more evident. The beak is sharp, with a yellowish color in the summer and brown in the winter.
The legs are reddish and the tail is short.
The two sexes differ in the presence of a spot on the basis of the beak which is blue in the males, reddish in the females.
The song of the common starling is a high-pitched melody, similar to a series of long whistles. The species manages to develop a powerful and variously modulated sound that, multiplied by the hundreds of individuals that make up the same group, can be very penetrating for the human ear. During the mating season the singing of this bird can be heard practically everywhere, in a repertoire of shrill verses that animate the countryside and the city.

Biology –
The common reversal can have up to three broods during the year.
The nest is built in the natural cavities of trees or rocks or artificial ones, such as roofs, gutters and cornices.
After mating the female lays 4 to 9 eggs, of blue color. The hatching is performed together with the male for a couple of weeks.
After about three weeks, the young starlings are born, leaving the nest as soon as they can fly.
A phenomenon that occurs in starling populations is that of intraspecific brood parasitism. With this activity the females optionally lay eggs in the nests kept by other females of the same species; it is an expedient that probably has the purpose of increasing the production of eggs and / or to preserve the progeny, in case of death of the parent.

Ecological Role –
Sturnus vulgaris feeds on insects that look for scratching in the ground, fruits like figs, medlars, cherries, and olives, seeds and sometimes small vertebrates. In any case, the Storno food regime adapts without difficulty to seasonal availability.
The starling, especially for its notable presence, is considered a harmful bird for the cultivation of fruit and olives and for sowing, where it can destroy entire crops. It has been included in the list of the 100 most invasive invasive species in the world.
Nevertheless, in Italy and in many European countries, the transfer is a protected bird. Moreover, recent studies have shown how the stool faeces, present in large quantities in urban centers (especially under the trees chosen as dormitories), can favor the spread of some mycetic, protozoan, viral, parasitic and bacterial diseases.
For these reasons, control plans are underway to limit the number of these birds especially in the vicinity of the cities.
It is a very gregarious bird that meets in flocks that can count several hundred individuals.
These birds, after having spent the whole day in the fields or in the parks in search of food, come in the evening and go in groups towards the “dormitories”, made up of reeds or groups of trees, where, before spending the night, they fight each other blatantly the best locations.
The flocks of these birds can be attacked by the peregrine falcon from which they defend themselves with extraordinary group evolutions that disorient the predator and curiously recall the defensive strategies of shoals of fish.
Cunning and adaptability are the characteristics that distinguish the common starling which is probably one of the most widespread passerines in the world. An opportunistic and skillful exploiter of resources, thanks to these qualities it has proliferated widely, so much to be pointed out by the farmers as responsible for important damage to crops, and by the inhabitants of the cities as a carrier of dirt. This is why in many cases cohabitation with man is conflicting. Sociable, Lo Storno loves life in the community: flocks in flight, composed also of thousands of individuals, are in fact a habitual vision both in the countryside, where the species moves to feed itself, and in the city, where it rests at night.