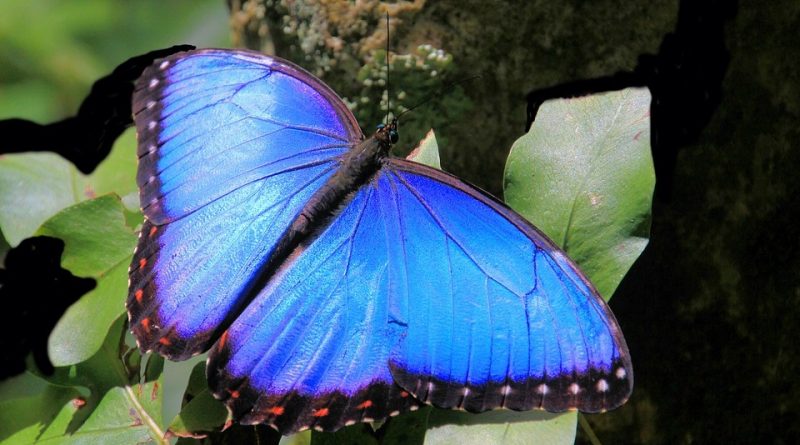 The blue morph (Morpho menelaus, (Linnaeus, 1758)) is a moth belonging to the Nymphalidae family.

Geographical Distribution and Habitat –
The blue morph is a widespread butterfly in Central and South America; this species is present in Mexico, Brazil, Costa Rica, Panama and Venezuela.
Their habitat is represented by sheltered areas of the forest and rarely found in open areas.

Morphology –
The blue morph is recognizable by its wings, about 14-15 cm wide, with a characteristic iridescent metallic blue color on the upper part; the upper wing is concave on the outer edge. The ventral part of the wings is brown with large circular ocelli arranged at the base of the post-discal zone.
Females, unlike males, have a wide black terminal band with white spots. Adult males have more vivid colors.
The larvae feed on plants during the night; they are red-brown with yellow-green or yellow spots. They are covered with bristles that release an irritating liquid on contact. The larvae are also strongly cannibal.

Attitude and biological cycle –
The females of Morpho menelaus lay their eggs, one by one, on the underside of the host plants. The eggs are very small, pale green and in the shape of dewdrops. The eggs are laid so that the caterpillars can feed themselves as soon as they hatch.
These feed on Erythroxylum, Dalbergia and Fabaceae and prefer young leaves as these are easier and more nutritious to eat.
The peak of these is in the dry season, a climate unsuitable for most animal communities. These caterpillars will enter into diapause or suspend development and can delay the formation of the pupa to survive this harsh period and lack of water.
Adults are more present at the beginning of the rainy season, when the climate and the humidity of the air make food resources abundant and oviposition is advantageous.
This butterfly spends 3-4 weeks at the adult stage and the entire life cycle is about 115 days. Adults fly mainly along the course of the rivers or wherever open land has been revealed.
The blue morph is a butterfly that recognizes itself, as well as for its showy livery, because it flies very quickly.

Ecological Role –
The adult butterfly feeds on rotten fruit, drinking the juice with the long spiritromba. The butterfly has tactile sensors on its legs and perceives the chemicals present in the air thanks to the antennas. It also feeds on the body fluids of dead animals and fungi; this makes it important for the dispersion of the fungus spores.
Due to its characteristic blue color, the Morpho menelaus is considered of great value among collectors and was widely hunted in the 20th century. However, deforestation is the main threat to the survival of this species.