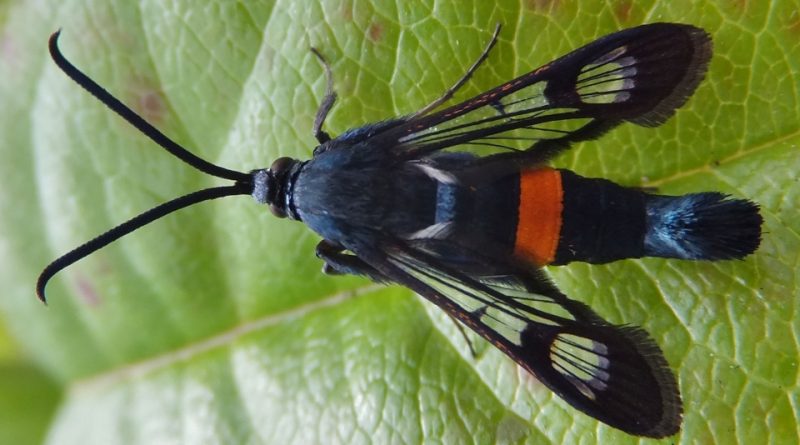 The apple clearwing moth (Synanthedon myopaeformis (Borkhausen, 1789)) is a moth belonging to the Sesiidae family.

Geographical Distribution and Habitat –
The apple clearwing moth is a moth that lives at the expense of apple, pear and other rosacea plants and can also be found in gardens, woods and hedges.
This insect is native to North Africa, Western Asia and Europe. In 2005, it was found in southwestern Canada, after which it also spread to the United States.

Morphology –
The adult of the Synanthedon myopaeformis has a wingspan of 20 – 28 mm, a thin and slender shape.
The chest and abdomen are dark blue-black, with a red transversal band on the 1st segment.
The wings are devoid of scales, with the front ones narrow, hyaline (very similar to those of the Hymenoptera), of a slightly smoky gray color on the edges and the rear ones much shorter, triangular, with a very apparent rib with black circles.
The larvae measure 15-25 mm, greyish white, with a dark head and thoracic plate.

Attitude and biological cycle –
The apple clearwing moth hibernates at the larval stage inside tunnels of the attacked plants.
Subsequently, from May to August, adults flicker, having completed one or two winters at the larval stage.
The females lay their eggs especially in the lesions of the trunk or branches and the eggs are made to adhere with their secretion on the woody organs.
The newly hatched larvae of late summer begin to dig tunnels, first superficial and progressively deeper and deeper, remaining, however, always in the subcortical area; the larvae overwinter in these galleries.
In the second year the larvae can flicker in the summer or continue the activity, at the larva stage, in the tunnels, to flicker the 3rd solar year, in this case completing a two-year cycle.
Therefore the cycle takes place in one year or two years depending on the environments; in northern Italy it is normally biennial.
The larvae are xylophagous but only attack suffering and already compromised plants; although they can also attack the grafting callus and the collar area. In any case the larvae dig superficial tunnels, which further weaken the plant, so the damage consists of desiccation and depressive decay.

Ecological Role –
The apple clearwing moth is a moth that completes its biological cycle on apple, pear and other rosacea plants where it can cause damage, in case of heavy infestations, especially in young grafted plants. This damage causes the vegetation to dry up and become progressively wasted; moreover, the wounds, caused in the excavation of the tunnels, represent an entry way for secondary pathogens, especially fungal agents of the Pomacee Cancer.
The damage caused, however, is rarely relevant also because the larvae cannot develop except in the presence of decaying trees in which the lymph circulation has decreased.
In the case of severe infestation the containment of this insect must be carried out with careful monitoring, from May to August, with sexual traps, to realize the actual population of the Synanthedon myopaeformis present in the environment.
Furthermore, it is necessary to evaluate the presence of its natural enemies among which we remember the Diptera Larvevorids, especially the Leskia aurea, whose larvae parasitize the larvae of this moth and the Hymenoptera Icneumonidae.
Another important parasitoid, in the containment of this moth, is Liotryphan crassi silk and the Nematodes, Steinernema sp. Which represent a significant threat to larvae; furthermore, the mortality of the larvae following exposure to the Beauveria bassiana and Metarhizium brunneum is significant.
Another threat to the larvae especially if exposed to Bacillus thuringiensis.
The agronomic measures are also important. In this sense it is necessary to use rootstocks with a smooth surface and without aerial roots; also avoid damaging the rootstock during processing or soil care activities.
We must also stimulate the presence, in addition to the aforementioned ones, of other natural antagonists, such as eg. insectivorous birds such as the woodpecker.
Unfortunately, currently, the fight against apple clearwing moth is almost exclusively chemical, which tends to make the biocenosis even more unbalanced in favor of this moth.
To date, in fact, the fight against Synanthedon myopaeformis is applied with guided pest control techniques, by monitoring the environment through sexual traps, in order to establish peaks of flicker that indicate periods of maximum oviposition.
These traps, as mentioned, must be installed in the orchard from the end of May with a density of one trap per hectare or two traps per farm. Obviously the determination of the intervention threshold is very variable and depends on:
– the type of orchard and its age;
– from the health status of the plants.
The intervention threshold, in the presence of young orchards or nursery plants, is also lowered to 20-30 weekly catches per trap per hectare. In other cases the treatments are carried out when the number of catches is deemed to be too high.
The treatments must be directed to the woody organs, avoiding leaving parts that are not sprayed.
If you intervene in the presence of attacks already in place, with larvae not yet entered in depth, it is advisable to carry out the treatments according to this scheme:
– autumn treatment by wetting the woody organs;
– repeated treatment in the following spring, with possible addition of white oil, wetting the woody organs.
Alternatively, the operation can be performed in the mid-June period after sampling the infestation with a threshold of 5-10 Sesia larvae per trunk.