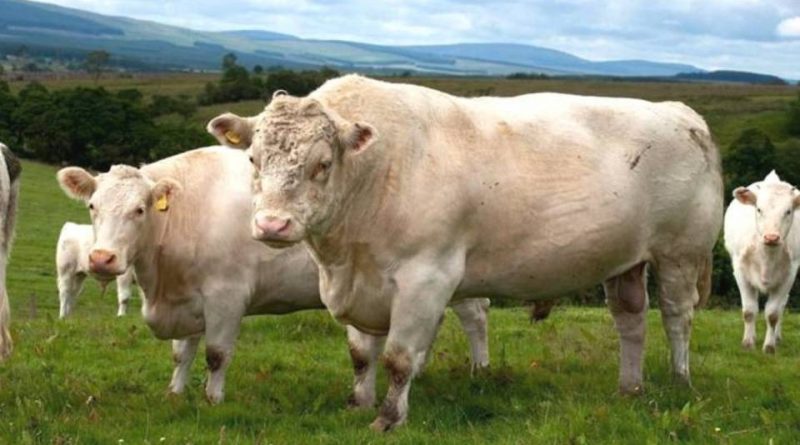 The Shorthorn Whitebred is a bovine breed (Bos taurus Linnaeus, 1758), native to north-western England and south-western Scotland, with a dual aptitude for the production of meat and milk but with prevalence for the former.

Geographical and area distribution –
Shorthorn Whitebred is a breed bred mainly in the border counties between England and Scotland and is completely separated from the more famous Shorthorn.

Origins and History –
The Whitebred Shorthorn is a breed whose exact origin is still unknown but can be identified, geographically, between the north-western England and the south-western Scotland and derived from the dual-purpose white Shorthorn cattle, locally known as Cumberland Shorthorn.
One of the first pioneers to give birth to this breed was Mr. David Hall, who sold blue-gray milk calves at Newcastleton’s auction in the 19th century.
However, the breed became known in the late nineteenth century when it was known as Cumberland White. The number of these white-mantled cattle, which were mainly cross-breeding bulls, increased after 1900. The Whitebred Shorthorn Association was formed on March 12, 1962 by the union of about 200 breeders.
The Whitebred Shorthorn is derived from the most famous and common Shorthorn but, unlike this, it has a white coat; furthermore it has not undergone the specialization of other Shorthorns, such as Beef Shorthorn and Dairy Shorthorn, and therefore maintains characteristics of greater rusticity and sturdiness.
The goal of breeding the Whitebred Shorthorn breed was to obtain white Shorthorn bulls to cross with black Galloway cows. The progeny of this cross gives rise to individuals of gray blue (Bluegreys), which bear the most interesting features of the parents and an intermediate blue roan color. Since this color does not reproduce in a coherent way the only way to obtain them is through this intersection. These F1 individuals, as mentioned, are very rustic and robust but, to obtain them, both breeds must be kept separately.
Unfortunately, with the introduction of cattle breeds from the continent, the number of Shorthorn Whitebred has decreased dramatically and is now a rare breed of cattle.

Morphology –
These cattle are medium-sized, with cows weighing around 550-600 kg and bulls around 800-900 kg.
The height at the withers fluctuates between 125 and 135 cm.
They have a white coat consisting of an outer layer of soft creamy white hair and a thick mossy undercoat.
Breed generally devoid of horns and with the depigmented muzzle, pink or light gray in color.
The head is of medium length with a good wide snout and bright eyes.
Both the feet and the limbs and claws are normally healthy and robust.

Production aptitude –
Whitebred Shorthorn is a dual-purpose breed with a prevalence of meat production.
Being robust animals they are very suitable for use and grazing in hill areas where their food is represented by a good biodiversity of herbaceous essences.
The cows are fertile, long-lasting, very maternal and able to produce healthy calves since birth.
They are also docile animals, easily manageable and able to resist and winter in most of the climatic and territorial conditions.
For this reason this breed is very suitable for breeding, in the wild, in the highlands between Scotland and England as it requires little in terms of supplementary feeding.
Among other things, thanks to their white color, they have the advantage of being easily identified even in dense and vegetated areas.