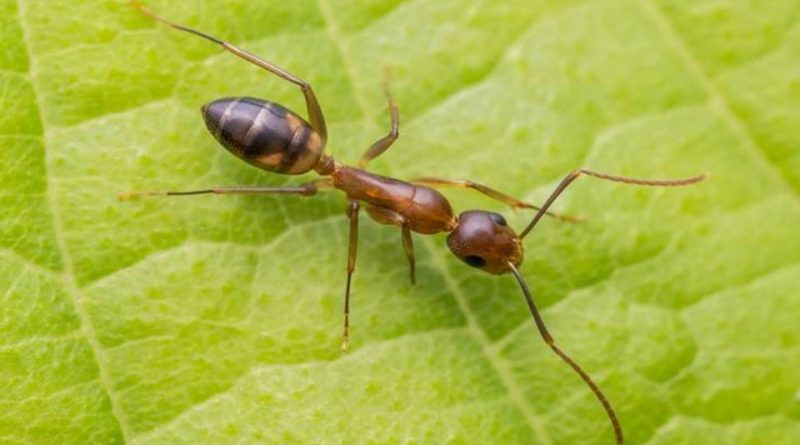 The Argentine ant (Linepithema humile Mayr, 1868) is a small hymenoptera of the family Formicidae.

Geographical Distribution and Habitat –
The Argentine ant is an insect native to South America and precisely from the Paraná basin (Argentina, Uruguay, Paraguay and southern Brazil). Its worldwide diffusion has been facilitated by human activities and today, especially since the twentieth century, it has spread to North America, southern Europe, Africa, Japan, Australia and New Zealand, causing serious problems to the plant communities and animals of the countries in which it took office.
It is present and widespread in Italy and its habitat is very varied, from wooded areas to cultivated areas, wherever it can destroy all kinds of edible substances, frequenting decomposing materials.
A commission of IUCN experts has included it in the list of the 100 most invasive invasive species in the world.

Morphology –
Linepithema humile is an ant between 2 and 3 mm long, with a head and abdomen whose color varies from dark yellow to brown.
The head is wider than the chest; the legs are proportionally very long, the antennas are composed of 12 articles, the petiole, which is the nodino located between the thorax and the abdomen or gastros, is simple (only one and not two) and is small.
The abdomen can bear a sting connected with a glandular structure that produces formic acid; when the sting is absent, this secretion is simply sprayed rather than inoculated. In sexed individuals wings are almost always present.
The chest is yellowish, while the legs and antennae are dark yellow.
The eggs are small and vary in color from white to yellowish.

Attitude and biological cycle –
The biological cycle of the Linepithema humile consists of four stages.
After spawning a larva develops which, through a complete metamorphosis, is transformed first into pupa and then into an adult insect.
The eggs are laid by the queen in very high numbers; consider that a colony can also contain millions of ants, all produced by a single queen.
From the eggs, in the span of 2-6 weeks, the larvae develop which, after having been fed for a variable period from a few weeks to several months, are transformed into pupae. During the pupa stage, the ant remains inactive, does not feed and undergoes a profound transformation into an adult insect.
The non-winged females, called workers, are generally sterile and have the task of caring for and nurturing the juvenile forms, as well as the defense of the community.
Males can sometimes be present in the anthill, but generally die after the nuptial flight and the copula that generally occurs with a showy swarming in the summer months. After mating the swarming ends: the queens lose their wings and start the foundation of the new colony.
It emits a typical smell of rancid fat when many are crushed, something that is not felt for a single ant.
The nests of the Argentine ant are polyginal, that is, they contain a large number of queens, and it is not difficult to see some of them running among the columns of the workers. When the number of ants in a nest is excessive the colony is divided by budding, a queen followed by a large number of workers moves away and goes to found a further nest, so the nests of nearby Linepithema do not fight each other, rather they collaborate, attack together and divide the prey. Often a large number of colonies move and attack together by fielding more than a million ants.

Ecological Role –
The “Argentine ant” is probably the most harmful and dangerous species due to its attacks on the food industries and all the environments where food is stored. For its prolificacy and aggressiveness it has almost replaced the other species of ants, especially in Europe, Australia, South Africa and California.
Like other ants it lives in colonies, in anthills. A colony is made up of one or more fertile females (queens) and many smaller sterile females (workers and soldiers). The workers take care of the total care of the anthill (food collection, cleaning, colony surveillance, egg care, feeding and breeding of larvae and pupae).
Ants defend themselves by biting or stinging, or by spraying formic acid, lethal to many small insects. The ability of ants to collaborate with each other is extraordinary.
From the food point of view they are generally omnivorous and are attracted to homes or structures where sugary substances are present, even though they do not neglect various kinds of food. At times of maximum egg production and development of the brood, the need for protein substances that the workers obtain from predation in the homes, in the food industries, on the farms, as well as from the aggression of other insects increases.
They also feed on aphids, with which they establish symbiotic relations, protecting and defending them, feeding on their sugary droppings, the so-called honeydew. Very interesting to note that the membership of a caste (females, males, workers) is determined by the food with which the larvae are fed by worker ants.
A low-protein diet will lead to the development of a worker, a rich diet will determine the development of a queen. Their nests, generally located in the ground, even at great depth, are extremely difficult to reach when it comes to planning a rational struggle. In fact, only sterile individuals emerge.
Linepithema humile, due to its prolificacy and aggressiveness, destroys all other ants and even termites. This ant from a particular gland emits irydomirmecin which in addition to being active against insects also has an antibiotic effect. The Argentine ant has a courageous, aggressive and obstinate character, so as to amaze even the most expert myrmecologists.
For their prolificacy and for the collaboration that is established between various colonies of the same species, Linepithema humile manages to eradicate the other ants, which has happened, now, in many countries.
There are some exceptions like in North Africa, where in the areas in which there are many colonies of Tapinoma Simrothi the Argentine ant cannot penetrate. Even when Tapinoma nigerrimum is strongly dominant, the Argentine ant does not penetrate unless the T. nigerrimums have been weakened by insecticide treatments.
The capacity of aggregation of the Linepithema humile is such that it can constitute maxicolonie of incredible dimensions. For example, according to some researchers, these ants form a single maxi colony from Liguria to Portugal, forming an enormous complex that constitutes the largest community of social living beings in the world, thousands of billions of ants potentially capable of acting together to achieve the same goal.