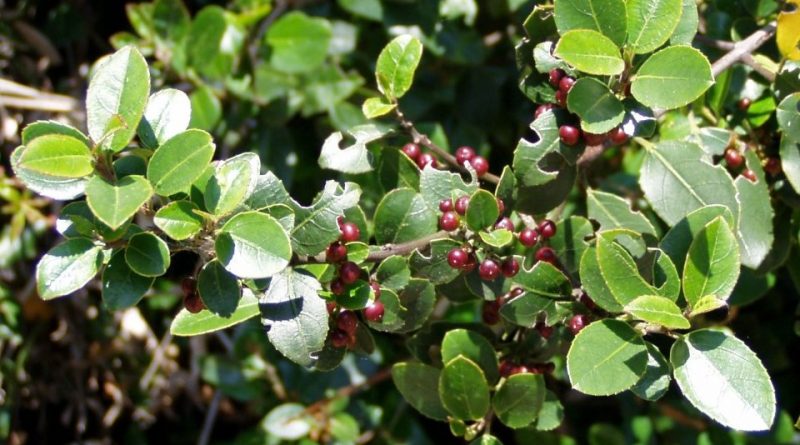 The Mediterranean buckthorn (Rhamnus alaternus L.) is a shrub of the Rhamnaceae family.

Systematics –
From the systematic point of view it belongs to the Eukaryota Domain, United Plantae, Magnoliophyta Division, Magnoliopsida Class, Rhamnales Order, Rhamnaceae Family and therefore to the Genus Rhamnus and to the R. alaternus Species.

Etymology –
The term Rhamnus comes from the Greek ῥάμνος rhámnos, name attributed to several shrubs by Theophrastus and other Greek authors.
The epithet alaternus comes from alaternus linterno, name of a shrub cited by Pliny and used by Linnaeus for the assonance with alternus alternata, reference to the arrangement of the leaves. According to other authors for the similarity with the blackthorn, called Alaternus from Clusius.

Geographical Distribution and Habitat –
The Mediterranean buckthorn is an evergreen shrub species typical of the Mediterranean maquis and of the garrigue of the regions with a Mediterranean climate that grows from sea level up to 700 m of altitude.
This plant is spread from Spain to the Crimea, to Asia Minor and to northern Africa where it also grows in arid, calcareous and stony soils. 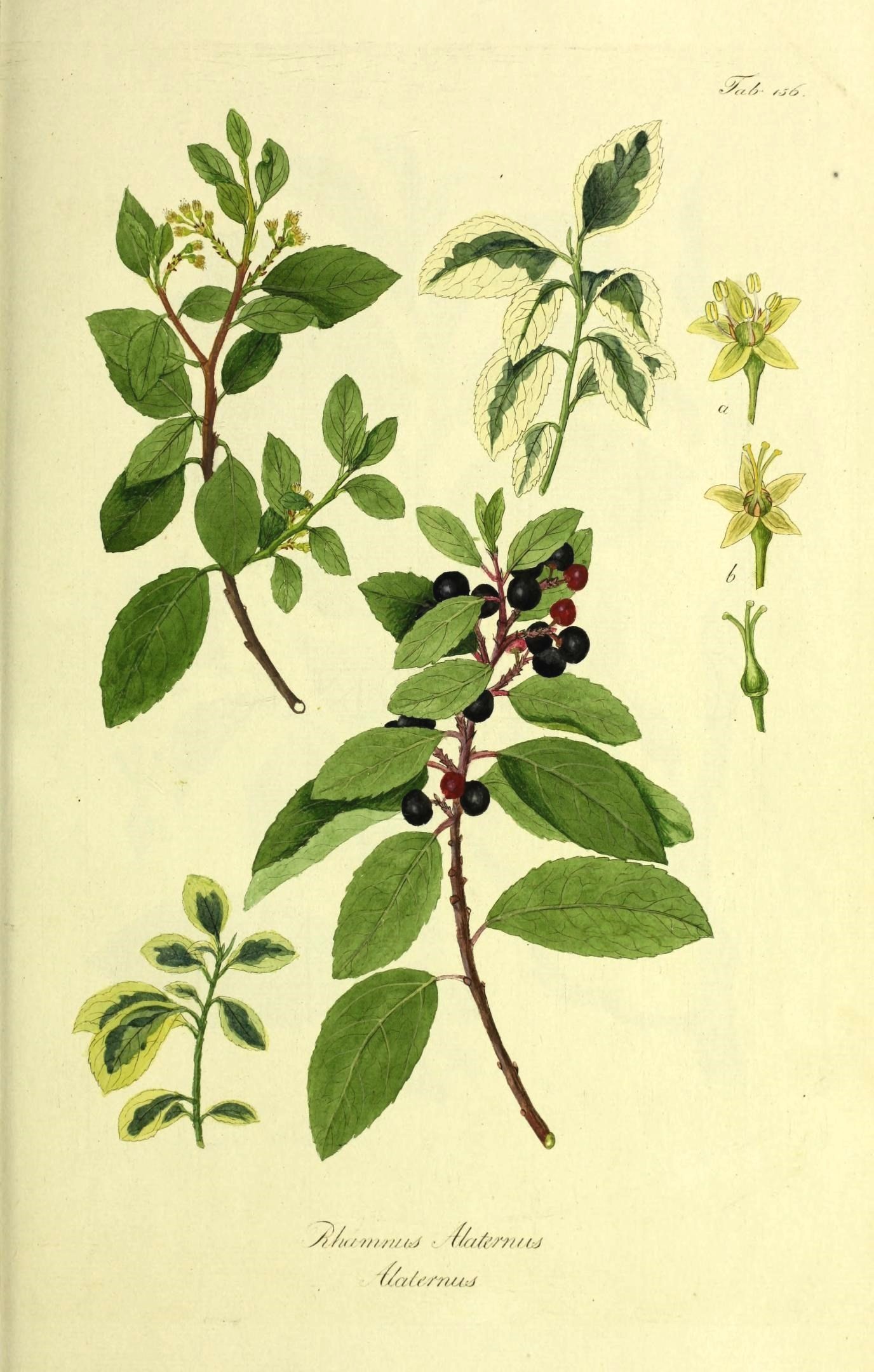 Description –
The Rhamnus alaternus is a shrub that can grow up to 5 m in height.
It has stems with reddish bark and pubescent young branches; the foliage is compact and round.
The leaves are alternate, of 2-5 cm, sometimes almost opposite, of oval or lanceolate shape, of leathery consistency, of a glossy green color on the upper side and green-yellowish in the lower one, with entire margin or slightly serrated whitish, with 4-6 pairs of ribs that run almost parallel to it towards the end of the margin.
The flowers are small gods and collected in a short axillary raceme of yellow-greenish color, with isolated or absent petals, styles cracked in 2-4 parts.
The anthesis is in the period between February and April.
The fruit, of 4-6 mm, is an obovoid drupe, of reddish-brown color, black at maturity which contains from 2 to 4 seeds.

Cultivation –
For the cultivation of the Mediterranean buckthorn one must take into account that it is a plant that prefers sunny and warm exposures, where it adapts to many types of soil but which grows frequently in the calcareous and stony ones. The plant is resistant to drought and salt spray carried by sea winds.
For the multiplication it is possible to start from seed, with sowing to be carried out from September to October or for woody cutting, in the period of late January or semi-woody in the summer period.
For pruning it is necessary to intervene in the spring period when the plant awakens from the vegetative rest; in this period the longer stems are pruned in order to favor the basal arrangement of the bushes and the emission of new lateral jets.
The cut branches give off an unpleasant smell and for this reason the alaterno is also called stink wood.
It is also suitable for growing in pots.

Uses and Traditions –
The Mediterranean buckthorn is a very similar plant and can be confused with the Phillyrea latifolia (L.), which usually bears opposite leaves, also called ilatro. Very similar is also the Rhamnus alpinus (L.), which is a shrub that presents alternate deciduous leaves, with a membranous lamina, and flowers with 4 petals and 4 sepals, it flowers in late spring.
The alaterno can be used, as an ornamental plant, to form dense windbreak hedges near the sea
In forestry it is used for reforestation in rocky and arid areas.
The wood of this plant is very hard, of a yellow-brownish color and with the characteristic unpleasant odor that it gives off as soon as it is cut (from which the vernacular name of Legno stink); this is used for turning or cabinetry work.
Fruits or berries, leaves and branches are used in the dye industry to extract yellow-green pigments and orange-yellow pigments, known as bladder green. In ancient times it was used to dye fabrics yellow.
The Mediterranean buckthorn also plays an important ecological role as its flowers are honey-colored and are exploited by bees for the production of a honey with a delicate taste.
The ripe fruits, harvested in August-September, dried in the sun, are used for their laxative and vermifuge properties.
The presence of triterpenes, flavonoids, gives this plant antihypertensive, antiarterosclerotic and antioxidant properties. Moreover, recent oncological studies would indicate that extracts enriched in flavonoids of Rhamnus alaternus roots and leaves inhibit the proliferation of atypical cells responsible for human leukemia.
Once upon a time, in folk medicine, the alaterno was used in liver diseases (liver and jaundice). In Sardinia, in ancient times, it was used to fight jaundice, or necklaces were prepared prepared with various parts of the plant or clothes imbued with infusions of the leaves, this because the plant was associated with the yellow color, and therefore effective in the cure of the evils that cause a yellowish coloring of the skin.
Still in Sardinia it was used to combat fatigue and heaviness in the feet by resorting to a footbath of Rhamnus alaternus.
In Campania an Mediterranean buckthorn is planted for each newborn that comes to light, following the enactment of the Regional Law n ° 14 of 28/12/1992 of the Campania Region, which has included this species in the list of tree species useful for reforestation.

Preparation Mode –
A use of the Mediterranean buckthorn is documented, in folk medicine of some Mediterranean countries, as galactagogue, laxative and hypotensive. The laxative effect is to be ascribed to the anthraquinone glycosides present in the fruits, and can become very powerful if the use is not accompanied by simultaneous intake of Altea and Mallow (due to the mucilages that mitigate their absorption effect).