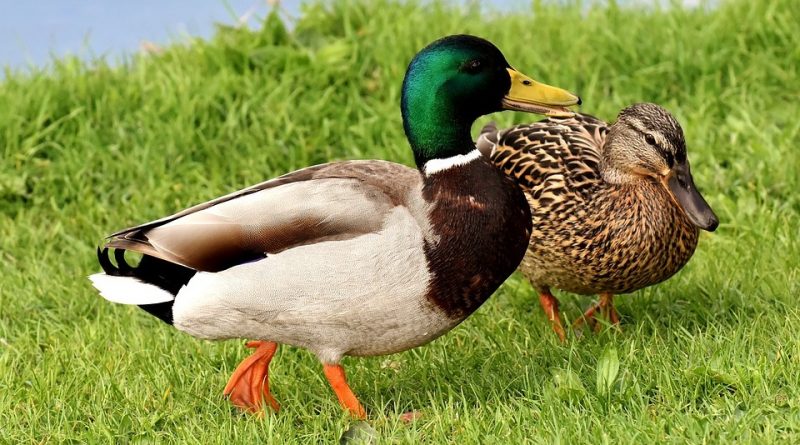 The Mallard (Anas platyrhynchos Linnaeus, 1758) is a bird belonging to the Anatidae family.

Geographical Distribution and Habitat –
Anas platyrhynchos is a bird that lives in wet areas where there is fresh water such as swamps, ponds, lakes and calm rivers, from sea level up to 2000 meters of altitude.
The species is widespread in all temperate and subtropical regions of North America, Europe, Asia, and some subspecies have also been introduced in New Zealand and Australia. 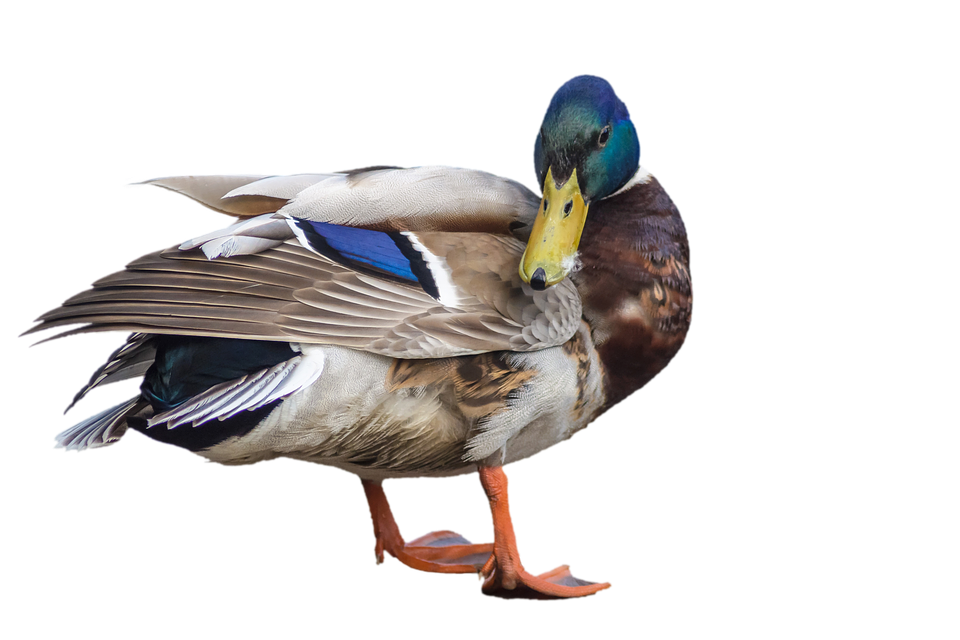 Description –
The mallard is a bird with high sexual dimorphism, so that males and females, which are very similar in shape, differ in the color of the plumage for most of the year. It is a bird with a robust body, short neck, broad and flat beak, slightly convex and with a very rounded tip; it also has medium-length legs that are grafted to the middle of the trunk, quite long wings and a roundish tail.
The male is about 56 cm long and the female about 52 cm. The wingspan varies between 91 and 98 cm and the weight between 710 and 1440 g.
Males make two molts of their feathers during the calendar year. The livery, during the nuptial period is easily recognizable, having the head and the upper part of the neck of an iridescent green color, a narrow white collar in the middle of the neck that separates the head, of green color, from the chest and from the upper part of the back which are of a purplish-brown color; the sides and the abdomen are silver-plated, the shoulders are gray-white, the upper part of the wing is gray, the lower part of the back is gray-black like the rump and the lower parts finely marbled with nericcio on a greyish-white background , the upper coverts are green-black and curl upwards, the lower ones black-velvet and the deep gray remiges at the base end with a blue-purplish winged mirror edged with white.
When the breeding season ends, in the summer, the male has the second moult. Thus the old flight feathers and helmsman, indispensable for flight, fall to be replaced by new feathers; even the showy mute wedding gown with a new eclipsed dark brown speckled plumage (quite similar to that of the female), which allows it to blend in better during this short period in which it is unable to fly and therefore lives sheltered among the reeds and tall grasses along the banks of the water courses being able to walk and swim only.
The eye is light brown, the beak yellow-green and the feet are bright orange.
Instead, the female always keeps camouflaging colors, with brown and dark brown spots, brown beak, dark brown eyebrow, beige throat.
The sides are different and have a lighter color of mottled brown beige; the helmsman’s feathers are beige, striped brown, the mirror is blue-purple bordered of white, the legs are dull orange but less alive than those of the male.
In addition, specimens may be present which due to a gene that regulates the coloring have variable colors with respect to this scheme.
The small ducklings are born without feathers and feathers and are covered with a soft two-colored duvet, with yellow chest and belly, brown back and sides with some yellow spots, yellow head with eyebrow and brown hair.

Biology –
The biological cycle of the mallard begins with courtship which begins in late October and continues until March.
The reproduction period goes from February to July – depending on the latitude – and the hatching of the eggs, whose number can vary from 5 to 15, lasts about 26-28 days. The nest is made in a rather rudimentary way, consisting of twigs and feathers that the female tears from a particular point of her own chest; the choice of location is not particularly demanding, either on bare ground or on hollow trees: these are usually dry sites in wet areas.
The number of eggs (which have dimensions of 5.9 × 4.1 cm) per brood can vary from 5 to 15 which only the female hatches for about 26-28 days. This is due to the characteristic plumage of the female that blends better in the middle of the vegetation.
At birth, the female takes care of the ducklings leading to the water level and teaches them to swim and feed until they are in the age of flying (about 7 weeks); these will reach sexual maturity after one year of life.
At the vocal level the male is recognized because he emits a calm yeeb, while during the period of courtship he emits a sort of fefev-fefev-fefev. The female, on the other hand, often uses a quaint here; if, while he is hatching, he is absent and is reached by males, he emits the characteristic verse que èh-èh-èh, which indicates that he is unavailable to mate. Also to defend the young from predators or intruders, he stirs flapping his wings and hurls himself at his opponent.

Ecological Role –
Anas platyrhynchos is a bird that spends most of the day on the water and goes to the mainland only for nesting or resting and can be considered the progenitor of all domestic duck breeds.
Pleasant in appearance, it has lost the image of a wild species over time, finding few admirers compared to the rarer and shy species, and becoming the most hunted duck species in all of Europe, and even bred for hunting purposes.
The boreal populations winter in the south, the northern European specimens overwinter in the central southern part of the continent, however some specimens do not migrate, and in some regions such as northern Italy they are non-migratory. This phenomenon seems to be on the rise, particularly in cities where mallards seem to find sufficient food. Another phenomenon to be evoked is genetic pollution (hybridization with domestic breeds), which would make the germans heavier and stouter therefore less sensitive to cold but also less suitable for migration.
At the world population level, the mallard is the most widespread of wild duck species and the most numerous (9 million individuals estimated in Western Europe). Females often spend more in the south than males, and only return later to nesting sites. Males are generally more numerous than females, also due to the high mortality recorded among the latter during incubation. In Italy the population is constantly increasing.
In Canada, where this duck was never observed before the beginning of the twentieth century, and rarely observed in the thirties and fifties, population estimates in the 2000s suggest a presence of over one million and increasing.