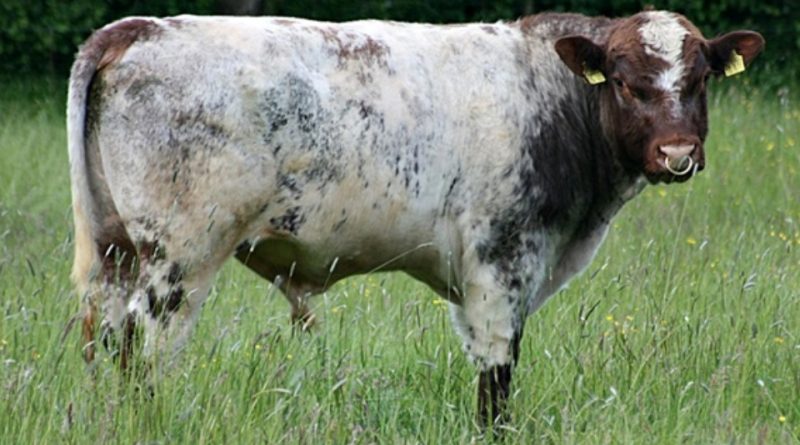 The Deutsches Shorthorn is a bovine breed (Bos taurus Linnaeus, 1758) and is the selected German stock of the homonymous English breed, with a dual aptitude for the production of meat and milk.

Geographical and area distribution –
The Deutsches Shorthorn is a breed of several hundred chiefs bred mainly in northern Germany and, like all local breeds, threatened by dangerous genetic erosion.

Origins and History –
The Deutsches Shorthorn is a breed originating from Germany and is the German stock of the homonymous breed of English origin. Their breeding is supported by the State of Schleswig-Holstein and in the peninsula of Eiderstedt which is the northernmost of the 16 federated states of Germany.
The Shorthorn is native to the north of England and was introduced in 1863 in the State of Schleswig-Holstein.
However, around 1750, the Shorthorn breed was bred in England by the Colling brothers. Already in 1822 the genealogical book of the breed was established, for which the Shorthorn is the race with the oldest genealogical book of all cattle. Since 1863 this breed of cattle is also found in Germany. It is considered the oldest German cattle breed.
The name of the breed derives from the short horns, slightly bent forward and blunted.
The consistency of the Deutsches Shorthorn was 12,000 animals registered in 1915, today much lower numbers are raised that fluctuate around 350, recorded in the herd book, and which have been decreasing in recent years; moreover, since 1994 a certain number of breeding animals from Canada have been introduced, which do not correspond to the old German Shorthorn, which is why it can be assumed that today there are no more than one hundred Deutsches Shorthorn.
Furthermore, since 2001, the goals of the farms have been changed, so it was decided to increase the weight of the animals raised by selection.

Morphology –
Within the Deutsches Shorthorn breed, animals of Red or Roan, white, red-white and red-white spotted (variable) are allowed.
These cattle can also be recognized for having a large, low body that resembles a box shape.
The head is short, the limbs regular, dry and with solid claws; a good musculature of the areas of the shoulder, back, loins and pelvis and especially on the limbs.
The horns are short, elliptical in section, facing sideways and downwards.
The muzzle is depigmented.
The dimensions are:
– 140-145 cm, at the withers, and weighing 1,100-1,200 kg for males;
– 130-135 cm, at the withers, and weighing 600 – 750 kg for females;

Production aptitude –
The Deutsches Shorthorn is a dual-purpose breed for the production of meat and milk, with a good daily increase in physical mass that can be around 1350 g.
They are animals that show an easy birth of live calves, higher than average milk yield; good intake of roughage; resistant to adverse weather conditions; calm temperament, early slaughtering, high yields and good quality meat.
The first age of birth is 27 months. As a disadvantage, an increase in fat mass could be mentioned, but their frugality completely compensates for this disadvantage. Due to their rustic characteristics, the addition of concentrated foods is therefore absolutely superfluous for the German Shorthorn breed.