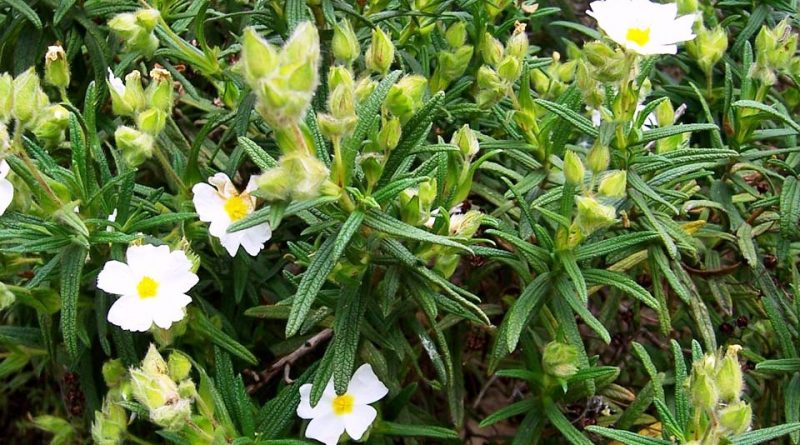 The Montpellier cistus (Cistus monspeliensis L., 1753) is a shrub species of the Cistaceae family.

Systematics –
From the systematic point of view it belongs to the Eukaryota Domain, Kingdom Plantae, Magnoliophyta Division, Magnoliopsida Class, Violales Order, Cistaceae Family and therefore to the Genus Cistus and to the C. monspeliensis Species.

Etymology –
The term Cistus comes from the Greek κίστη kíste small box (in Dioscorides) which describes the characteristic of the ripe fruit, a capsule that expels the seeds when it snaps open.
The specific epithet monspeliensis derives from the French city of Montpellier, of the Languedoc in southern France.

Geographical Distribution and Habitat –
Cistus monspeliensis is a typical species of bushy Mediterranean or shrub floristic associations, especially in sunny and arid areas. Its habitat is that of difficult pedological areas where it grows on sterile, coarse soils with low power of the low Mediterranean scrub, and sporadically in the garrigue, often near the coastal areas.
This species is typical of the cistus scrub, a monofloristic association or a large prevalence of cistus that often extends over vast surfaces and is an index of degradation of the Mediterranean vegetation.
It is often found to cover areas covered by fires as the seeds have the ability to withstand high temperatures, allowing the species to rapidly colonize the area. 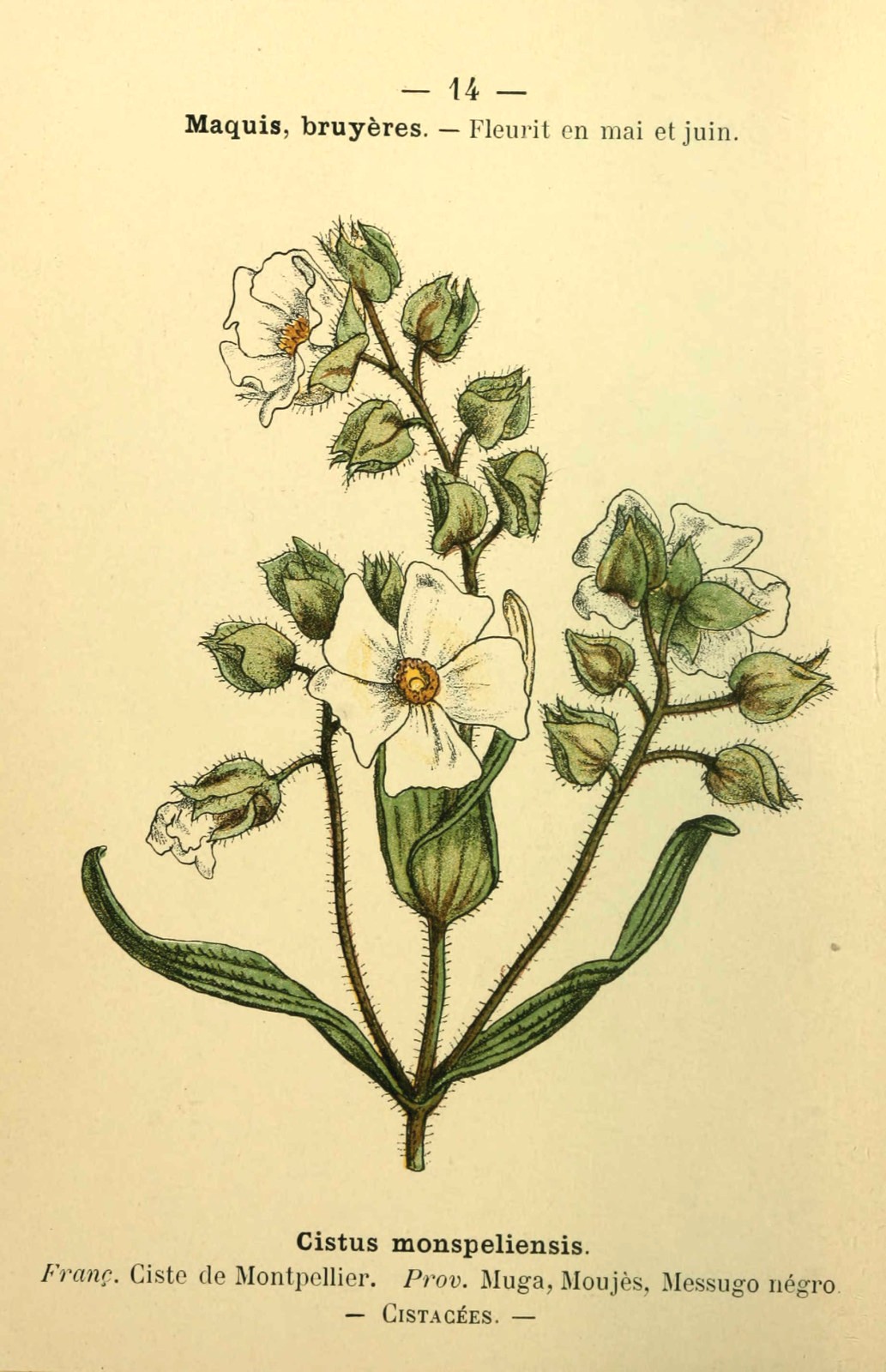 Description –
The Montpellier cistus recognizes to have a hairy stem with initially erect and then decombent and bushy habit, 30 to 120 cm tall and with brown bark.
The leaves are linear-lanceolate, sessile, with revolute margin, tomentose and viscous to the touch, which give off a strong and pleasant aromatic odor.
The flowers are gathered in small racemes and have radiated symmetry and a diameter of 1.5-2 cm. The chalice is formed by five free, unequal sepals, while the corolla is composed of 5 free petals, of white color and with a small yellow spot at the base of these. The androceo is characterized by the presence of numerous stamens with short filaments that are inserted on the receptacle.
The ovary is exceeded and is surmounted by a short stylus.
The anthesis is between March and May.
The fruit is an oval-shaped capsule (containing numerous angular seeds, of about 1.4 mm, blackish-brown, wrinkled and cross-linked) included in the accrescent, 5-lodge, globular, glabrous, bright and fragile, 4 mm calyx with loculid dehiscence for 5 valves.

Cultivation –
Cistus monspeliensis is a plant that adapts well to sterile and coarse soils but with well-drained soils.
He prefers exposure in full sun where it blooms since March. For ornamental purposes it can be used for rock gardens where to have a good result it must be planted with a density of 1 seedling per m2.
However, the marine cistus has an autumn-spring vegetative cycle, with intense vegetative activity in the spring, which culminates with flowering.
In natural conditions, in the summer period it enters vegetative rest due to the prohibitive drought conditions, resuming the activity only with the autumn rains. During the summer rest the habitus becomes typically xerophytic, losing much of the foliage. For this reason the cistus scrub has a gray-brown hue in the summer determined by the color of the bark.

Uses and Traditions –
The Montpellier cistus is a species present in Italy from Liguria to all regions of central and southern Italy except in the Marche and Umbria.
This plant grows both on calcareous substrates and on siliceous substrates in Mediterranean spots and garrigues, forming dense populations especially in areas subject to repeated fires.
From the Cistus monspeliensis (as well as from Cistus ladanifer and Cistus creticus) a resin called labdanum is extracted which is widely used in the perfume industry where it is mainly used as a fixative.
The marine cistus also plays an important ecological role as it is a colonizing plant of degraded hilly areas, as it represents one of the last bulwarks before desertification, preventing erosion of the sloping grounds crossed by fires. Domestic use, on the other hand, is limited to firewood, useful above all for starting the ignition. In fact, at one time the cyst bush was widely used in bundles as fuel for furnaces.
Like other highly aromatic plants, Cistus monspeliensis is rejected by animals.
Cistus monspelliensis L., like all white-flowered cysts, can be parasitized by Cytinus hypocistis (L.) L., a parasitic plant whose life cycle depends totally on its host (holoparasite or obligate parasite).

Preparation Mode –
The Montpellier cistus does not have particular uses of food type while its use, today, is limited to the use of its resin (ladano) as a fixative in perfumery.