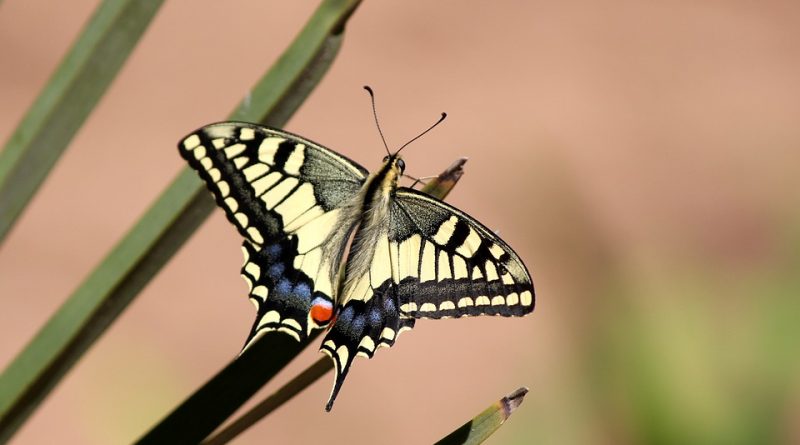 The swallowtail butterfly (Papilio machaon L. 1758) is a moth belonging to the Papilionidae family.

Geographical Distribution and Habitat –
Papilio machaon is a fairly common species that can be found throughout the Palearctic region in Europe and Asia as well as throughout North America and adapts to a wide variety of habitats, including the sub-arctic tundra of Canada, grasslands, arid forests and canyons in the southern United States; meadows, roadsides, river banks and subalpine pastures in Europe and semi-cultivated habitats in the Mediterranean area.
In temperate regions it is present, in addition to a wide variety of habitats, at every altitude, from grassy plains to mountain peaks over 3,000 m. Furthermore, some specimens have been observed in the Arctic and subarctic areas.
The ability to adapt also extends to the nursing plants, which vary in different continents; among these we remember: Ombrellifere (Apiacee) as Dacus carota, Phoeniculum vulgare (fennel) and Rutacee Ruta graveolens. 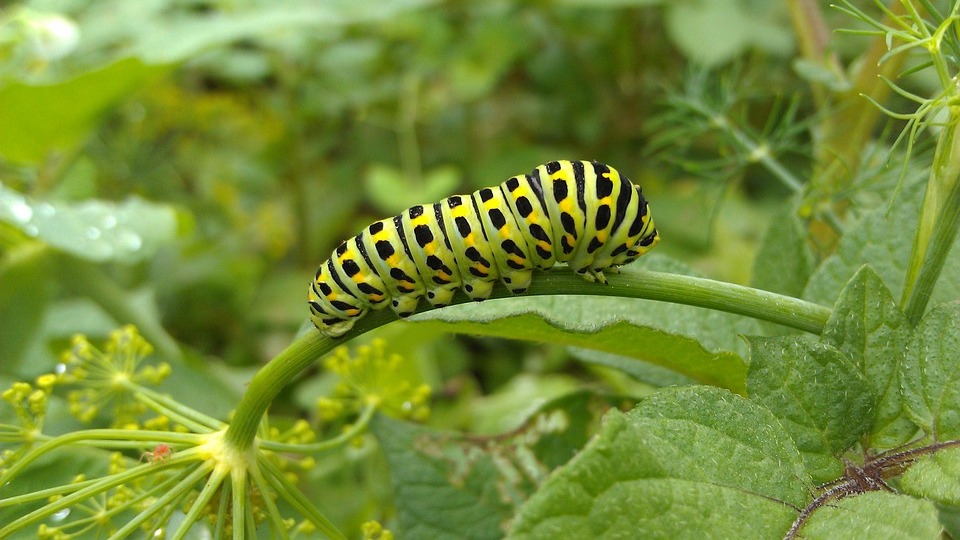 Morphology –
The swallowtail is a large butterfly, with a wingspan of 65-86 mm, with cream yellow wings with black veins and spots.
The hind wings of both sexes have a pair of protruding tails. In the anal area there is an evident red spot, surrounded by black and dusting of intense dark blue. The postdiscal region has a large black band, with dark blue, shaded and almost circular spots. The back of the wings takes the same design as the upper page with the more muted colors.
The caterpillar is green with black bands punctuated by yellow-orange spots, it has a particular extractable organ (osmeterium), used for defensive purposes. After 3 or 4 molts the caterpillar becomes mature, acquiring the aforementioned color and a maximum length of 6 cm, after which it forms a chrysalis.
The coloring of the caterpillar changes, as mentioned, to the inattentive eye a simple bird dejection. This type of mimicry is a particular strategy defined as cryptism, in which the individual assumes forms and colors of the environment or part of it. In this case the caterpillar does not hide but creates an illusion to the possible predator.
The eggs of this butterfly are generally laid on the nurse plant, are small and yellow-orange in color. With the progressive development of the larva, the eggs change color, assuming a black color just before the exit of the larva.

Attitude and biological cycle –
The biological cycle of this moth begins with the laying of eggs on the nursing plants on which the caterpillars feed; among these plants we have for example fennel and carrot, but not rarely also parsley or rue.
The macaone, like all butterflies, undergoes several metamorphoses to become adult: the eggs hatch in 8-10 days, leaving the larvae, also called “caterpillars”, which in about 6-7 weeks turn into pupae. This phase is the most variable and can last from 2 to 24 weeks.
In the days before the pupation, the caterpillar feeds abundantly and voraciously on the host plant producing a high quantity of dark green and spherical-shaped excrements. At one point the caterpillar stops feeding and, along with its excrement, expels a semi-transparent green liquid. This is the event that precedes the subsequent metamorphosis in chrysalis, a phase in which the caterpillar increases its motility with the aim of finding the most suitable point to pupate. Once found, the caterpillar binds to the support (eg branch, stem, but also inert surfaces) by weaving a silk lattice at the lower end of the body. Moreover, it weaves a sort of belt that allows it to support the upper part of the body to the support. At this point, within 24-48 hours, the caterpillar reduces its volume and carries out the last moult, transforming itself from a caterpillar into a chrysalis. The chrysalis can take on a color ranging from green to brown and then become progressively transparent, revealing the color of the butterfly’s wings.
After emerging from the pupa, the adult butterfly usually lives very little, about a couple of weeks, just long enough to reproduce and start a new cycle.
Flickering occurs in spring and summer, but depending on the latitude, adults were also observed in October belonging to a third generation.
Usually, the mating season falls between May and July. In the caterpillar phase, the macaone butterfly feeds first on the leaves of the host plant and then, when it grows, some flowers. As an adult, instead, it eats nectar, a characteristic that makes it an important pollinator insect.

Ecological Role –
Papilio machaon is a cosmopolitan butterfly that lives mainly on Umbelliferae (Apiacee) such as Dacus carota, Phoeniculum vulgare (fennel) and Rutacee Ruta graveolens. Once it has become an adult butterfly, it feeds on nectar from different flowers or from fermenting fruit, thus playing an important role as a pollinator insect.
These moths can be found mainly in the countryside or in the hills since the beginning of spring (a period in which the chrysalises flicker), until late autumn.
Particularly elegant and agile butterfly in flight; the male is also the defender of his own territory; if you happen to see two of them circling close together in daring stunts, one is probably trying to hunt the other.
Furthermore, if disturbed, they eject from the back of the head a pair of horn-shaped glands (osmeterium), which emit a repellent odor caused by butyric acid which keeps predators away.
Moreover, as for other lepidoptera, also the Macaone has the typical butterfly hilltopping behavior, that is it tries to fly above the highest point of the land where it is located (domain), where they compete for the attention of passing females.
If it is raised, it is one of the few friendly butterflies that willingly perch on their hand. Unfortunately in recent years due to atmospheric pollution and the reduction of spontaneous greenery, the presence of this beautiful specimen has been greatly reduced, but if only a fennel plant is placed on the balcony or in the garden, a laying site is created for the eggs. more, favoring the possible repopulation of the species.