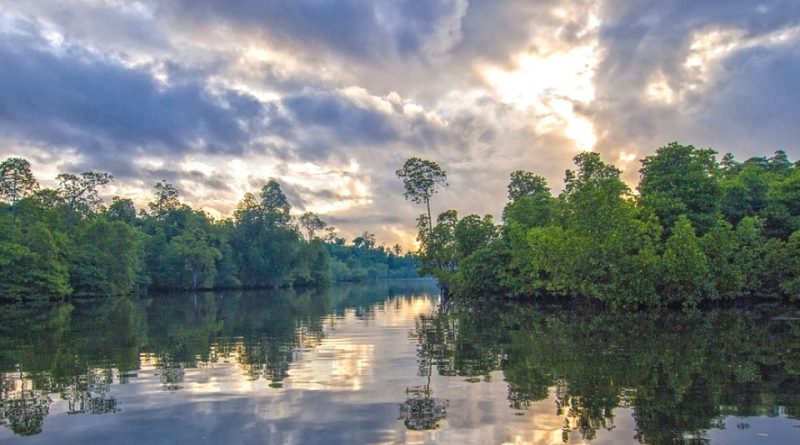 The term mangrove means a plant (or forest) formation consisting of many species of woody plants, which grow in tropical countries on the banks of brackish lagoons, on low and muddy beaches, permanently flooded or at high tide, and along the estuaries of the great rivers.
The mangroves constitute a dense vegetation, with singular characteristics, due to the large aerial and stilt roots, which branch before reaching the surface of the water, and of the pneumatophores, often brought to the extremity of root tips coming out from the water.
The WWF considers the mangrove as a biome, one of the fourteen major types of habitats into which the terrestrial globe is divided. The term mangrove is also often improperly used as the common name of some individual tree species representative of this plant formation.
The mangroves are generally made up of 9 families of Dicotyledons (Rizoforacee, Meliacee, Sonneratiacee, Verbenacee etc.). We can distinguish the western mangroves, composed of only 4 species, spread along the western coasts of Africa and the American coasts, and the eastern mangroves, extended from East Africa to Micronesia. The strong insolation to which the vegetative parts are exposed, first of all the leaves, and the soil pervaded by concentrated salt solutions, determine various xeromorphic structures. Several rhizophoraceas are viviparous: the seedling develops and the hypocotyl grows several decimeters, at the expense of the albumen, when the fruit is still attached to the plant. The disseminuli of many species are able to float and preserve the germination capacity for a long time, thus contributing to the vast dispersion of these plants. The mangrove vegetation represents a particular habitat that hosts numerous species of Mollusks, Crustaceans, Fishes, Reptiles etc., thanks to the abundance of nourishment and shelter sites.
The species that live in the mangroves are highly specialized in order to withstand and even use to their advantage the brackish water of the coastal or salt lagoons of the sea. The excess of salt is then eliminated by glands placed on the leaves that exude salt water. The shape is also adapted to be able to sprout in an environment often beaten by the waves and periodically flooded by the tidal cycle. The most luxuriant forms are found in the areas affected by fresh water currents that flow by infiltration or percolation into the sea (marshes or coastal marshes), or directly to the estuaries of the rivers. A further challenging factor for plants is the poor oxygenation of the soil, which is also almost always unstable.

In addition, mangroves are normally made up of four bands parallel to the coastline: the first is formed by almost perennially submerged plants, the second (the mangrove par excellence, mainly formed by species of the genus Rhizophora) is regularly invaded by the high tide, the third is formed by shrub formations and is submerged only by the higher high tides, and finally the fourth, formed by shrub and arboreal species, which is never submerged and has a soil with a lower salt content. Not always, however, the last two bands are present.
Furthermore, the morphological characteristic that distinguishes mangroves, namely the presence of “ancillary roots” that raise the trunk from the mud, is found only in the second and rarely in the third band. It is estimated that in the world mangroves cover an area of ​​approximately 150,000 km², of which most are located in Asia.
In a mangrove formation the reproduction can be via agamic, but mainly it is by sexual means.
The mangrove biotope has also developed different types of animals (from insects, amphibians, reptiles and birds) that have adapted and specialized for this exclusive environment, which offers undoubted advantages for them.
From an ecological point of view mangrove forests are threatened by deforestation, they are important kindergartens for the young of coral reef fish.
According to a study conducted in Belize and Mexico, mangrove forests play the important role of “nannies”. They would help young fish to protect themselves from predators during the time they are still young. The mangrove forests are in fact an important temporary stage for fish that from the habitat of birth pass to that of an adult, namely that of coral; if there were no mangroves, the fish would migrate to the barriers before completing their growth, making them more vulnerable to prey.
Researchers from the University of Exter, in the United Kingdom, have monitored more than 100 thousand specimens, from 64 different species, of different coral reefs: both those adjacent to mangrove forests and distant ones. The results showed a greater abundance of specimens and species precisely where coral reefs and mangroves appeared side by side. The results of the research therefore underline the importance of the conservation of mangrove forests, currently destroyed at a faster rate than the tropical rain forests.