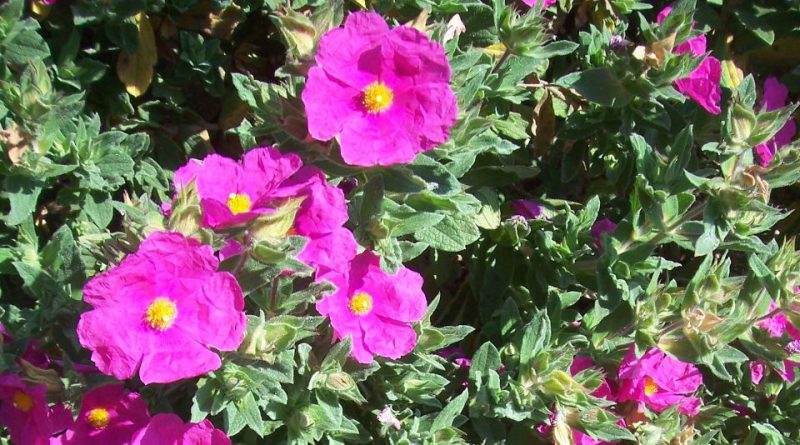 Systematics –
From the systematic point of view it belongs to the Eukaryota Domain, United Plantae, Magnoliophyta Division, Magnoliopsida Class, Violales Order, Cistaceae Family and therefore to the Genus Cistus and to the C. × incanus Species.
The terms are synonymous: Cistus creticus subsp. eriocephalus (Viv.) Greuter & Burdet, Cistus garganicus Ten., Cistus villosus Auct. an L. and Cistus eriocephalus Viv ..
This entity which was described by Linnaeus as Cistus incanus in fact, following recent studies, has been shown to be a natural hybrid between Cistus albidus and Cistus crispus.

Etymology –
The term Cistus comes from the Greek κίστη kíste give (in Dioscorides): it describes the characteristic of the ripe fruit, a capsule which expels the seeds when it opens. the specific epithet incanus derives from: that it is hoary, white, due to the presence of thick white hairs.

Geographical Distribution and Habitat –
Cysta villus is a typical species of the Mediterranean and grows in the Lauretum as a plant of the undergrowth in the Mediterranean scrub or as a floristic component of degraded spots and garrigues.
This plant is present in Italy on the islands, in Liguria and throughout the peninsula as far as Emilia-Romagna in the coastal area and on the Romagna hills. It is also present in isolated stations on the Veneto coast. 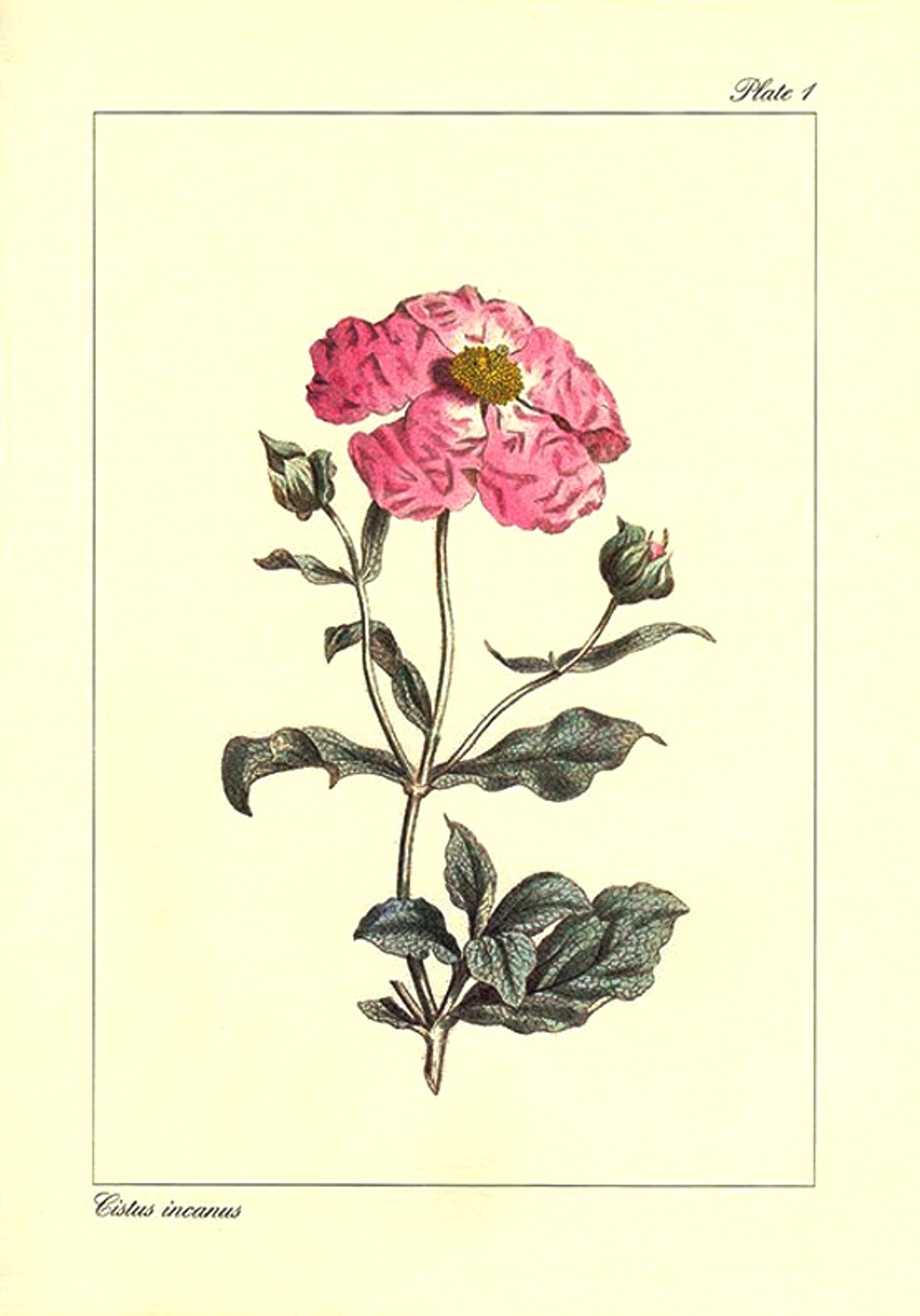 Description –
Cistus incanus is a woolly-tomentose shrub with a bushy, densely branched, modest size that does not reach one meter in height.
It has leaves with a rough, oval surface and covered by a thick tomentosity, with a lamina between 2 and 4 cm long.
The flowers are large and showy, 4-6 cm in diameter with pink or purple red and yellow petals at the base; these are gathered in terminal groups of a few units at the axilla of bractiform leaves.
It blooms between May and June and after the flowering on the plant appear brick-red hairy capsules that preserve numerous dark-colored seeds.
The fruit is indeed a 7-10 mm capsule, ovate, covered with simple hairs, dehiscent with 5 valves. The seeds are 1-1.2 mm, polyhedral, of a straw-brown color.

Cultivation –
Cistus incanus is cultivated by choosing sunny exposures, typical of Mediterranean environments and sheltered from the winds, preferring warm and sun-exposed areas in southern Europe.
The soil can be of any type even if it prefers the loose one, poor in calcium, moist and well drained; in nature it usually grows on earth rich in magnesium,
Irrigations must be constant and regular if cultivated in pots. The species bred in the open ground are content with the rainwater and also withstand periods of prolonged drought. Water only needs to be watered occasionally when the soil is completely dry. for fertilizing it can be provided with replanted manure.
The cistus propagates by seed, by cuttings and sometimes by layering.
Sowing takes place at the end of winter in large boxes or directly in the middle of the spring.
The semi-woody cuttings are harvested between May and June and are rooted in a compound of peat and sand.
After rooting, the new plants are then raised in individual containers until the size reached is adequate for transplanting.
The cistus must be transplanted directly with the earthen bread in which it developed, digging double holes the size of the pot.
The cistus does not like pruning and therefore it is advisable to eliminate dry branches and those damaged by the cold.
At the end of flowering it is possible to carry out a slight topping to favor the emission of new basal jets.

Uses and Traditions –
The cistus is a typical species that is an expression of the Mediterranean maquis.
According to legend, in ancient Greece during a council of the gods on Mount Olympus, it was decided that the cistus was ideal to heal the wounds of warriors in battle.
But the complete disapproval of the goddesses that they thought was ideal for aesthetic treatments, led to being attributed to the cistus both curative and cosmetic properties.
In the past the cistus was confused with the ivy by the expert Pliny the Elder, who took an incredible blunder. Very probably the names in the Greek texts were confused, since the cistus (kisthos) and the ivy (kissos) had very similar Greek names.
A gross mistake that many experts, including the doctor Pietro Mattioli, who lived around 1500, consider it rather curious, but without discussing the value in the medical field of Pliny the Elder.
The history of this plant begins already in the fourth century before Christ. Also in Genesis we refer to this Mediterranean plant as a kind of panacea. A tradition that has been maintained over time, if it is true that even today it is used in the Greek islands to serve Cisto Tea as an energizing drink for breakfast. It has been much appreciated as tea also in the countries of North Africa, as well as in the Mediterranean countries.
At that time there was a lot of resin from the cistus of clay.
The laudanum obtained from the resin, is known for its antiseptic effect able to counter bacterial infections, and is used in cosmetics for impure or inflamed skin while for internal use it was already used in antiquity in situations of phlegm and diarrhea.
In the past, gummy cistus resin has always been used in folk medicine as a flavoring in the cosmetic environment. Even today, this plant is used as a fixative and a component for making perfumes, but the properties of this particular plant are many.
Cistus incanus is one of the best known plants for its content of polyphenols.
Miricetin, quercetin, kaempferol are some of these powerful substances, which have proven to be able to exert a beneficial action on the respiratory system.
The immense multiplicity of phenols makes it so valuable to the human body. The research focused on the antioxidant effect of the plant’s secondary substances. They neutralize free radicals and help their own immune forces; and this is the best way to prevent diseases.
The anti-inflammatory action is supported by an antioxidant and immune modulating function: it modulates the growth of white blood cells and the release of cytokines during the inflammatory state. The cistus extract also has a remarkable antimicrobial action, especially against infections affecting the skin, induced by yeasts, such as Candida albicans. The mechanism of action is a non-specific inhibition directed against a huge number of pathogens, which also seems to be confirmed in the most recent recent clinical studies.
In areas of the Mediterranean, in the Middle East and in North Africa, the cistus is in fact also used as a natural remedy for episodes of diarrhea, fever, ulcer and as an anti-inflammatory.
The properties of Cistus incanus make it an excellent ingredient for creating anti-age formulations and preparations for impure or inflamed skin. It would also be able to modulate the body’s response to external aggression, helping to mitigate the intensity, severity and average duration of discomfort, particularly with respect to those of the respiratory system, even in situations of viral or bacterial infection.
It does not present particular contraindications, but should not be abused for the use of infusions and herbal teas. It could cause nausea and possible allergies.
Its use for pregnant women must be evaluated by a doctor.

Preparation Mode –
Cistus Incanus can be used as a hot drink or even used to prepare a concentrated decoction to be applied to the skin, for example in the event of impurities.