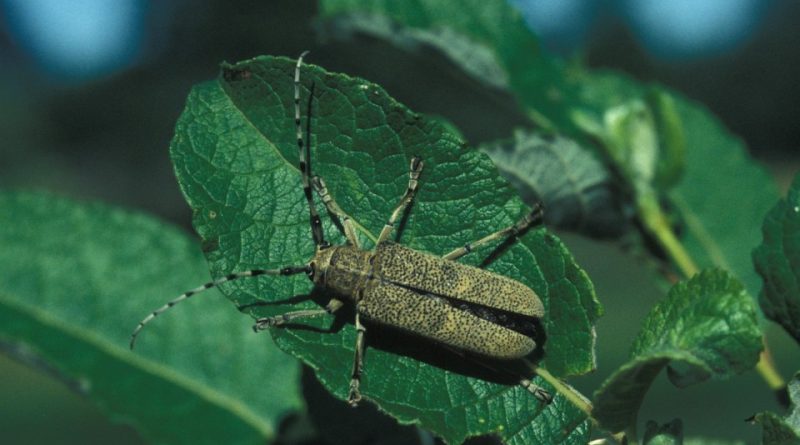 Geographical Distribution and Habitat –
The Saperda del Poplar is an insect with a wide spread that extends throughout Europe, up to the Caucasus and Western Siberia. In Italy it is quite widespread. This phytophagous is quite specific of the genus Populus spp., Above all in the riparian habitats, where many poplar species grow, but also of Willow and Birch.
It also spreads in plantations of artificial poplars, mainly in older ones, where the size of trees makes effective control difficult and competition between trees reduces their capacity for self-defense.

Morphology –
The Saperda carcharias is a lignicolous phytophagous whose adults measure from 22 to 30 mm of length, of elongated shape, of gray-ocher color, due to the presence of a dense and compact tomentosity that covers the elytra, the thorax and the other parts of the body.
The background color of the body is blackish-brown.
A thick blackish punctuation appears on the elytra and chest.
Adults, especially males, have long antennae, arched towards the back of the body.
The larvae measure about 30-40 mm, and even beyond, in length and are whitish in color, with yellowish shades; as they approach maturity they have reddish-brownish hair, scattered around the body.

Attitude and biological cycle –
Saperda carcharias is a fairly common lignicolous phytophagus in Italy, somewhat specific to the poplar on which it often causes serious damage to the stem and the main branches, due to the tunnels excavated by the xylophagous larvae.
The greatest damage is caused by the larval stages that dig numerous tunnels in the woody organs (stems and branches) that are evident due to the presence of external holes that are full of rosure and from which percolate a thick, brownish-black liquid.
The affected wood loses mechanical strength, which can also be followed by the breaking of branches and small stems; the plants, even if adult, undergo an inevitable stress, more or less intense depending on the attack that is manifested by a general deterioration that makes them more susceptible to parasitic attacks such as Caries and Cancers that find in the galleries an ideal place for entry.
Even the adults are defoliators who also feed on the young peel; however, they do not cause significant damage and certainly much less serious damage caused by larvae.
This insect hibernates at the larva stage inside the wood of the host plants; alternatively in the first year it can overwinter as an egg, under the rind in particular wells dug by the females with the jaws.
The exit period for adults is from June to September.
In this way during the first year the insect can overwinter in a different way as the early ovipositions give rise to larvae already in the first year that will overwinter, while the late ovipositions will give rise to the larvae only in the second year, in spring and in this case they will ewe the eggs.
The females adultee following the mating lay the eggs in a well, dug with the jaws, in the subscorza or directly in the crevices of the bark; the oviposition usually takes place both on the stem and on the large branches. In young plants the ovipositions are concentrated at their feet.
The eggs thus laid can overwinter or in the first year originate the larvae that begin their trophic activity in the cortical area. In the spring of the second year these larvae, which in the meantime wintered, resume their activity by digging deep and open tunnels to the outside; their presence is detectable because the hole comes out pink and thick liquid.
This activity is maintained throughout the second year; at the end the larvae will overwinter to give rise to the adults in the spring of the third solar year; in some cases the cycle can be extended also in the following year (4th calendar year and 3rd effective year).
In this way, also according to the climatic trends, the Saperda carcharias makes one generation every 2-3 years.

Ecological Role –
Saperda del poplar is therefore a specific lignicolous phytophagous of the Poplar which often causes serious damage to the stem and branches but which, as mentioned, may also affect Willows and Birches, with a period of damage ranging from May to half of October.
The symptoms are detectable through slight swellings following oviposition and then the appearance of blackish dejections that are noticed immediately after the larvae are hatched, manifestations that subsequently vary from pale yellow to dark orange following the rejection of the filaments of ingested wood . Often these manifestations are accompanied by gummy exudates.
Following the activity of the insect, the tunnels that run through the wood and the colors that it assumes, due to various degradation processes, severely depreciate the product, preventing it from being used for the most valuable processes.
The measures to be taken for the rehabilitation of the poplars do not provide for their defense in the first year of the shift, since any eggs laid in the nursery die with the burial of the base of the stem at the plant. Subsequently it is good, however, to apply agronomic practices that favor vigorous plant growth because this leads to very high mortality between the eggs and the young larvae of the insect.
Among the agronomic practices it is also necessary to provide for the elimination of plants seriously affected or compromised; moreover, it is good practice not to leave pruning residues, especially if they are large cuts, to avoid having a potential colonization substrate.
The interventions with insecticides must be done, against the newborn larvae, before they penetrate into the woody cylinder, then towards the end of May and not later than mid-June. The products that can be used are the same as those indicated for the Awl and the distribution must be done by spraying the base of the shaft. When the larvae have already penetrated the wood, it is necessary to protect the basal 5-6 meters of the trunk by intervening tunnel by tunnel with special “spray” formulations or with brush-strokes that use the same active ingredients at high concentration.