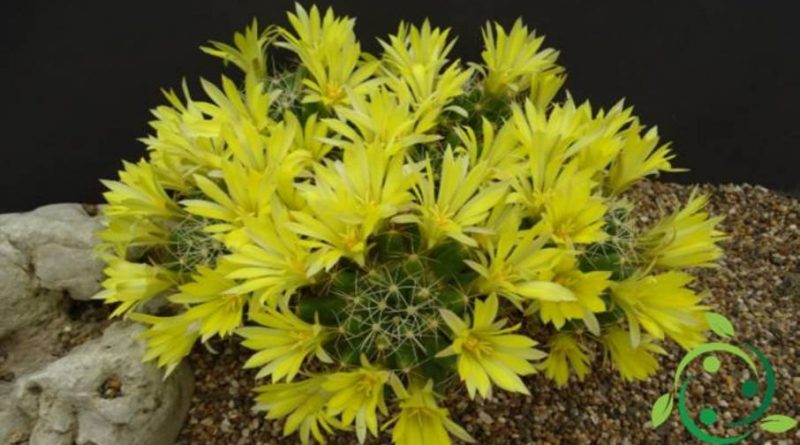 The Dolichothele are a subgenus of the Mammillaria species (Mammillaria Haw., 1812); they are succulent plants of the Cactaceae family of origin in the central and northern parts of Mexico and the state of Texas in the United States of America.
These plants have a generally globular shape with fleshy and long tubercles ending with an areola provided with various spines.
The color and thickness of the spines can vary greatly.
The flowers, on the other hand, are rather large compared to the plant (around 6 cm), of yellow or white color, with the shape of a funnel from which numerous, long and narrow petals branch out. They mostly appear on top of the stems.
Each plant has two blooms, one in early spring and one in late summer. However, they are small plants, easy to recognize compared to other mammillarias.
The roots are often very large and fleshy especially in adult plants so they can be grown in spacious pots.
To the subgenus Dolichothele belong some species of which we remember above all:
– Mammillaria baumii;
– Mammillaria carretii;
– Mammillaria longimamma;
– Mammillaria melaleuca;
– Mammillaria paulii;
– Mammillaria sphaerica;
– Mammillaria surculosa.

Dolichothele longimamma is among the most widespread. In this species the characteristic tubercles are even more pronounced and give the plant the appearance of almost a star.
In this card we will see how to cultivate the Dolichothele following their soil and climatic needs.
For these plants a partially shaded exposure must first be chosen but avoiding the direct sun of the hottest hours.
Furthermore, the minimum temperatures must never fall below 5 ° C; this means that it can be grown outdoors only in particularly mild climates or in pots and in this case it is advisable to put the plant away from the cold weather.
The optimal soil must be very loose, even gravelly, mixed with well humified and highly draining organic substance. In general Dolichothele require porous soil composed of fertilized earth, sand and various debris or very coarse gravel.
As for water supplies, it is advisable to water abundantly 1-2 times a week in the period from spring to summer, to then progressively decrease and stop completely during the winter.
Obviously as it is for the other cacti, it is necessary to pay a lot of attention to the stagnation of water so that between one watering and the other the ground must be able to dry completely.
For fertilizing choose a specific product for succulents, rich in potassium but low in nitrogen and proceed every 15 days mixing the fertilizer with the water used for watering. If, on the other hand, Dolichothele is grown in the ground, it is advisable to add organic matter to the vegetative growth in spring, distributing it at the base of the plants and then covering it with part of the soil.
For repotting operations to be done every 2-3 years, special care must be taken not to damage the root.
The reproduction takes place by seeds deposited on a bed of damp sand and kept at a temperature of 21 ° C; when the seedlings have sprouted, they will be kept moist and protected from sunlight.
Sometimes at the base of the plant sprouts suckers, which can be taken and used as cuttings with excellent results.