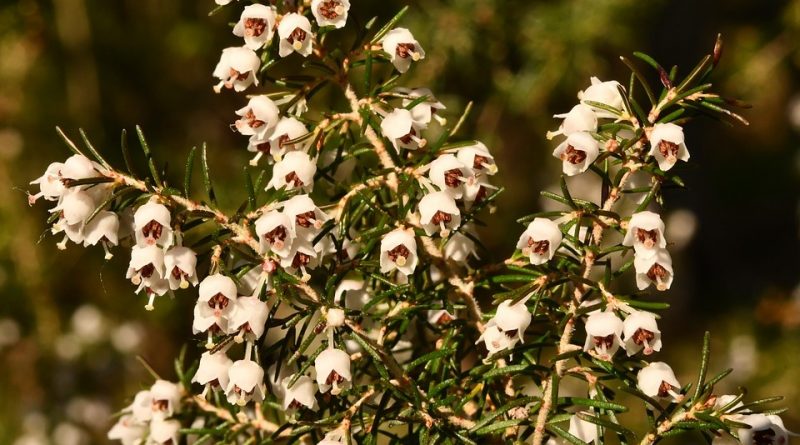 Erica arborea, or radica or wood broom (Erica arborea L., 1753) is an evergreen shrub, belonging to the Ericaceae family.

Systematics –
From the systematic point of view it belongs to the Eukaryota Domain, United Plantae, Magnoliophyta Division, Magnoliopsida Class, Ericales Order, Ericaceae Family and therefore to the Genus Erica and to the E. arborea Species.

Etymology –
The term Erica comes from the Greek ἐρείκω ereíko to mince, to crumble: for the habitat of debris. The specific arboreal epithet comes from árbor tree: with arboreal habit.

Geographical Distribution and Habitat –
Erica arborea is a plant distributed in northern and central-eastern Africa, southern Europe, and the Canaries. In Italy it has a peninsular distribution with populations present even beyond the Apennine watershed; it is also present in the islands where it is a typical element of the Mediterranean maquis, especially of the habitats of the Italian coastal regions and in environments with siliceous and / or acid soil. It is also a slow-growing plant that prefers sunny exposures. 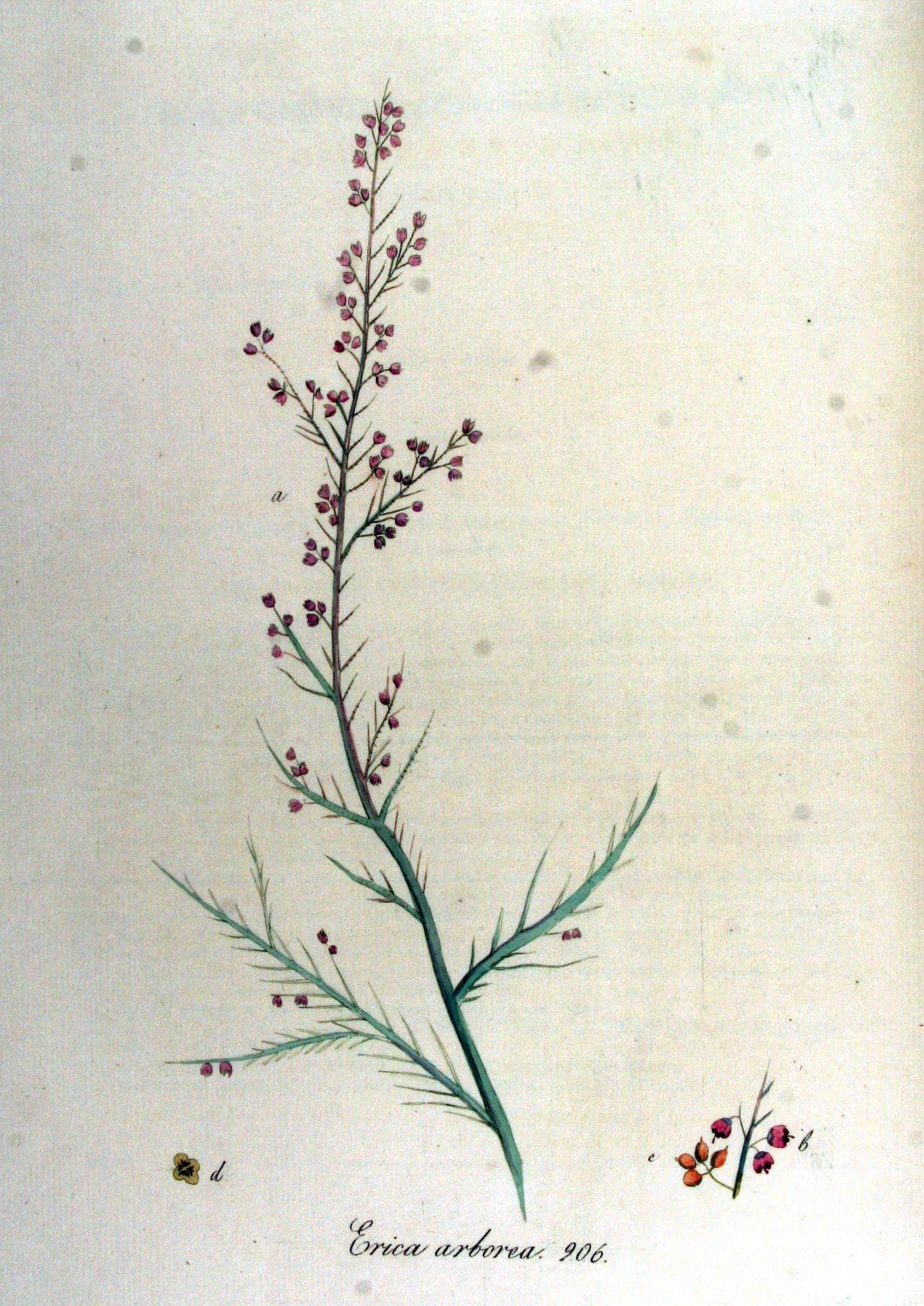 Description –
Erica arborea is recognized as an evergreen shrub, almost always erect, up to 4 meters high, with reddish-brown bark and young branches with a feathery appearance.
The leaves are needle-like, dark green, 3-5 mm with a serrated edge, very resistant to winter cold.
The flowers are bell-shaped of 2-4 mm, of white-cream color and united in rich terminal inflorescences.
The fruits are made up of capsules containing numerous small seeds.
The anthesis is in the period between March and May.

Cultivation –
This perennial shrubby plant is very well suited to cultivation in Mediterranean climates, where it does not require excessive care.
Care must be taken, however, to place it in an acid soil, properly worked, so as to make it sufficiently soft, placing it in well-ventilated areas. For growing in pots, it can be useful to prepare a substrate in which there are dry leaves, a little sand and peat. The quality of the soil is fundamental for its growth and bears well the winter temperatures, if these do not fall below 7 degrees. The water balance is guaranteed by constant watering and occurs every fifteen days but should not be excessively abundant. For optimal growth it is necessary for the irrigation water to be free of limestone.

Uses and Traditions –
A typical use of briar is the branches of heather tied in bundle that are used to make brooms, which is why this plant was called scopiglia; furthermore, once these branches could constitute the roofs and walls of poor houses and huts.
The reddish wood of erica arborea is hard and precious, and is the most used material in the construction of pipe stoves. The part used to obtain the pipe is the knotty part of the base, in the corner, the so-called “ciocco”.
For this purpose the Erica arborea shrub must be at least 50 years old for the log to reach the minimum necessary volume. The massive absorption of silicon from the soil makes the log fireproof. The “ciocchi” provide a very hard, unalterable, light and extremely heat resistant wood, which makes Erica briar wood a material suitable for the construction of pipes. A worker can extract and clean up to 150 kg of log a day.
The processing of the logs is long and laborious: after extraction proceeding with two instruments: one, called “maniscure”, with which the roots are freed and the other, called “pinnate”, with which the log is cleaned freeing it from broken parts and giving it a rounded shape.
Having carried out this first process to prevent the logs from cracking deeply, they are placed under a damp layer of earth; they are then cut into “sketches”, then boiled in copper pots to eliminate the tannin that could create cracks during drying, and to give the wood a heavier color, then placed to dry and season in places with temperature and constant humidity even for several years. The peculiarity of the raw material, the type of workmanship, make the pipes all different from each other. There are also unique collector’s items, made from perfect briarwood plaques and with particular aesthetic features, which present harmonious veins, flaming, partridge eyes, exceptional designs, for which each piece acquires its uniqueness.
An entire passage of an old manual of natural sciences from the 1920s is reported: “The extraction of the log takes place immediately after the cutting of the coppice; the workers employed proceed with two instruments: one, called the maniscure, with which they extract the log and free it from the tenacious roots and the other, the pennate, with which they clean it and free it from the faulty parts to give it the adequate round shape. A worker of common ability can extract and clean up to 150 kg of “ciocco” per day. After a first processing it is kept under a moist layer of earth to prevent cracking and deep.
Production varies greatly; in the Maremma’s ericeti, with a rotation of 40-50 years, a quantity of crude product is obtained per hectare ranging from 500 to 1,500 kg. The best “logs” are obtained from plants with stunted aerial vegetation that grow on the south-facing slopes.
In the factory the “ciocchi” are stored in clusters under canopies; the processing yield is 25-30% and from a ton of medium quality “ciocchi”, about 4,000 sketches are obtained with the following dimensions: thickness 2.8 cm, height 3.2 cm, length 5.5 cm. If the raw product is of good quality and the workers are qualified, you can also get 5,000 sketches per ton. 25 different types of sketches are marketed, corresponding to the different pipe sizes.
After preparation, the sketches are boiled for 12 hours to give the wood a more solid and uniform color and to eliminate part of the tannins. ”
Nowadays the collection is regulated by laws, permits and authorizations, while the processing phase is almost unchanged. Instead, the size and dimensions of the sketches described are striking: certainly at the time the pipes were smaller than those of today.
The lower part of the ceppa, on the other hand, was “cooked” (interrupted combustion) in the charcoal pile in the woods, to obtain a coal capable of developing a lot of heat. Coal from heather wood was required in the workshops of blacksmiths for iron forging.
Once upon a time to obtain cocoons for silk spinning, the silkworms were often placed on heather branches.
The flowers have medicinal interest and the plant is medicinal. The infusion of the flowering tops is considered diuretic, disinfectant and antirheumatic; in ancient times it was believed that it had the virtue of healing the bites of vipers.
They also have an antiseptic action due to the presence of arbutin; as such they are used in cases of cystitis, especially prostatic ones.
It is often associated for the purpose also with Malva Purpurea, Fumaria and Mint, and are to be preferred to other preparations, such as Bearberry, especially in long-term care, as they are non-toxic.
The flowers also have a beekeeping use: they are bottled by bees, an excellent monoflora honey is obtained, it is a good melliferous plant, for the period of flowering it has more humidity than others. The honey is bitter, but much appreciated despite being hard and requires a difficult processing made even more difficult by the fact that its early flowering is already around May.

Preparation Mode –
With the flowers of Erica arborea you can prepare herbal teas. You can prepare an herbal tea for chronic cystitis that is obtained by distributing a heaping spoon of heather flowers in a liter of decoction water for 15 minutes. It should be consumed in cups during the day, away from meals.
It is widely believed that even a cold can be cured with a single cup of very hot herbal tea before bedtime, sweetened with lots of honey and 50% cognac. If the cold does not pass, at least this herbal tea can heat us up in winter.