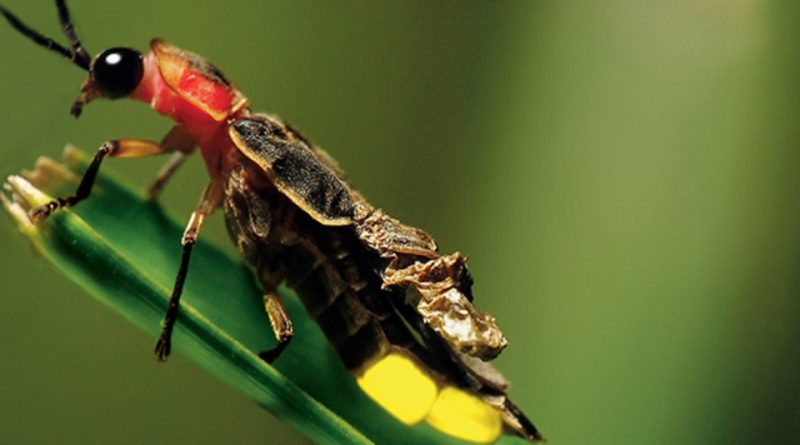 The Italic Firefly (Luciola italica L. 1767) is a beetle belonging to the Lampyridae family.

Geographical Distribution and Habitat –
The Italic Firefly is present only in Italy and in the Western Balkans where it needs completely dark environments to survive because street lamps and light pollution in general hinder or even prevent the encounter between the two sexes. Its habitat is also represented by wet and limestone areas where it feeds mainly on snails.

Morphology –
The Italic Firefly is recognized at the adult stage to have the males are winged, with a long and slender body, with an average length of 5-9 mm but which can exceed even the centimeter. These are able to fly about a meter from the ground or to rest on stems. The females have a slight sexual dimorphism, are rarer, are winged, but have a more squat and short body and live normally on the ground barely hidden by the grass.
Both in males and females the pronotum does not completely cover the head and may present a central reddish spot. The elytrons are dark brown and cover the whole body. In the ventral part, the terminal part of the abdomen is white and it is in this area that, through biochemical reactions, there is the emission of light.

Attitude and biological cycle –
Luciola italica is an insect that, at the adult stage, has the purpose of reproducing while the nutritive phase is relegated almost exclusively to that of the larval stage.
The larvae, in fact, for feeding, prey on snails and slugs that hold with the powerful jaws while injecting into their body a digestive liquid that reduces them to pulp. With this system the larvae can gradually feed on preys much larger than themselves.
After reaching the stage of maturity, after some wetsuits, we arrive at the adult stage which, between the end of May and June, begin to mate.
During this phase the females prefer to wait for the mate on the stems of the plants, responding to the luminous calls they emit. The fact that this insect emits light is closely linked to the reproductive phase.
The light emission of the two sexes is different between the two sexes but also according to the different species. Normally the male emits light intermittently while the female in a more continuous manner. Light is produced in the period from twilight to night.

Ecological Role –
Italic Firefly, like other fireflies, plays an important role in controlling snails and limacids especially in those areas where agricultural production conditions are perfectly agroecological. In very polluted environments, due also to the use of pesticides or to the excessive presence of brightness, which interferes with the coupling phase, the population of these insects drastically decreases until it disappears.
In these conditions the balance of the ecosystem is broken to the advantage of their preys which are struggling with other pesticides to be contained.
Furthermore the presence of water is important for the ecological balance of this species and for the reproduction phase. In fact, in order for the chemical reaction that allows the bioluminescent organ to function to occur, the presence of wet habitats is necessary.
The light emitted is due to the oxidation of the luciferin photogenic substrate to oxyluciferin, which occurs in the presence of oxygen thanks to the catalysis operated by the luciferase enzyme. It is a cold light, whose wavelength fluctuates between 500 and 650 nm. The intensity instead varies according to the species (there are around 2000).