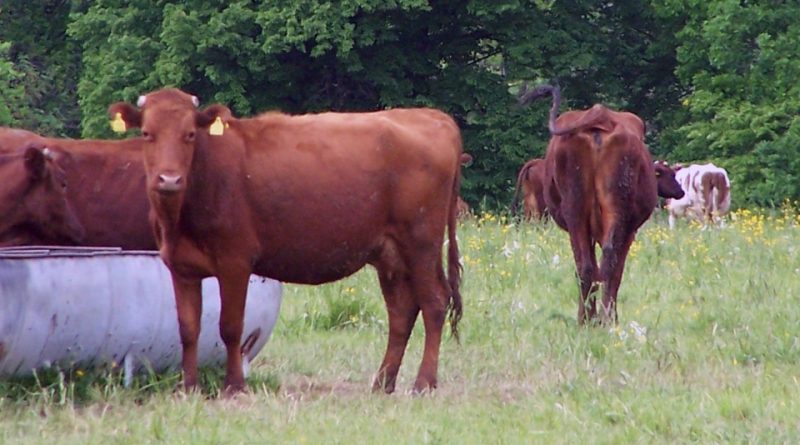 The Polish red cow or Polish Red is a bovine breed (Bos taurus Linnaeus, 1758) of Polish origin, with dual aptitude for meat and milk production.

Geographical and area distribution –
Polish Red is a breed born and selected in Poland where today it is bred in a few animals and in small companies. To safeguard this breed from extinction, safeguards are in place.

Origins and History –
The Polish red race (local name Czerwona polska) descends from the prehistoric line of short-horned cattle (Bos taurus brachyceros) with breeding origins dating back to the second half of the nineteenth century, when the herds of this breed settled in the Polish lands, particularly in the south.
According to historical data, the first herds of Polish red cattle were already created around 1850.
Subsequently, on the initiative of 14 farmers in southern Poland, in 1894 the Society of Polish Cattle Breeders was founded. The following year the Red Cattle Association was established at the Kraków Agricultural Society.
Later on, crosses were made with the Frisona Pezzata Rossa and the Shorthorn. After the Second World War other crossings were carried out with the Danish Red. Since 1978 angler bulls from Germany have also been used.
In the interwar period, the Polish red race represented 25% of the national bovine population. In the 1960s, there were still about 2 million cattle of this breed, which represented 18% of the population.
In the following years there was then a rapid reduction of the population of Polish red cattle, due to the introduction of more productive breeds and the use of the crossing of improvement with imported red cattle.
To protect the breed from extinction, a program was launched in 1999 for the conservation of the genetic resources of Polish Red. The program is currently coordinated by the National Research Institute of Animal Production.

Morphology –
Cattle from Polish Red are characterized by a coat with a uniform color ranging from red to dark red, with dark claws and musk and short shiny horns, with strong legs and hard claws.
However, the head, neck and limbs are often darker than the other parts of the body. They are medium-small animals with adult females weighing 400-550 kg and have a height of 122-128 cm at the withers.

Production aptitude –
The Polish red breed is characterized by good resistance and health, longevity, excellent fertility, easy vitality, high vitality of calves, easy to breed and high biological value of milk.
They are also cattle that have an excellent adaptation to the difficult environment, the ability to reduce performance in order to survive the lack of seasonal food and a fairly rapid recovery of any lost health conditions.
It is a non-demanding breed in terms of feed quality, which makes it suitable for living and production conditions in sub-mountain and mountain areas. Furthermore, their milk has important qualitative characteristics such as a high content of proteins, fats and solids, high biological value and suitability for cheese production.
In 2006, the average yield of cows included in the genetic resource conservation program was 4028 kg of milk containing 4.28% fat and 3.34% protein.