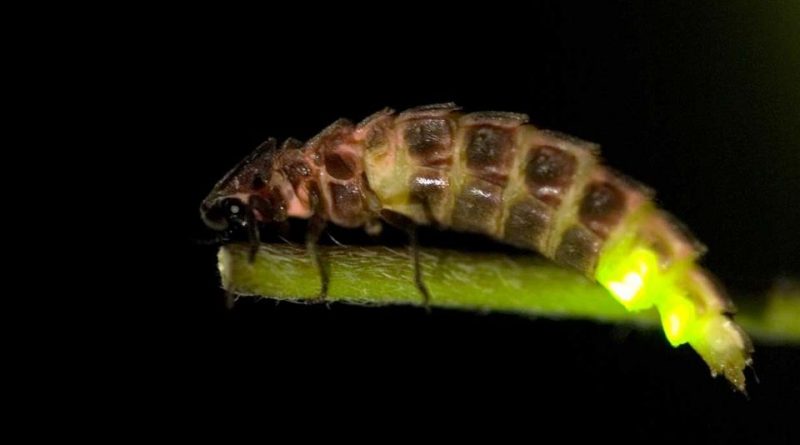 Glow-worm of Europe (Lampyris noctiluca L. 1767) is a beetle belonging to the Lampyridae family.

Geographical Distribution and Habitat –
Lampyris noctiluca is a beetle that has a geographical distribution ranging from Portugal and Great Britain to the west, right through Europe and Asia to China in the east. It is the firefly most present north of any other firefly, reaching almost the Arctic circle. It is not present in North America, South America, South Asia, Africa, Australia and Antarctica.
The habitat of these beetles is represented by grasslands above all on calcareous and calcareous soils. They are also found in the undisturbed edges of crops, in the moors. The larvae of this insect live in sheltered places – under rocks and wood, but move on different types of land.

Morphology –
The adult male of this insect is winged and has the yellowish body and appendages, the yellowish pronotum, with a large dark spot and the dull brown elytra, sometimes yellowish along the edges and the suture.
The female is instead of larviform aspect and deprived of wings. This can reach 25 mm in length, with pronotum similar to that of the male, while the abdominal segments are dark brown and pink edged.
Another difference, within the sexual dimorphism between male and female is that the female can emit light for hours while the male only for brief moments.
The living larvae are segmented, with the legs present and almost as long as the adults.

Attitude and biological cycle –
The Lampyris noctiluca is a beetle that goes through a long larval period before reaching maturity.
In fact, the larvae live for two or three years, performing four or five moults during their existence before becoming adults. In winter they shelter in ravines, in the dark and go into hibernation, only to wake up in the spring. These become adult from May to July or sometimes later, surviving in the food reserves accumulated over time.
The adults of this beetle often appear in isolated individuals with the males flying in search of the females emitting flashes of light. Females, which are much rarer and more difficult to see, crawl to the ground making themselves noticeable for their brightness.
This activity normally takes place between 10 and 12 pm, in the period between June and July; in these months the females move to areas where they can be seen and reached by a male, and activate the luminescence of the three terminal segments, lifting them to make them visible. The light emitted is a beautiful bright green and stays on for about two hours, if a male does not arrive; after which the female retires to her hiding place and re-emerges the next night. This ritual can be repeated for a few nights.
The nutritional phase of this insect is relegated to the larval stage where the larvae feed mainly on snails and slugs. The prey is attached to bites, injecting a toxic brown digestive fluid. The fluid acts slowly, paralyzing the victim and turning part of it into a brown porridge, which the larva sucks. In some cases the victim manages to drag herself away and survive the meal. The larva attacks even larger snails and is activated in the same hours of greater activity of the preys, ie at night and in humid climatic conditions.
Interesting is the biochemical mechanism that allows the light emission. The chemicals involved in light production are luciferin and luciferase, whose exact composition is genetically conditioned, producing subtle variations from individual to individual. In this chemical transformation, almost all the energy is transformed into light, and only 2% is dispersed in heat.

Ecological Role –
Lampyris noctiluca plays an important ecological role in limiting the population of snails and slugs and the decrease of this insect, due to the use of pesticides, creates considerable ecological imbalances with the proliferation of snails and slugs that can often create particular problems especially in crops vegetable.
Among the other threats against this beetle we mention the destruction of the habitats where they live, the fragmentation of the same, the distraction linked to the presence of artificial lights, which interfere with their mating phase, insufficient grazing and climate change.