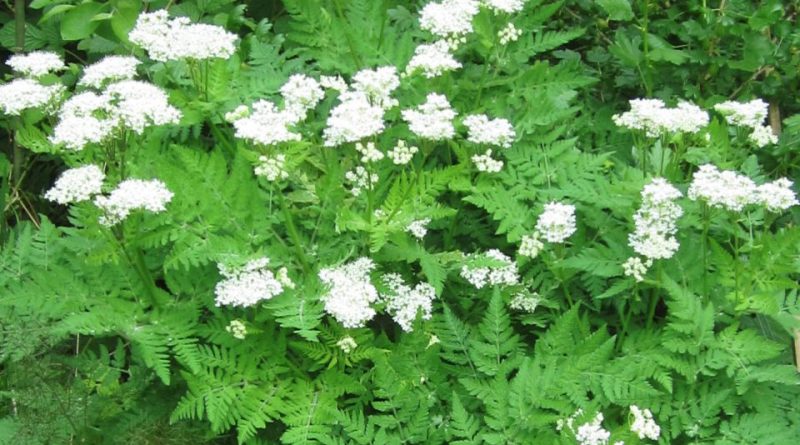 Etymology –
The term Myrrhis comes from the Greek μύρρα mýrra mirra, derived in turn from the Hebrew môr (in Arabic murr), which means bitter. The specific epithet odorata comes from odóro esalare perfume: odorous, perfumed, with a pleasant smell.

Geographical Distribution and Habitat –
Sweet Cicely is a perennial herbaceous plant native to south-eastern Europe, typical of southern European chains, from the Iberian Peninsula, the Alps, the Balkans and possibly the Caucasus or Anatolia and widespread in Italy up to 2,000 m s.l.m. on the Alps, the Apennines, the Pyrenees and in Great Britain.
Its habitat is that of woods and grassy meadows, pastures, on preferentially calcareous soils. 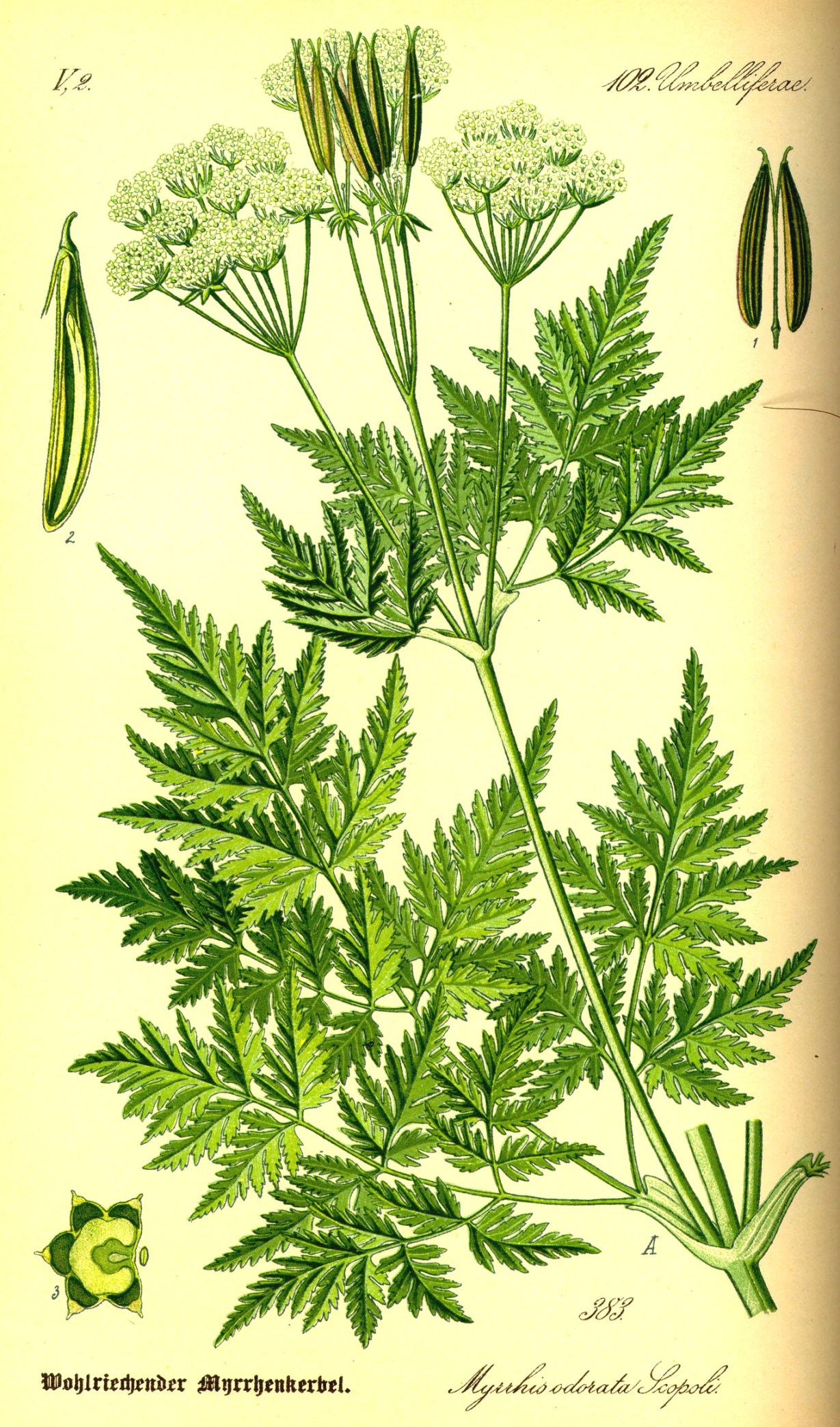 Description –
The Myrrhis odorata is a very hairy plant, characterized by erect and hollow, branched stems, with an average height of 60 to 120 cm. about.
The leaves have a triangular outline, similar to fern fronds.
The flowers are small and white and gathered in umbrellas of 5-8 rays.
The fruits (improperly called seeds) are polachenari, oblong, deeply furrowed, whose mericarps, which measure 20 (30) x 3 mm, become blackish when ripe and have prominent, acute and subulate ribs, with peaks of 2 mm.
The plant gives off an intense aroma.

Cultivation –
Sweet Cicely is a plant that can be cultivated easily with sowing in autumn in milder or spring climates in colder ones, preferably in fresh soil. After sowing a thinning should be done to eliminate too dense seedlings.
The inflorescences in the shape of an intense yellow umbrella are hand-picked early in the morning between June and August.
For details of the cultivation technique, see the following sheet.

Uses and Traditions –
Sweet Cicely was a sacred plant for the ancient Romans, but practically always used since it is widely distributed throughout the Mediterranean basin, it is in fact fundamental in Greek mythology and for the history of humanity. It was indeed with a branch of fennel that Prometheus managed to capture the fire by robbing it of Zeus on Olympus to give it to men.
Pliny the Elder in the work Natural Historia argued that fennel was a remedy for about twenty disorders, and that it had aphrodisiac properties.
The relationship between fennel and wine is also rooted throughout history. A goddess of fennel was worshiped, whose priestesses adorned with fragrant twigs, they used to drink wine flavored with seeds before giving voice to premonitions. Regardless of divinatory purposes, flavoring wine with fennel is a habit that has remained in use for a long time. Very often the spice was used to alter poor wine by covering it with its taste and smell, hence the term being fooled. However, even today some sommeliers use to chew fennel seeds between one taste and another to clean the mouth.
The fennel is used for its fresh or dried leaves; it should be dried in a shady and ventilated place. For this operation the umbrellas must be cut when the seeds are almost black and let them dry tied in bunches.
The flowers instead tied in bundles are left to dry in greenhouses, then crumbled with hands and then sieved to obtain a very thin grain, almost a powder. The spice that is obtained maintains a beautiful yellow-green color and has a much more intense aroma than fennel seeds and with notes reminiscent of licorice. Compared to the seed, the flower, also due to the process of harvesting and processing, has a decidedly higher cost. However, it has a clearly greater yield and to aromatize a dish it is really enough a pinch.
You can uproot the roots in autumn by removing the side radicles, cut them into pieces and dry them in the sun.
Sweet Cicely has therapeutic properties: tonic, antiseptic, digestive, diuretic, emmenagogues.

Preparation Mode –
The leaves, lightly scented with anise, are used to flavor fillings, soft cheeses, sweets and ice creams. The roots and seeds are used to flavor grappa and liqueurs.
In the kitchen the uses are therefore multiple; Sweet Cicely goes perfectly with pork and is one of the essential spices for a good roast pork. It enhances the flavor of blue fish and is exceptional in pasta with sardines or anchovies. To better appreciate all the aromatic notes, just put a pinch on the very simple boiled potatoes.