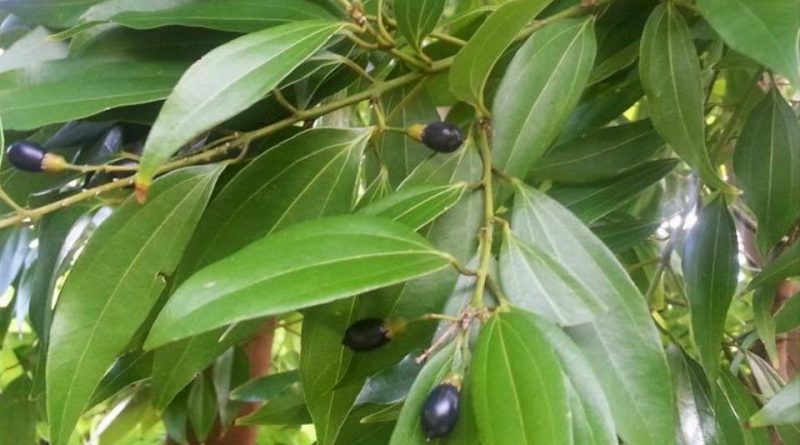 Systematics –
From the systematic point of view it belongs to the Eukaryota Domain, United Plantae, Magnoliophyta Division, Magnoliopsida Class, Subclass Magnoliidae, Order Laurales, Family Lauraceae and therefore to the genus Cinnamomum and to the species C. cassia.
The term is synonymous: Cinnamomum aromaticum Nees.

Geographical Distribution and Habitat –
Chinese cinnamon is a species native to China and Southeast Asia. Today this plant is widespread and cultivated in many tropical areas. 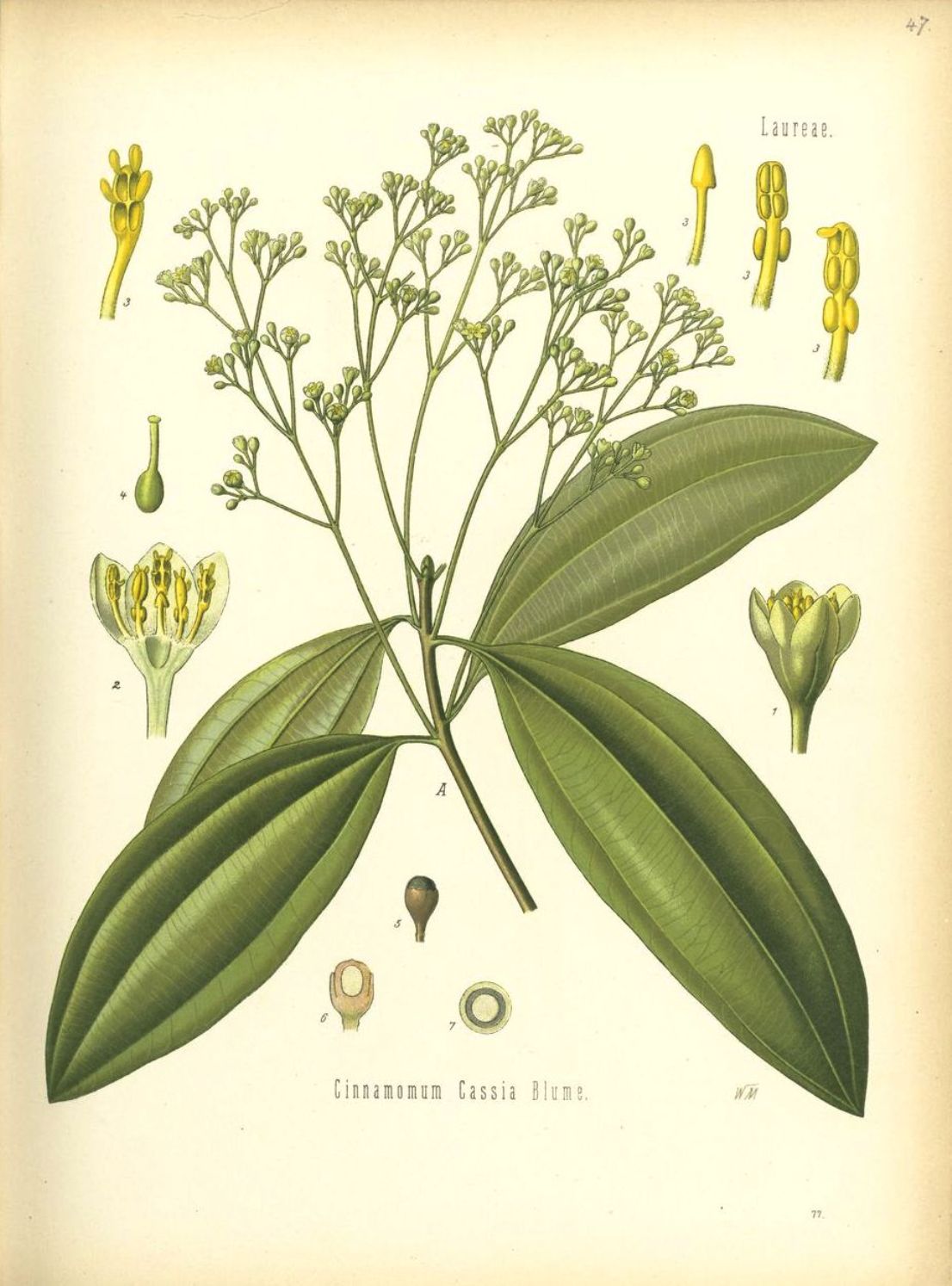 Description –
Chinese cinnamon or cassia is an evergreen tree very similar to cinnamon (Cinnamomum verum) from which it differs for its greater grandeur.
It has opposite, oval and elongated leaves, with a more pointed conformation, of oscillating dimensions between 10 and 18 cm of length and 4 – 5 cm of width.
The flowers are white and gathered in inflorescences.
The fruit is a drupe that contains only one seed.
From Cinnamomum cassia, from the bark of its young branches, a cinnamon is obtained which has a rough surface, a thickness greater than a millimeter, an exterior color tending to greyish and a less pronounced aroma compared to Ceylon cinnamon.

Cultivation –
The cinnamon plants, being native to the tropical zone, need an environment with a temperature that is constantly high and with high contents in percentage humidity. For the details of the cultivation technique you can follow the instructions in the following tab.

Uses and Traditions –
Cinnamon is perhaps one of the oldest spices that is still used today in the form of small canes or sticks. The name, from the shape of a small cane that it assumes when it is dried for conservation, indicates the inner part of the bark of the young branches of two different plants: the “Cinnamomum zeylanicum” and the “Cinnamomum cassia”.
The first of light hazelnut color, with a penetrating but delicate aroma, is called “real cinnamon”, “cinnamon queen” or “Cylon cinnamon”, and it has always been much more valuable than “cassia”, which is the Chinese cinnamon of reddish brown color with a stronger aroma.
This spice has a long history.
From the findings it is clear that cinnamon was already used by the ancient Egyptians in 3000 BC for embalming. It is also mentioned in the Bible, in the book of Exodus, when God orders Moses to consecrate the Temple with a mixture of aromatic substances.
In ancient times, although coming from the East, Greeks and Romans believed that it came from Arabia or Ethiopia and was collected in bizarre ways. According to what Herodotus tells us, cassia cinnamon was born in a shallow lake on whose banks thousands of birds, perched like bats, were ready to attack anyone approaching. To collect it the Arabs wrapped their bodies and faces with ox skins.
In the Mediterranean basin, cinnamon was known for its high value already in the classical era, and Pliny himself complained about its exorbitant price.
In the Middle Ages it had then become one of the expensive gifts that the nobles gave to kings and queens as a symbol of prestige. Its therapeutic principles were used to treat coughs and sore throats, while its aromatic qualities made it spread in profusion over every sweet or savory dish, making it inevitable in the court kitchen, along with pepper. This spice was an ingredient in both the famous “camellina” sauce (Taillevent’s recipe) and the “verte souce”, mentioned in the cookbook of King Richard II of England (14th century).
This brings us to the Renaissance when Nostradamus included it as the substance of his powerful love filter, and Mattioli considered it so rare that it was difficult to find even in the markets of Venice and Naples.
The Greek and Roman physicians, despite having classified this spice as hot and dry, did not attribute particular aphrodisiac effects to it, as did the doctors of the Scuola Salernitana who wrote about cinnamon:
Accendit Venerem cum vaccae recent lacte … auget semper amorem, alleviat mentem.
(It excites coitus with fresh cow’s milk … it always increases the stimuli of love, strengthens the intellect).
The aphrodisiac properties of cinnamon were highlighted by physicians throughout the sixteenth century, then over the centuries this aspect took second place compared to the aromatic qualities of the plant.
In the nineteenth century it was one of the four spices automatically considered in cookbooks when it spoke of “a pinch of spices or drugs” (the others were nutmeg, cloves and pepper).
Nowadays cinnamon is appreciated not only for its sweet and delicate aroma, but also for its effects on the body. In the East it is traditionally used as a stimulant and to treat ailments such as colds, indigestion, rheumatism. The use of cinnamon in hot countries is largely due to its antiseptic power, the same that can be exploited in temperate climates to fight fever and flu. The polyphenols contained in this spice, whose activity in the body is comparable to that of insulin, also reduce blood sugar and prevent blood glucose from turning into fat storage. The recommended therapeutic dose every day is one teaspoon.
As for harvesting and conservation, the inner part of the bark of the young branches is used after having removed the cork and dried.
Cinnamon sticks are preserved for a long time as long as they are kept in tightly sealed jars, protected from humidity, light and heat.
The quality of cinnamon depends on the age of the cinnamon branches from which it is made; the more the branches are young the more the drug is estimated.
The most important active ingredient of cinnamon is coumarin (IUPAC name: 1-benzopyran-2-one) which is an aromatic compound. At room temperature it is presented in the form of colorless crystals, with a characteristic odor.
Moreover, like the bark of Cinnamomum verum, also that of Cinnamomum cassia is rich in essential oils, consisting mostly of cinnamic aldehyde and in small amounts of eugenol, tannins and flavonoids.
1 kg of cinnamon contains 3,000 mg of coumarin, on average up to 63 times (in powder) and 18 times (in sticks) the amount of coumarin present in Ceylon cinnamon. Coumarin consumption can lead to potential liver damage. The coumarin contained in cinnamon is the one with the highest absorption and bioavailability.
Cassia cinnamon is associated with anti-diabetic properties. In a series of studies, MHCP (methylhydroxychalcone polymer) and other polyphenols, soluble in water and therefore absent in oil and in industrial additives, present in Cassia-type cinnamon have imitated the activity of insulin in patients with type diabetes 2 or at high risk for this disease, occupying cellular receptors and reducing glycemia and glycogen synthesis.
In general, cinnamon has therapeutic properties: antiseptic, stimulating, digestive and carminative.
Cinnamon, as a spice, is used as a condiment in gastronomy but is also used in perfumery and aromatherapy.

Preparation Mode –
Cinnamon, thanks to its strong and pleasant aroma, after being reduced to powder, is used in the kitchen to flavor cooked fruit, puddings, tea and mulled wine.
Cinnamon gives the best of itself however with cakes, cooked fruit and biscuits, although some traditional recipes, such as stews, stews, salmì see it present.
The normal cinnamon sticks must be crumbled or powdered before use unless it is directly indicated in the recipe.
In the countries of northern Europe it is irreplaceable in desserts generally called “spice cakes”, as well as in farce and leavened pastas.
Also in pastry the powdered cinnamon must be mixed with the dough when they are still raw and only towards the end of the processing.