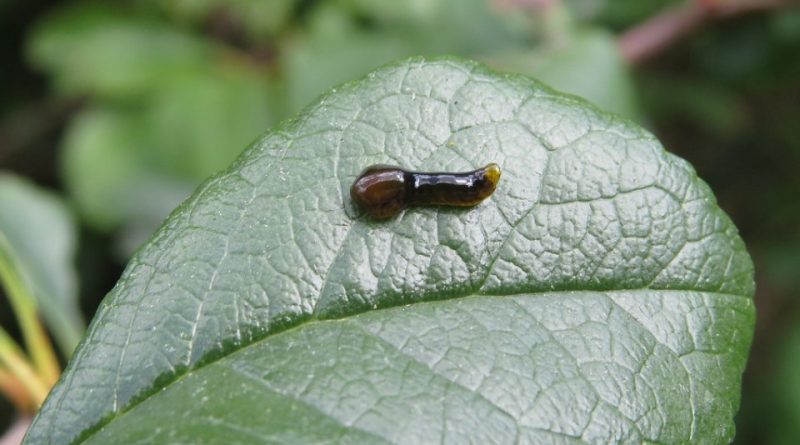 The pear slug or cherry slug (Caliroa limacina Retz.) Is a small hymenopteran belonging to the Tenthredinidae family.

Geographical Distribution and Habitat –
Caliroa limacina is a small hymenoptera which is diffused a little everywhere in areas with a temperate and warm climate where, however, it does not cause significant damage.
This insect lives on some fruit trees including, in particular, pear and cherry; more rarely on apricot, plum, almond, hawthorn, raspberry and quince apple.

Morphology –
The pear slug or cherry slug is a small hymenopter, whose adults have a shiny blackish body, measuring about 4-5 mm in length, with a 10 mm wingspan, transparent, with slight dark shades in the middle part and with brown veins.
The larvae, due to their appearance, are similar to small Limacce, hence the term Limacina, with the mucilaginous body of yellow-greenish or purplish color, tending to transparent, thus making the dark colored internal parts visible. These have a clavate shape, with an enlarged and gibbous front with black head and legs. The larva reaches 8-10 mm in length.

Attitude and biological cycle –
La Caliroa limacina surpasses winter in the ground at the prepupa stadium, protected by silky formations.
In spring the adults appear, which are predominantly female while the males are rarer. The mature females lay in the period of May, using the robust ovipositor, under the superior epidermis of the leaf and in correspondence of the points of ovideposition, where a small lenticular bubble develops.
From these eggs we have the first generation that lasts throughout the month of June.
The larvae emerge after 1-2 weeks, opening a gap on the upper page, and begin feeding on the upper page; when they reach maturity they free themselves from the mucus and let themselves fall to the ground where they are interceded to perform the metamorphosis.
This is followed by a second generation, in the period between late July and September, and possibly, in certain environments, and in favorable climatic conditions, also a third generation that overlaps at the end of the second.
These last generations originate the pre-pupae that close inside a bump bed, inside the ground, to spend the winter as prepupa.
The pear slug or cherry slug thus completes two or three generations a year.
The damage is evident on the leaves; the larvae devour the foliar mesophyll, leaving the veins intact and sometimes even one of the two epidermis.

Ecological Role –
The pear slug or cherry slug lives on plants of Pear, Cherry, Plum, and other fruit trees. The larvae, as mentioned, live on the upper page of the leaf, making extensive erosions of the same, respecting the ribs and the lower page; the most damaged leaves turn yellow and fall. Generally the damage caused is very modest as they appear on isolated plants.
The fight against this insect is almost never carried out directly because infestations rarely reach such intensities as to justify the intervention. In the case of particular and serious infestations the normal larvicidal insecticides can be used, taking care however to evaluate the presence of useful insects and therefore also the suitable period.