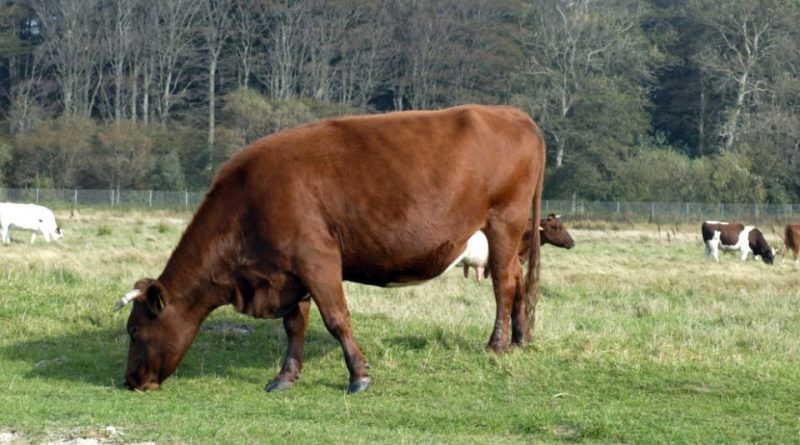 The Danish Red is a bovine breed (Bos taurus Linnaeus, 1758) native to the islands off the Danish coast, with a dual aptitude for the production of meat and milk.

Geographical and area distribution –
The Danish Red is a cattle breed bred in Denmark where once it represented the majority of cattle bred.

Origins and History –
The Danish Red breed of cattle, also known as Red Dane, is an ancient breed originating from the islands off the Danish coast and belongs to the group of so-called “Baltic cattle breeds”.
The breed was developed in Denmark through local breeds bred with Angeln and Schleswig cattle. The Danish red race, and before that the Angeln, have been imported into many other countries and have been used to improve and train many local breeds, such as the Lithuanian red, the Estonian red, the Latvian red, the Polish red, the red of Bilorussia, the Red of Russia and the Bulgarian redhead.
This breed accounted for 61% of Danish dairy cattle in the 1960s, but with the industrialization of agriculture it was gradually replaced by other breeds, such as Holstein, Jersey and Frisona, or crossed with the same up to the alteration of the genetic patrimony.
Today the pure Red Danish breed, uncrossed, has been extremely reduced to only represent 6.7% of Denmark’s bovine population. The breed was in fact classified as an endangered species by the Food and Agriculture Organization of the United Nations (FAO).

Morphology –
The Danish Red is a recognizable breed due to the rather dark uniform red coat, especially in the bulls, with chromatic variations. These are medium-sized animals.
Females have a height of 135-137 cm at the withers, with a weight of 600-650 kg.

Production aptitude –
The Danish Red is a dual-purpose bovine breed with a prevalence for milk production.
Traditionally, Danese Rossa milk was destined for dairy production, such as butter or Maribo cheese (a semi-hard cheese); today, however, it is mostly used for the production of drinking milk.
It has a robust, rustic and excellent transformation of fodder.
However from good productions of meat because of its marked precocity.
It is a breed that adapts well to various types of climate: it has a high resistance to heat, but it also tolerates low temperatures well.