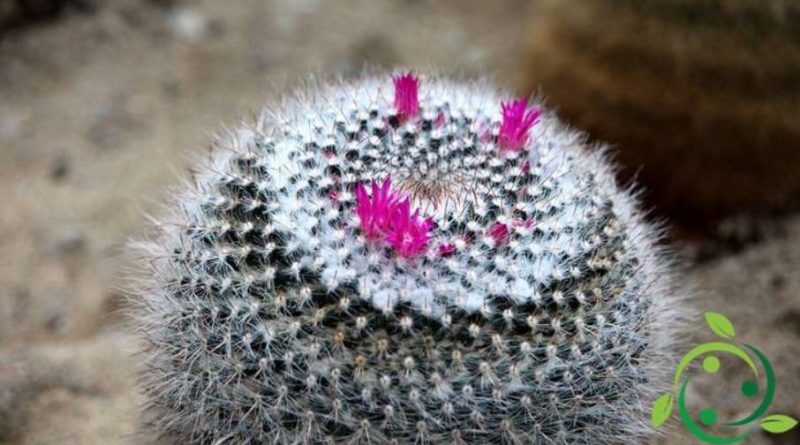 How to grow Mammillaria

The Mammillaria (Mammillaria Haw., 1812) are a genus of plants of the Cactaceae family, which includes 185 species, with different morphological characteristics.
However, Mammillarias are recognized for having globular or cylindrical stems that are usually low and can be either branching or crowding.
The tubercles are of various shapes provided with a more or less woolly areola provided with thorns. The spines are differentiated into radial and central with different shapes and consistency. Among other things, in many species one or more central spines are hooked.
Among the tubercles there is the axilla which, depending on the species, is glabrous or woolly. It is here that we have the flowering that in the genus Mammillaria is periapical (in other species of cactaceae the flowering is areolar).
The Mammillaria flower is small, even if there are species with showy and colorful blooms, with colors ranging from pink or fuchsia, to white or yellow (green in M. marksiana) or variegated.
In its biological cycle, the year following its flowering, the flowered axilla will emit the fruit, with an elongated shape and various colors: red, pale green, yellow, brown; the fruits in some species are also edible.
It should be emphasized that the apex is generally woolly, furthermore some Mammillaria if engraved emit a latex similar to that of euphorbiae.
In this card we will see how to cultivate the Mammillaria following the most appropriate indications for these species.
The first step is to choose or create the substrate; this must be very porous and draining; to the earth a variable percentage of draining materials such as lava, sand, coarse gravel or pumice should be added.
For the cultivation area or the choice of the location where to place the pot, consider that the Mammillarias are plants that need fairly sunny or full sun positions depending on the species.

The irrigations must be regular in the period from April to September and must be suspended between October and March, as these plants, in the winter period enter vegetative dormancy that does not require any watering.
It should be emphasized that species with dense fluffiness and apical and axillary down, or in any case covered by many thorns, have a greater tolerance to direct sunlight while those with sparse thorns and bare axillae show less resistance.
As for the temperature, the Mammillaria can withstand both high temperatures in summer and low in winter, even below 0 ° C for very short periods if kept completely dry. It is important, however, that the room always has a good brightness.
To fertilize it is advisable to intervene, in full soil, with a well-humified organic substance at the beginning of spring, mixing it in the first layers of soil; if it is cultivated in pots, fertilizers for succulent plants can be used with irrigation water to be added every 15 days.
Let’s see the multiplication technique.
The multiplication of these plants is by seed which must be placed on a bed of sand kept constantly humid, sunny and aerated to prevent the formation of mold and at a temperature that must never fall below 21 ° C but must not be much higher .
However, there are some Mammillaria that they acclimatize; in this case you can use the shoots produced by the plant.
It is necessary, as always, to take into account that with gamica reproduction (by seed) plants with genetic variability are obtained and therefore different from parents, with agamic (using suckers or plant parts) identical plants are obtained.
Finally, a rule to make the Mammillarias flourish more, which have two annual blooms, one spring and one in the late summer – autumn period.
In order to guarantee both blooms, it is advisable to make the plants respect a period of dry and cold winter and a dry period in August (thus respecting the natural cycle of the desert climate) to which it will have to follow in this last period from new irrigations until the suspension at the arrival of the cold.