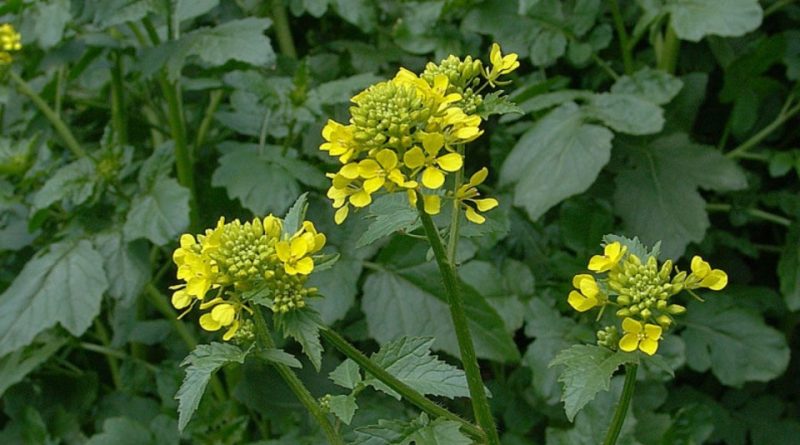 Etymology –
The term Sinapis comes from the Greek σῐνᾱπι sinapi mustard, but the name has Egyptian or Indian origins. The specific epithet alba comes from albus, white.

Geographical Distribution and Habitat –
White mustard is an annual herbaceous species with a Euro-Mediterranean distribution, present with three subspecies in almost all regions of Italy (it seems to be lacking in the spontaneous state in the north-western regions).
Its natural habitat is represented by the fields of cereals, uncultivated and ruins, below the lower montane belt.
White mustard is grown in Central Europe for its seeds used for the production of oil (28-30% of the weight of the seeds) or flour, which is used (especially in Germany and Austria) in the preparation of fruit preserves, meat sausages and canteen drugs. 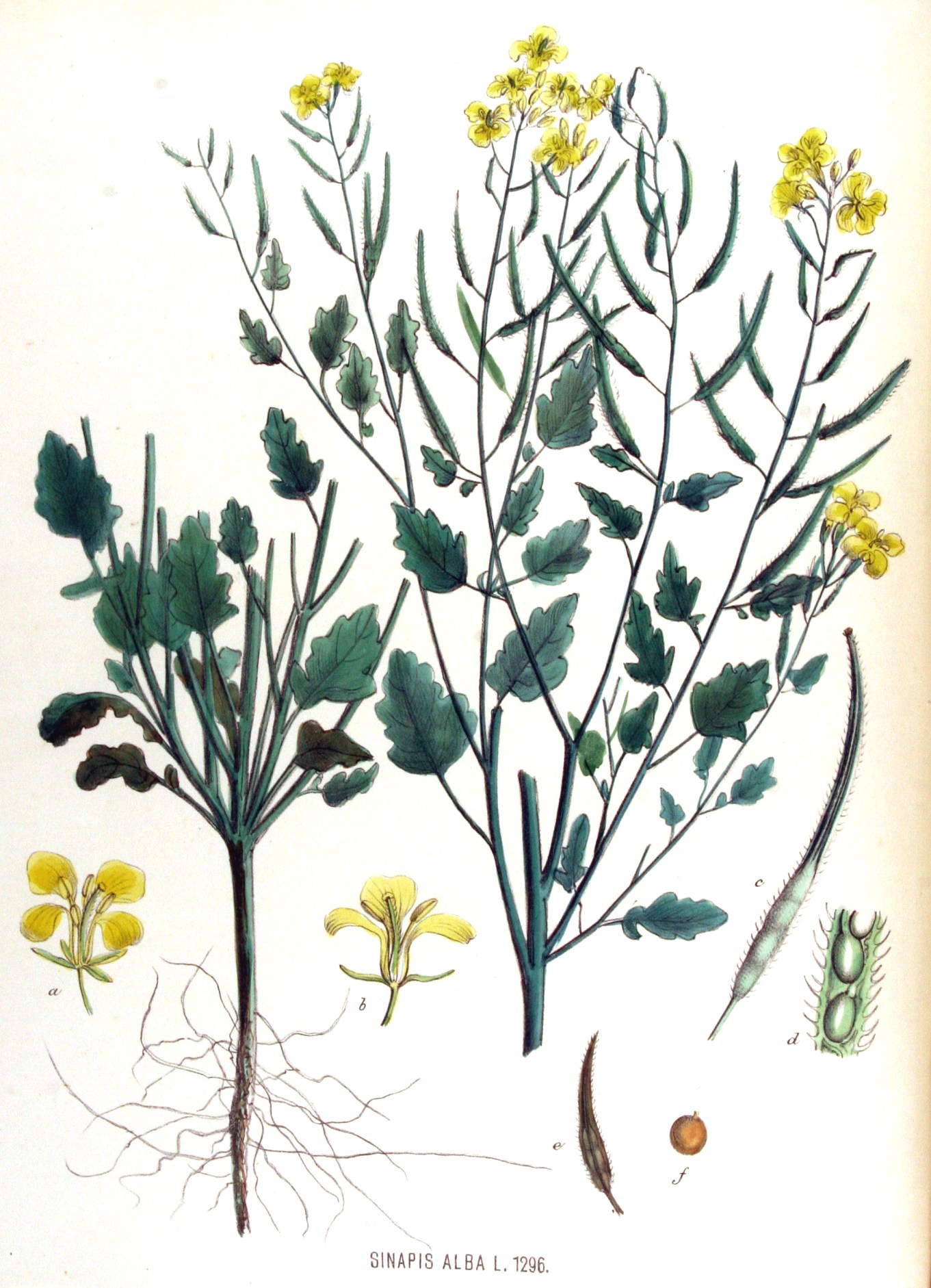 Description –
Sinapis alba is an annual herbaceous plant formed by a long, upright main stem that reaches heights of up to 70-80cm, composed of various branches. The leaves are pennatosette, with irregular oval lobes, toothed; the inflorescences are clustered with yellow flowers.
From the flowers, after fertilization, hairy siliques are formed.
The siliqua is patent or erect-patent, dehiscent, glabrous or bristly, 20-40 x 3-6.5 mm, enlarged in correspondence with the seeds, with an ensiform rostrum of 10-30 mm. The seeds, from 2 to 5, are spherical, measuring 2-3.5 mm in diameter, whitish to brownish in color in a single row.
The flowering period is: March-June.

Cultivation –
White mustard should preferably be grown on medium-textured soils that are rich in organic matter. In nature it grows in clay and limestone soils, but it adapts well to any type of soil, being a fairly rustic plant.
The optimal exposure for the plant is in full sun.
Sowing can begin as early as winter by cultivating in a protected environment.
For the preparation of the nursery it is necessary to procure small jars filled with a part of generic soil for sowing and a part of sand. The same soil must also be used for box cultivation.
The seeds should be placed in a 1-2 number per jar and covered with a thin layer of earth, after which regular waterings will be carried out until the seeds are germinated, leaving the soil surface always with a certain humidity.
For cultivation in the open field and for planting the seedlings it is advisable to leave a distance of 40 cm between the plants and a distance of 50 cm between the rows.
Cultivation in the open ground is carried out by making 2-3 cm deep postarellas; inside it should be placed 1-2 seeds that will be covered with a thin layer of earth. As for plants cultivated in a protected environment, regular waterings should be carried out until the seedlings are germinated. If necessary, the plants will be thinned out when they reach a height of 4-6 cm.
The planting of the white mustard should be done in the spring period approximately in March.
After planting, constant irrigation must be carried out to keep the soil always moist. However, excessive administration of water and water stagnation should be avoided, so it is best to prefer soils with a good percentage of sandy fraction.
Irrigation may be reduced in number when the seeds have sprouted.
It is a good idea to carry out regular hoeing operations so as to avoid the uncontrolled growth of weeds and allow greater soil ventilation.
The seed is harvested at full maturity and before it falls to the ground.
As an industrial crop it is grown in succession to the weeds occupying the place of the common cereals. The production per hectare is about 15-20 quintals of seeds.
The tender foliage can also be used, which is harvested about 20-30 days after the plants are born and consumed fresh.

Uses and Traditions –
White mustard is cultivated for its seeds, as a forage and as a fertilizer for lawns, today it is widespread throughout the world, although it probably originates, as mentioned, from the Mediterranean basin.
The seeds contain many active ingredients including the sinalbine glycoside, which releases an alkaloid, the synapine, which is responsible for the spicy taste due to the action of enzymes: this species provides the best mustard. In the past it also had a pharmaceutical use: the “synapisms” were poultices based on mustard flour, used to soothe inflammation and constipation.
The conservation of white mustard seeds is carried out after their complete drying. Both normal glass cans with caps or cans with rubber gaskets can be used.
The oil is used in the soap industry and the cake is used mostly as fertilizer.
In southern Italy, mustard is cultivated as a herb in consociation with rye, barley, oats, favetta, clover, in autumn-winter sowing. The forage that is obtained must be administered to the cattle in moderation, mixed with others.
White mustard is preferred to black due to its less irritating parts and greater precocity.

Preparation Mode –
In the kitchen you can use whole seeds as pickles or toasted to flavor dishes. When they are ground and mixed with other ingredients, a paste or another more common form is produced.
The seeds, as mentioned, contain sinalbine, a thioglycoside responsible for their pungent taste. This species has a small amount of volatile oils and the taste is lighter than that of black mustard seeds. In Greece the leaves of the plant can be consumed during the winter, before they bloom; the Greeks call them “vrouves” or “lapsana”.