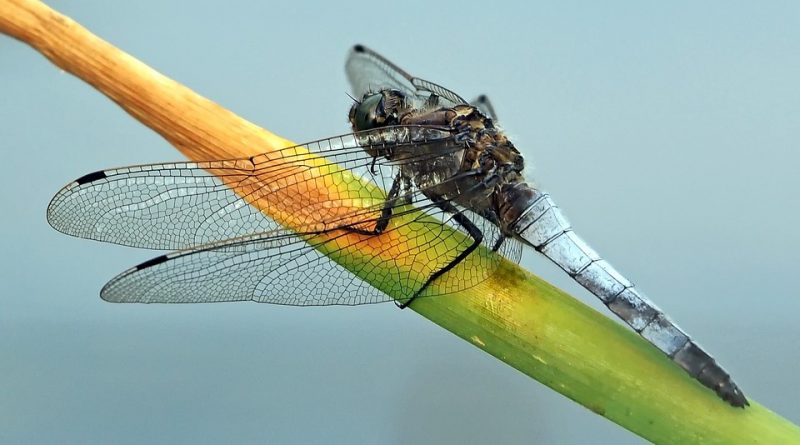 Geographical Distribution and Habitat –
The Libellula depressa is a fairly widespread species in Europe except for the northernmost regions corresponding to Scandinavia and Russia. In Italy this insect is widespread and common throughout the territory.
Its habitat is represented by open spaces or with vegetation near the water courses, and also small reservoirs of a corporate nature.

Morphology –
In the adult state this insect is recognized for its large size with the body exceeding 4 cm and a wingspan of 7–8 cm. The wings are well developed, with a rich vein, transparent and hyaline, with an extended, reddish-brown pigmentation, in the proximal area, of triangular shape in the hind wings. The hind wings are more developed than the front ones, for the posterior rectal region and the wider anal region, and at rest are kept open and horizontal.
The wings are not flat surfaces; in fact the veins are placed on different planes and for this reason they are so robust; moreover, the knot and the pterostigma make them stable and resistant.
The abdomen is long and wide, tapering back, light blue in the back, in the male, honey yellow in the female.
The head is mobile, with large compound eyes, almost joined at the vertex, three ocelli and short and thin antennae. The buccal apparatus is of the masticatory type.
The chest is robust, dark brown-reddish in the male, yellowish-brown in the female.
The pronotum is broad and crossed by a longitudinal median groove, but the tergites and pleurae of the second and third segment are particularly developed.
Its legs are well developed but not very functional, with the front ones being raptatorio, which it uses to catch prey in flight.
The costal margin is slightly wedged at the confluence of the subcosta and in the subapical zone the pterostigma is evident, in contrast with the hyaline transparency of the membrane.

Attitude and biological cycle –
The Libellula depressa, like the other dragonflies, is in close relationship, from the biological and ecological point of view with the aquatic environments; in fact in the vicinity of these habitats they spend their existence.
Nymphs live in water and are excellent predators, mainly hunting for insects (in particular larvae of Diptera nematoceri) and tadpoles. They are also able to survive the drought for a few weeks by hiding in the mud.
When the young are mature, with a development that can last up to 5 years, the metamorphosis takes place: the nymph climbs out of the water where, in a few days, she will develop an adult insect.
These insects are seen flying during the summer from May until July-August. The females lay their eggs in water and this deposition is of epiphytic type.

Ecological Role –
The Libellula depressa is one of the most common European dragonflies.
Adults have diurnal habits, are skilful flyers and prey on small insects in flight.
The larvae are aquatic, as mentioned, they are active predators of aquatic invertebrates, moreover the formidable power of flight of the adults and the extraordinary sight make the dragonflies are winged hunters without equal.
The size of the prey they catch is very variable, but always proportionate to the build and parts of the mouthparts.
The preys are captured according to two different hunting methods:
– to the ambush: the dragonfly rests on a support and, sighted the prey, it pounces against it, catches it with the legs and returns to its perch to consume it;
– in flight: the dragonfly attacks and devours its preys, which are normally small, in flight and without the need to rest.
Most of the prey weighs less than 1 mg, but they can catch prey that weigh up to 60% of their body weight.
The hunt is carried out on sight: thanks to the very large compound eyes and the extreme mobility of the neck the dragonflies can see in all directions and see a prey within a radius of about 20 meters.
Adult dragonflies are vulnerable especially during metamorphosis, when they are not yet able to fly and become prey for various species of birds. Other dangers are represented by ants and spiders. The former prey on dragonflies during metamorphosis, while spiders can capture adults when they are laid or mated.
Dragonflies are excellent flyers so that they can remain in flight for a time that can even reach a few hours, without ever settling and performing activities such as catching prey, courtship, mating and spawning.
The flight is of fundamental importance for the adults, since they move only with the help of the wings.
Dragonflies move their wings independently of each other and in this way they can make immediate changes of direction and speed.