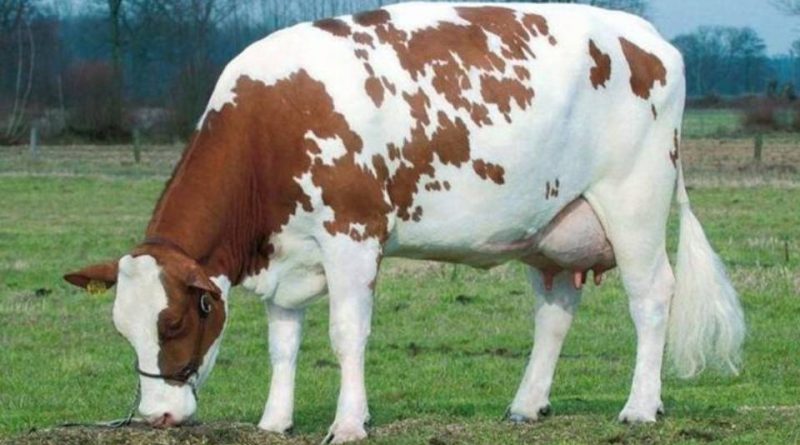 German Red pied of the Plain

The German Red pied of the Plain, also known as the European Pezzata of the European Plains is a bovine breed (Bos taurus Linnaeus, 1758) native to the North-West of Germany, is a dual aptitude for the production of meat and milk.

Geographical and area distribution –
The German Red pied of the Plain is a breed that originated in the North-West area of ​​Germany (where it is called Deutsches Rotbunte). Today it is bred especially in the areas of the central plains and the north-west of Germany.

Origins and History –
Originally the German Red pied of the Plain was bred mainly in the state of Schleswig-Holstein, in the Rhineland and in Westphalia. In these reproduction areas there is the origin of his reproduction history without there being any crossings until 1934.
Later the breed was originated through the cross between the Rotvieh breed, which is a red breed, and the Schleswig-Holstein breed, which is a black spotted breed.
Subsequently, starting in 1950, it was crossed with the Dutch Red Friesian Friesian breed.
In numerical terms the German Red pied of the Plain is the third breed, as leaders bred in Germany, like the Bruna and after the Frisona and the German Simmental. However today the breed is in decline.

Morphology –
This breed is recognized for having a coat with a red color, with a tendency to fomentino, spotted on white.
Limbs and ventral region are generally white, while the head is normally red with spots on the forehead. The muzzle is typically flesh colored.
The horns are short, waxy yellow, as are the hoofs.
These are medium-sized animals with adult females weighing 650-750 kg and have a height at the withers of 138-142 cm.

Production aptitude –
The German Red pied of the Plain is a dual-purpose breed but with a prevalence for milk production.
In general the average production at the head of the controlled cows is around 6,300 kg, with a fat content of 4,25% and of protein 3.45%.
As for the yield and the aptitude for meat production, this is discreet.