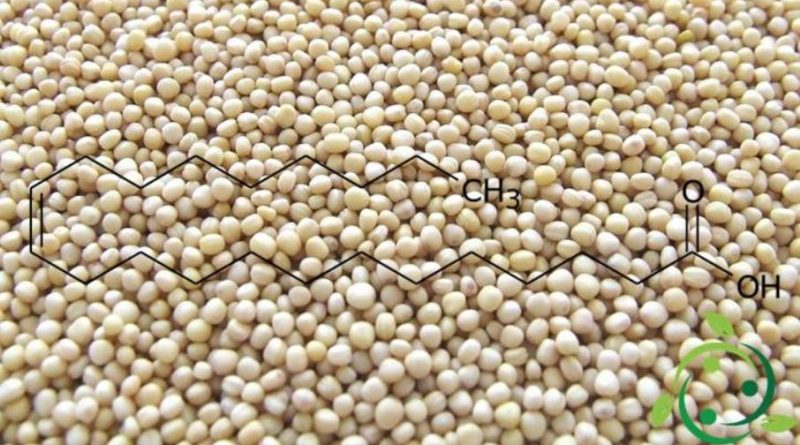 The erucic acid whose term in the official IUPAC nomenclature is: docos-13Z-enoic acid and whose brute or molecular formula is. C22H42O2, is a carboxylic acid of the class of monounsaturated aliphatic fatty acids.
Erucic acid is insoluble in water, it is soluble instead in methanol and ethanol.
The erucic acid is a typical component of the seeds of Brassicaceae to which belong, among other things, colza, from which an important oil is obtained in the food and industrial sector, and mustard, whose seeds are the typical ingredient of mustard.
Erucic acid, in the form of a glyceric ester, is contained up to 50% in oil from rapeseed and mustard seeds.
Erucic acid became known in the 1970s, when a series of studies conducted on young mammalian animals confirmed their toxicity at high dosages. In particular, erucic acid was shown to be cardiotoxic, with an increase in lipid deposits in the heart of experimental animals.
Since then we have worked on the selection of varieties, with a low content of erucic acid, of which one, renamed canola – particularly poor in saturated fats and erucic acid.
Canola oil is an oil derived from rapeseed selected to contain the rate of erucic acid below 2%.

At the same time, other varieties of rape destined for the chemical and mechanical industry have been selected to increase the erucic acid content of the oil, which is important – for example – for its high lubricating power and resistance to high temperatures.
Given its toxicity to humans, the use of erucic acid in the food sector at European level is regulated by EU Regulation 696/2014 which prohibits its presence in food. Its maximum limit is 50 g / kg in fatty oils and in foods with their addition and 10 g / kg in infant formulas and follow-on.
Other direct or indirect uses of erucic acid include:
– The methyl ester is used in gas chromatography as a standard reference substance in some applications;
– It is mainly used in the production of emollients and surfactants;
– From erucicato it is obtained the erucamide, used for the synthesis of plastic films. Furthermore it is used for the polymerization of Nylon-13,13, more stable than Nylon-12,12, of petroleum origin.
– It is an integral part of biodiesel oils.
Erucic acid is also used to prevent a form of adrenoleukodystrophy. After oleic acid is the main component of Lorenzo’s oil.
Lorenzo oil is a mixture of monounsaturated triglycerides, used, as mentioned, in the treatment of adrenoleukodystrophy to dilute the concentration, in blood and tissues, of saturated fatty acid C26: 0 (cerotic acid), highly damaging to the myelin sheath.