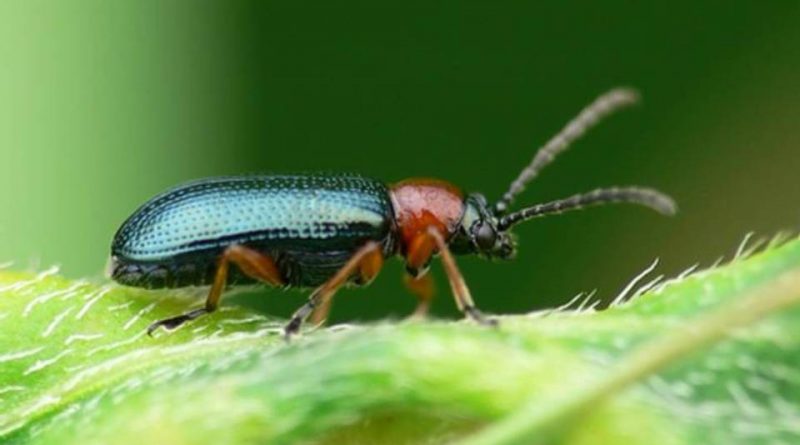 Geographical Distribution and Habitat –
Lema melanopa is a small beetle found in most of Europe, central-southern Siberia, the Caucasus and northern Africa. In Italy it is common in all areas.
He attends the following host plants: Wheat, Oats, Barley, Rye.

Morphology –
Adults of Lema melanopa measure about 5 mm in length and have a blue-green head and elytra with metallic reflections. The prothorax has a finely dotted yellow-ocher color.
The Antennae are black with gray hair and reddish legs with the distal end of the tibiae and the blackish legs.
The eggs are recognizable because they have dimensions of 0,9 x 0,4 mm, they are sub-cylindrical, rounded to the two poles, of yellowish color.
The larva is about 4-5 mm long, with a squat and gibbous shape on the back, yellowish in color with a darker head and prothorax, and is covered with blackish and mucilaginous brown droppings.

Attitude and biological cycle –
The Lema melanopa hibernates in the ground, or in other shelters, at the adult stage.
Once in the spring period, when the average daily temperature is around 10-15 ° C, they come out to go on the wheat or other cereals plants. In April, the mating and subsequent laying of the eggs take place. The period of oviposition continues until the end of May and the first decade of June.
On average, each female lays 100 to 400 eggs (with an average of 5-6 per day), making them stick together in a sparse way or in pairs along the inner spaces of the plants. After an incubation of about 15 days the first larvae come out in April; the larvae of the month of May have an incubation that can reach 7-8 days.
These carry out their trophic activity on the upper page of the leaves, moving progressively towards the higher ones. At the end of May – early June, when they reach maturity, after having performed three moults and having freed themselves from the covering of excrement, they go into the ground; here, at 4-5 cm of depth, they create cells covered internally with an agglutinating substance of mesenteric origin. At this point the larvae remain motionless for about two weeks to then complete the metamorphosis.
Adults emerge between mid-June and mid-July, after a week of pupal life; from this moment on until autumn they provide their own nutrition on cereal adventitious plants, wild grasses, forages and corn, and then take refuge in the ground where they will spend the winter.
Therefore, Lema melanopa makes a generation a year.

Ecological Role –
The Lema melanopa develops its biological cycle on Wheat, Oat, Barley and Rye plants. Damage occurs on the leaves and is caused by both adults and larvae; the latter are more harmful.
The larvae carry out their trophic action by gnawing the leaves and generally leaving the inferior page intact and determining characteristic longitudinal erosions, parallel to the ribs.
In the presence of strong infestations the leaves dry up but, in general, the damages are contained, also because the plants are attacked when they are already well developed.
Only in case of notable infestation we reach the complete desiccation of the most affected leaves, with consequent repercussions on the ripening of the ears.
Generally this phytophagous does not reach levels of infestation such as to justify specific interventions; moreover, Lema melanopa can be controlled by aficidal treatments performed with medium-wide spectrum products.