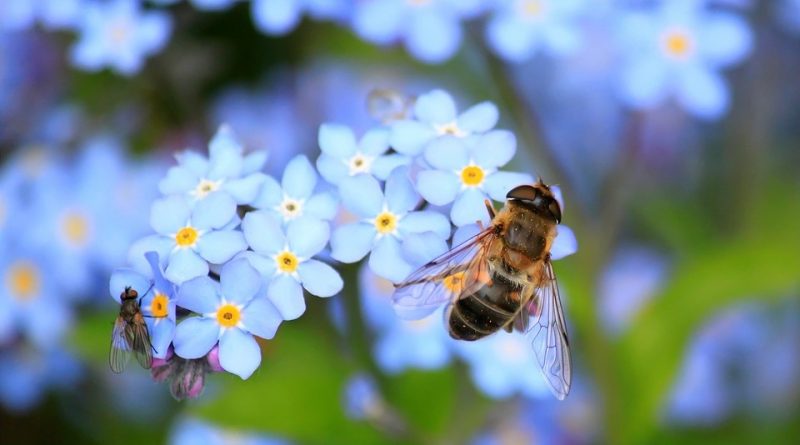 By the term “pronubi” we mean the insects that, in their biological activity, provide for the transport of pollen from one flower to another, thus allowing the process of pollination and therefore of fertilization.
The process of fertilization, performed by the pollinators, thus allows the transport from the anthers to the female ovaries which leads to the formation of the fruits.
The pollinating insects performing this function are many and systematically belonging to different families.
Among the insects that in any case play a predominant role in this role, bees and bumblebees are remembered.
The pollinating insects, in order to perform the function of pollen transport, have adapted morphologically to this task.
The most common adaptations are represented by the body thickly covered with bristles and a sucking or lambent-sucking mouthparts.
Thus the presence of the dense network of bristles allows pollen to remain entangled in them during the insect feeding phase during its nutritional visits of flower to flower.
The sucking or lambent-sucking buccal apparatus is a morphological adaptation of this apparatus to the diet of these insects, which is based on sugary liquids, represented in particular by the nectar of flowers.
To better fulfill this role, some insects have more pronounced morphological adaptations. In the Apoidea, for example, the tibiae of the hind legs are dilated and have an external concavity, called cestella, in which the collected pollen accumulates and is kept in a small globular formation by bristles arranged along the edge of the basket.
Another morphological adaptation of the Apoidea is represented by an organ, called a brush, which is a formation of sturdy bristles placed on the rear legs, which the insect uses to clean the body and collect the pollen.
The mechanism of action that allows the attraction between insect and flower is multifactorial and very diversified but, according to recent research, it would seem that the flowers are able to signal the availability of nectar inside them by modulating their electric field.
In fact, flowers have a weak negative electric charge, while, on the contrary, pollinating insects have a positive charge. He went through specific investigations and discovered that when an insect settles on them, consuming the nectar present, their electric field is modified. In this way, the insects could select the flowers that are worth resting on.
There are many pollinating or pollinating insects and in addition to the more famous Apis (including the Apis mellifera) and the Bombus, they generally belong to the following systematic categories:

– Hymenoptera: Api (Anthophila) in the superfamily Apoidea; the superfamilies Chalcidoidea (Agaonidae) and Vespoidea (Sphecidae, Vespidae and, occasionally, Formicidae);
– Lepidoptera: most of the species included in the order;
– Diptera: the Syrphidae, Bombyliidae and Calliphoridae families;
– Rincoti: the Anthocoridae and Miridae families
– Coleoptera: Tenebrionidae, Nitidulidae, Erotylidae, Chrysomelidae, Boganiidae, Curculionidae, …
– Tisanotteri;
– Orthoptera.
Some pollinating insects can play their role of pollination with regard to several plant species while in some cases very high specialization relationships may exist.
The specialization can be so univocal that the cultivation of a plate without the presence of its pollinator makes its cultivation useless and sterile. This is the case of some species of Ficus, where each species has a specific pollinator (of the Agaonidae family) and vice versa, each hymenoptera deposits its eggs only in the fruit of a distinct Ficus species, or as in the case of some orchids with the their insect pollinators (a classic example is that between Ophrys speculum and Dasyscolia ciliata).
In addition to specific cases and super specialization, the relationship between pollinating insects and plants is so important that the decline in pollinator populations is a major ecological problem in general but also an economic difficulty for fruit crops.
In fact, pollinating insects play an important role in fruit-growing and horticulture and the decrease in the density of pollinator populations can lead to drastic reductions in fruit or vegetable production.
In fact, the relationship between plant species and pollinator insects is often of a mutualistic type; thus insects get nourishment from the flowers of the plants they visit, which, in turn, ensure their generational continuity through their pollination.
This relationship is so important worldwide that this index is taken into consideration as a biological indicator in environmental monitoring.