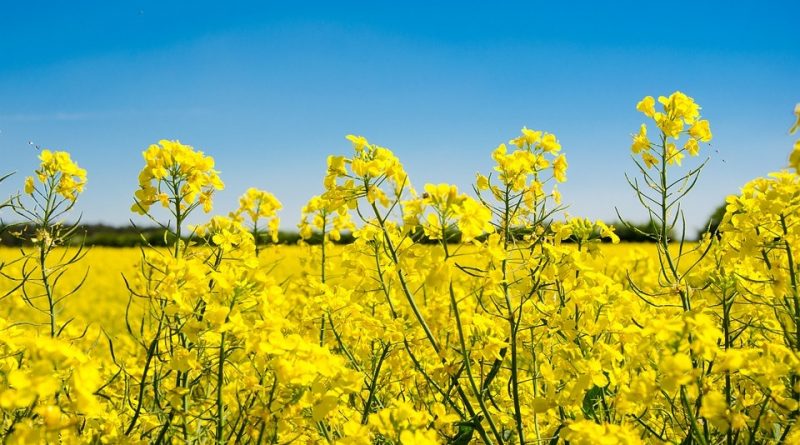 Rapeseed (Brassica napus L., 1753) is a herbaceous species belonging to the Brassicaceae family.

Systematics –
From the systematic point of view it belongs to the Eukaryota Domain, United Plantae, Magnoliophyta Division, Magnoliopsida Class, Capparales Order, Brassicaceae Family and therefore to the Brassica Genus and to the B. napus Species.

Etymology –
The term Brassica is the Latin name of the cabbage described by various authors, attested in literature starting from Plautus (III-II century BC). The origin of this name is uncertain and has been traced back to Greek or Celtic voices, without totally convincing evidence. Several etymological texts refer to the word Βράσκη braske, according to Hesychius used by the Italics in Magna Graecia to indicate cabbage. The specific epithet napus provienen with the Latin name of the navone, derived from the Greek νᾶπυ nápu mustard (in Theophrastus).

Geographical Distribution and Habitat –
The origins of Colza are uncertain but probably its center of diffusion corresponds to the temperate zone of Europe. Today it is an annual herbaceous species present above all in the state of cultivation but it is found in areas where it has escaped cultivation and has grown wild.
Today it is grown in the Asian continent, especially China and India, in Central Europe and in Canada. In Italy it is mainly cultivated in the north as a forage for grass in summer-autumn sowing and for the production of grain. 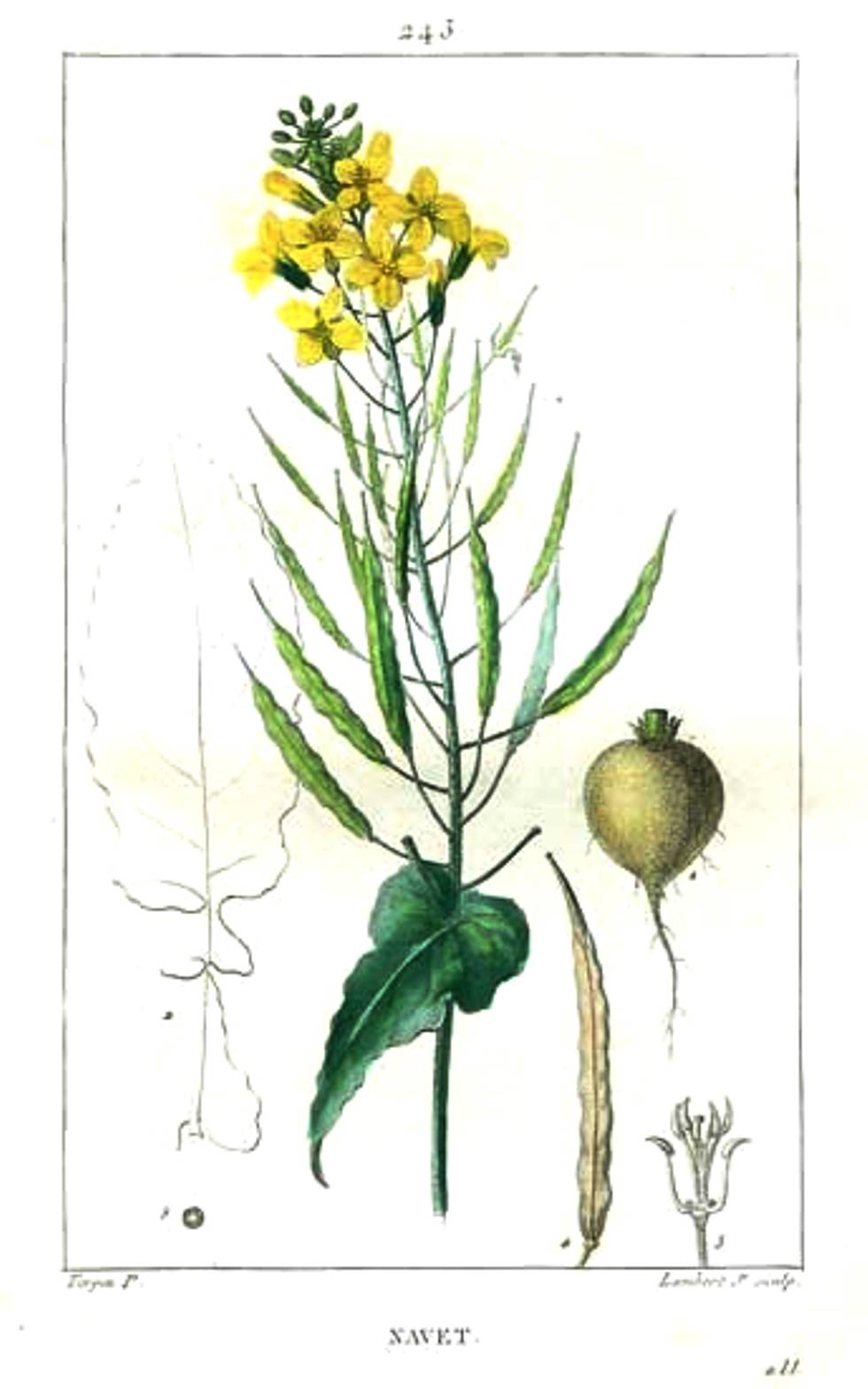 Description –
Brassica napus is an annual or biennial herbaceous species, characterized by a taproot root and an erect stem that develops from 0.5 m to 1.5 m, very branched.
It has leaves, glaucous and pruinose, simple, with the lower ones lyrate-pinnate and pedunculate and the upper sessile, oblong and partially amplessicauli.
The rapeseed has a determined growth with flowers gathered in groups to form a cluster that develops at the top of the stem; these have 4 sepals and 4 petals arranged in a cross and are yellow or white depending on the variety. The ovary is bi carpellar.
Flowering is scalar and through fertilization produce legumes (siliques) that contain small seeds with 30-35% of oil.
Each siliqua measures 60-100 x 2.5-4 mm, sessile, suber, attenuated in a conical beak of 10-16 mm. Spherical seeds 12-18 (29) per niche, dark brown measuring 1.2-1.8 mm.

Cultivation –
Rapeseed (or even rapeseed) is a plant with an autumn-spring cycle that improves the soil due to the abundant crop residues (roots, leaves and stems) which, once planted, allow a good supply of organic substance.
This species prefers fresh and deep soils and in soils with good water retention capacity it develops rapidly; it is a plant that still grows well even in areas with little rainfall due to its greater precocity than winter cereals. Regarding the soil characteristics of the soils, while adapting to a wide spectrum of reactions, it prefers a pH of around 6.5 while it does not present particular problems as regards salinity.
For sowing it is necessary to prepare the seed bed well and finely to prepare it for the reception of small seeds.
In this sense it is good that the surface of the soil is not too soft in order to prevent the small seed from being deposited too deeply as this would cause subsequent differences in the emergency; for this reason it is good to resort, after sowing to rolling.
If cultivated in colder climates the sowing should be done in the period of September; in southern climates it can also be sown until November.
To escape the cold it is important that the plant reaches the stage of 6-8 leaflets before the winter, as at this stage it has the greatest resistance.
It can be sown with a density of 70-80 plants per square meter, with a distance between rows of 25 to 35 cm.
Among the three main elements of fertilization, the N represents an important yield factor for rapeseed. Attention must then be paid to the control of weeds, a control that must be weighed with a balanced supply of nitrogen (which favors some secrets at its expense) and the technique of false seeding.
The chemical weeding will have to be increasingly discouraged because even if at the moment it represents an optimal solution for control, in the long run it is sterilizing entire agricultural areas with a decrease in soil fertility and structure.
The colza harvest is mechanized, with combine harvesters, and is carried out when the seeds have a completely browned color and with dry siliques (the optimal grain moisture must be around 12%).

Uses and Traditions –
The Brassica napus is cultivated above all for the production of the seeds that represent therefore the most important commercial part of the plant. The seed contains on average 45% oil, 25% protein, 5-7% fiber, 4-8% glucosinolates.
Of this species different varieties have been obtained that stand out for their commercial value.
There are winter types, with vernalization requirements for the ascent to seed and alternative types.
On the basis of the content of erucic acid and glucosinolates, four types are distinguished:
– A “double high”: high held of erucic acid and glucosinolates;
– B “0”: low content of erucic acid;
– C “00” or “double zero”: with almost no erucic acid content and no more than 5-10 micromoles of glucosinolates per gram of oil-free flour;
– D “000”: low content of erucic acid and glucosinolates and low fiber content.
Since 1990, EU legislation has prescribed the absence of erucic acid from the extracted oil and glucosinolates from zootechnical flour.
With the cultivation of rapeseed, in Italy it is possible to obtain productions of around 30 quintals per hectare with autumn sowing and 15-18 quintals with spring sowing. The oil content of the seeds can fluctuate considerably from one year to another, depending on the climate and the area but is around an average of 45%.
Rapeseed oil contains linoleic acid (4-10%) and is similar to soy. In the old varieties it contained up to 50% erucic acid, unstable and probably toxic. Today, as a result of the improvement and selection, varieties without erucic acid have become available: edible oil must have this characteristic, while for the non-food industry high erucic acid content is required. Alongside the production of rapeseed oil for food use, also the one for industrial purposes has a certain importance: in this case traditional varieties are used, since the erucic acid content is irrelevant.
From the processing of the by-product is obtained, among others, the cake that is used only in animal feed, mixed with other feeds for the toxic action of glucosinolates; “double zero” varieties are available, with zero erucic acid and low glucosinolate content. The high fiber content is another aspect that decreases the food value of the cake.
Rapeseed oil is used in nutrition after being refined and mixed with other oils since at the origin it has an unpleasant taste and smell. Rapeseed oil contains erucic acid, which is toxic to humans but used as a food additive in small doses. Because of the erucic acid content, as of other fats, rapeseed oil does not find a unanimous favor in human nutrition.
Some rapeseed varieties are sold as vegetables, especially in Asian stores.
Rapeseed is also a melliferous plant as it produces a lot of nectar from which the bees make a clear but pungent honey, highly valued in central and northern Europe. It must be extracted immediately after its manufacture, because it rapidly crystallizes in the comb making it impossible to extract. This honey in Italy is usually mixed with sweeter varieties when used as a table product or sold as a pastry product. Seed producers agree with beekeepers for pollination.
Another possible use of rapeseed oil is that of biodiesel production. According to some grower associations from rapeseed it is possible to obtain 850 kg of biodiesel per hectare.
In any case, at the moment the production is limited and consequently the prices are not competitive with those of diesel.

Preparation Mode –
In addition to the aforementioned uses, rapeseed oil can be used for human consumption. 100 grams of canola oil contain 9 grams of omega-3 fatty acids and 22 grams of omega-6.
Rapeseed oil with a low erucic acid content (the erucic acid content allowed in Italy must not exceed 5%), is used as a table oil, for cooking and in the manufacture of margarines and shortening.
Rapeseed oil is recommended in diets also, despite the controversy over the use of this oil, it is considered one of the best oils, since it has the lowest fat content compared to other types. Especially in diets it is generally recommended to replace saturated fats with monounsaturated fats since rapeseed oil is rich in monounsaturated fats.
Rapeseed oil can be used in the kitchen for any dish, even for those that require high-temperature cooking. In short, according to experts, it is considered the healthiest of all common cooking oils.
In addition, rapeseed is a vegetable of other times: in addition to being used for green manure and animal use, it can be found on the market due to our food needs.