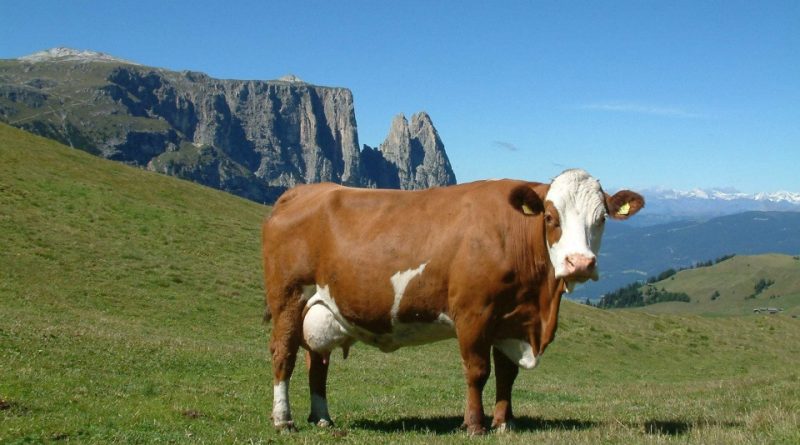 The Italian Red Pied is a bovine breed (Bos taurus Linnaeus, 1758) derived from the Simmental and originated in Friuli, it is a dual aptitude for the production of meat and milk.

Geographical and area distribution –
The Italian Red Pied, internationally known as “the Italian Simmental” belongs to the group of Spotted Red Breeds derived from the Simmental, a breed that from the Bernese Alps has spread to many European countries as well as to many countries in the world.
From the area of ​​origin, that is Friuli and Trentino-Veneto, this breed has spread throughout Italy where there are about 400,000 heads in which the 2/3 are present in the Triveneto; the rest of the garments are widespread in central and southern Italy.

Origins and History –
The breeding in Italy of the Italian Red Pied originated in Friuli through a crossing of substitution of the local bovine population with the Simmental.
In the early days this breed was bred for the triple work-meat-milk attitude; we are in the second half of the 800s when in Friuli and in the neighboring areas agricultural activity was the main employment. Who could not afford a horse, due to the extremely fragmented structure of the farms, used this breed for work in the fields, originally called “Pezzata Rossa Friulana” (from 1986, due to the DPR n ° 1134/86, it becomes “Pezzata Rossa Italian ”given the spread throughout Italy).
In fact it is a breed of mestizo origin originating from a substitution in 1870 between an old local breed called Friulana, used more for work than for the production of milk and meat, and the Simmental red spotted breed of Swiss origin. Later it was improved for milk using French Montbeliarde bulls and for meat through crosses with Bavarian and Austrian bulls.
In 1956 the National Association of Italian Red Breed Breeders was founded A.N.A.P.R.I ..

Morphology –
The Italian Red Pied is recognized for having a red spotted coat tending to fomentino.
It has limbs and ventral regions generally colored in white, with a white head (rarely red spots on the head) and red ears.
There is often a more or less complete white belt on the shoulders and loins.
The muzzle is fleshy red, the horns are short and waxy yellow like the hoofs.
In general they are harmonious animals, with medium-high size and stature, with bulls that can reach about 11 quintals and cows at about 7 quintals.
The height at the withers is 150 cm. for bulls and about 140 cm. for cows.

Production aptitude –
The Italian Red Pied is represented by rustic, early, docile animals with dual aptitude: milk and meat.
The production of milk is an attitude exploited above all in Northern Italy, where an average milk production of 50 quintals is reached for a lactation, with an average duration of about 301 days. The percentage of milk fat is on average 3.8%, that of proteins on average 3.3%, with a frequency of variant B of K-casein equal to 40%.
The production of meat is instead more exploited in the Center and in the South of Italy, where with an extensive breeding (grazing), milking is not always possible. The following types of slaughterhouse are obtained:
– End-of-career reproducers, with the particularity of obtaining a good and valuable meat from the female;
– Heavy calf with live weight at slaughter of about 5 quintals and average age of 14-15 months;
– Cow-calf line with grazing weaning of 1st or 2nd calf calf and slaughter of both, all this is done because mothers have good meat and calves at birth have high market value.
As for fertility, the average age at first birth is 30 months.
Furthermore, the total career of this breed is on average equal to 78 months with an average number of lactations equal to 3.7.