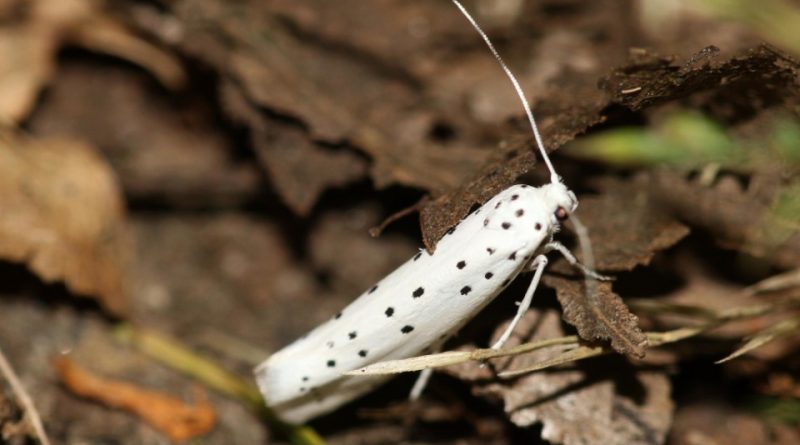 Geographical Distribution and Habitat –
Yponomeuta malinellus is an insect native to Europe and Asia and has spread to North America; in these countries the caterpillars develop mainly on the Melo, on the Plum, on the Hawthorn (Crataegus) but they can also attack the Almond.

Morphology –
The Hyponomeuta is recognized as the adult has a wingspan of 16 – 20 mm, with a generally pure white color. The front wings are speckled with black spots and the hind wings are greyish and fringed.
The eggs are laid in groups of 20 to 95, arranged in convex, oval or elongated ooplates and measure three 4 and 10 mm. These ooplaces are yellowish after deposition but become brown later; they are generally laid on the bark of 2-year-old branches and placed under the shoots or under the knots.
The larvae are straw-yellow in color at the first larval stage, the color of the caterpillar varies subsequently after each intermuta; it becomes slate blue gray after the suit, its pigmentation gradually clears until it becomes yellowish gray in the next suit. Each segment has 2 black spots, with a black head; at the end of its development, the caterpillar reaches 18 to 20 mm in length.
The chrysalises are enclosed in a small silky white cocoon and arranged parallel to each other in the center of a collective texture or “Nymph of a chrysalis”.

Attitude and biological cycle –
The annual cycle of Yponomeuta malinellus begins with the young caterpillars that leave the ooloplaces and resume their activity in mid-April (stages C3 to E2 del Melo). Flights are observed in orchards from July to the end of August.
The Apple Ermine develops mainly on the Melo, on the Plum, on the Hawthorn (Crataegus) but, as mentioned, it can also attack the Almond.
Adults perform a twilight activity, flying, mating and depositing after dark.
The eggs have an embryonic development that goes from 12 to 15 days.
The larvae, after hatching, enter into diapause and reside grouped inside ooloplaces in which they spend the winter.
In the following spring (April-May), the larvae leave the ooloplates and penetrate into the young leaves that undermine and whose flap takes on a swollen brown-reddish appearance. For transparency we distinguish those larvae that progress grouped together next to each other between the two epidermis of the leaf (miner phase). After flowering the larvae at the 2nd stage leave these places and weave silky nests incorporating the ends of the branches of which they devour the foliage (chain stage and grubbing of leaves that are grazed). Depending on the food needs, many nests are built later, and this up to the nymphosis where they spend the period together in a collective nest. Adults flicker in the summer (June-July). These mate and, towards the month of August, lay their eggs on the twigs; from these eggs the wintering larvae will evolve.
The nymph has a development of about two weeks.
Hyponomeut performs only one generation a year.
The larvae of the Yponomeuta malinellus cause more or less severe spoliations at the ends of the branches of the Meli, whose superficially gnawed leaves take on a red color. Even the young fruits, included in the weaving, have traces of bites. In the case of significant displacement, the summer growth of the fruits is stopped and they fall prematurely. The intensity of the damage varies a lot from one year to the next and occurs mainly in summer crops.

Ecological Role –
Yponomeuta malinellus is a moth that feeds at the expense of plants like Apple, other cultivated and spontaneous shrubby or arboreal Rosaceae (Hawthorn, Prunus, etc.).
In agroecology it is important to pay attention to the presence of its natural enemies; among these we remember the predators, such as the Antichoridae Rincoti, but above all parasitoids such as the Hymenoptera Icneumonidi, Calcididi and some Tachinid Diptera.
Generally the chemical fight against Iponomeuta is almost never carried out as this moth is kept under control by the treatments carried out for the other most important phytophagous pests of the Melo, such as Carpocapsa, miners, embroiderers and others.
Where necessary, specific interventions can be used, or in the case of plants for which there are no interventions that have a collateral action (as in the case of the apple tree), the treatments must be carried out:
– breakage of the buds, with activated white oils; these carry out an action on the wipes containing the wintering larvae;
– at the end of flowering, in the presence of the first grubs, with Bacillus thuringiensis ssp. kurstaki or with other insecticides with larvicidal action.