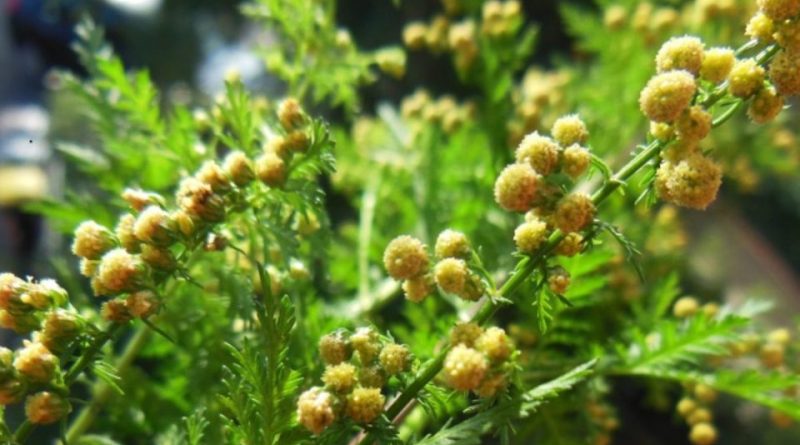 The annual mugwort (Artemisia annua L., 1753) is a herbaceous species belonging to the Asteraceae family.

Etymology –
The term Artemisia comes from Ἄρτεμις Artemis Artemis, Greek name of the goddess Diana: genus already mentioned in Pliny; according to some authors, Artemisia II of Caria (Αρτεμισία Artemisía? -350 BC), sister and wife of Mausolus, who gave her name to this plant. the specific annual epithet comes from annual, in reference to the duration of the vegetative cycle of this plant.

Geographical Distribution and Habitat –
The annual mugwort is a plant native to the province of Hunan in China.
In Italy it is present in a discontinuous way and is considered rare and probably naturalized. Even in the Alps the presence is not continuous. Outside Italy, still in the Alps, it is located in France (departments of Isère and Haute-Savoie), in Switzerland it is located in the Canton Ticino, while in Austria it is present in the Länder of Vorarlberg, North Tyrol and Carinthia. On other European reliefs it is located in the Jura Massif, the Balkan Mountains and the Carpathians. The typical habitat of this plant is represented by the ruderal zones, the gravelly and sandy uncultivated ones, along the paths, the railway scarps, dumps and edges of the roads (it is a sinantropa plant).
It grows preferably on calcareous or siliceous soils with neutral pH and soil with high average nutritional values.
It is present from the basal plane up to 500 m s.l.m .. 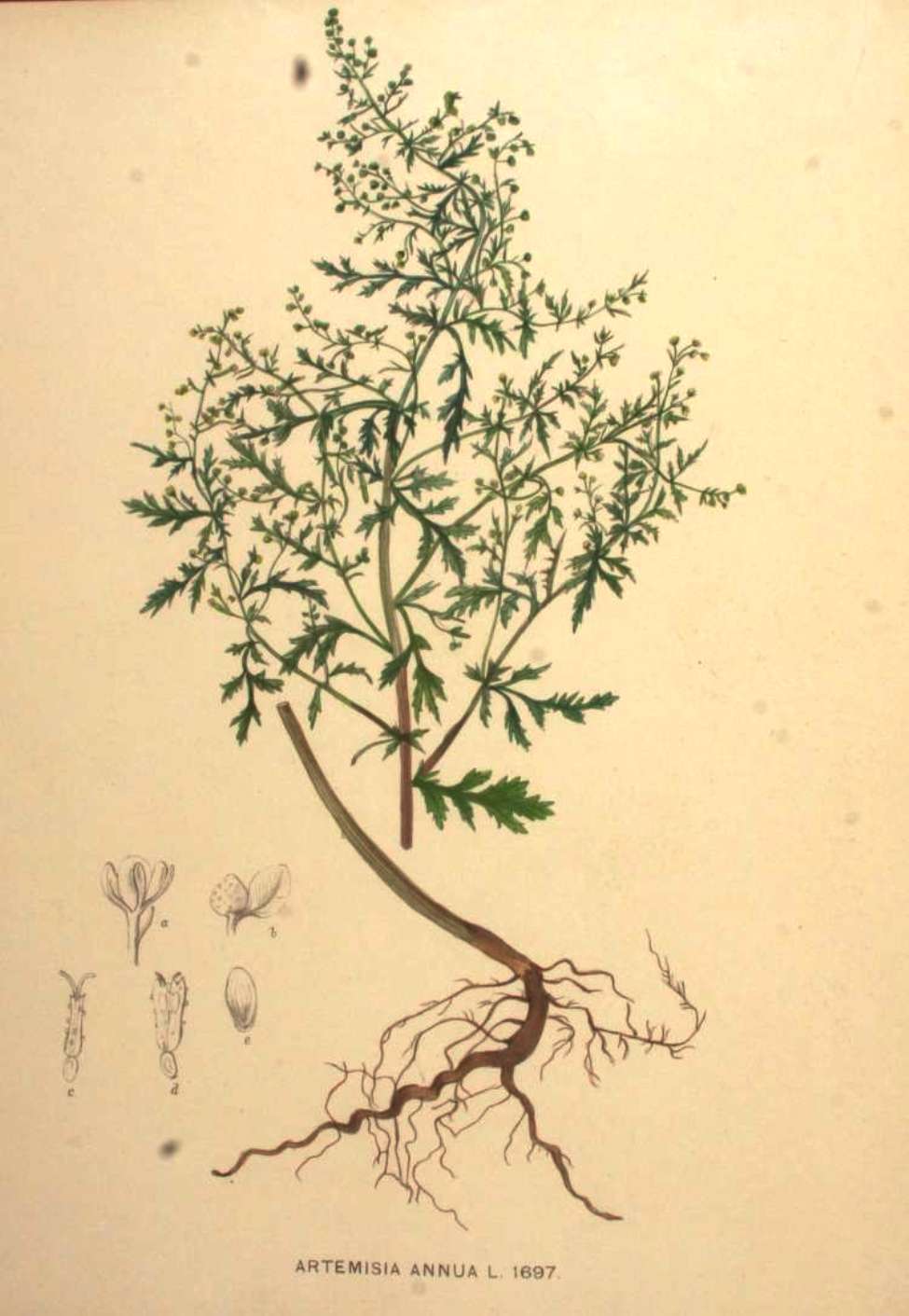 Description –
The Artemisia annua is an annual herbaceous species that in temperate climates can reach 2 m in height.
The plant can take on a monocaule bearing (with alternate branches), or bushy (branches at the base).
It has deeply settled leaves, which vary from 2.5 to 5 cm in length and contain filamentous cells (trichomes).
The inflorescence (capitula) has a diameter of about 2-3 mm, with generally yellowish coloration and enclosed by numerous bracts. At the center of this we find numerous bisexual (hermaphrodite) flowers, surrounded by female flowers (pistillates). Both types of flowers have a symmetrical tubular corolla with a penta-lobed margin in bisexual flowers and bi-trilobed in female ones.
The receptacle is glabrous and triangular in shape. As in the leaves also the floral organs contain numerous filamentous cells.
The fruit is a small achene with very small seeds (about 12,000 per gram).

Cultivation –
For the cultivation of the Artemisia annua it is necessary to choose frank lands exposed to the south, even if the plant adapts to the clayey soils; furthermore, it is not very demanding with regard to nutritional factors.
At our latitudes the growth cycle is spring-summer and flowering occurs in late summer. The plant is moderately resistant to low temperatures and dries completely with the first frosts.
Furthermore, photoperiodism must be taken into account for its cultivation. With the duration of the day of 12 hours the vegetative cycle is shortened and the flowering is induced, which explains why it is not possible to successfully cultivate this plant in equatorial and subequatorial countries while it thrives luxuriantly in our environments.
For the plant it is necessary to start from seeding in seedbed, due to the very small size of the seeds. When the seedlings reach the stage of 2-4 leaves and are about 10 cm high they are transplanted in the open field using the common transplanters.
The optimal plant density seems to be that of about 6 plants per square meter.
The artemisia takes advantage in particular of the phosphorus and potassium supply, even if in small quantities. Irrigation also has a positive effect on productivity.
To control weeds, it is advisable to proceed with one or two weeds.
Regarding the collection and use must take into account the content of artemisinin (sesquiterpene endoperoxide lactone) that this plant produces; the maximum content coincides with the beginning of flowering phase, which is optimal for harvesting, which is carried out by shredding the plants. These are then placed to dry in a covered and ventilated room. To date there are no machines suitable for mechanized harvesting. It would be important to be able to collect only the leaves or apical tops of the plant, leaving the woody part in the field.

Uses and Traditions –
The Artemisia annua is a plant known since ancient times for various and numerous healing properties. Among the earliest historical references to the use of Artemisia, as a source of curative phyto-extracts, we must mention Theophrastus (371-287 BC), which indicated A. abrotanum as anthelmintic and spasmolytic. There are well documented historical traces also in ancient Egypt of a use of A. absinthium as a vermifuge and curative of skin lesions. But it is in China that these species become particularly known and renowned for their varied health properties. In fact it was mentioned for the first time in 168 BC in the text on the traditional Chinese pharmacopoeia “Remedies for 52 diseases”, a text that was found in Changsa (prov. Hunan) in the tomb of Mawangdui Han and in which the Artemisia annua was indicated as an anti-haemorrhoidal remedy.
Later in AD 340, the same species is mentioned in a second text of the traditional left-pharmacopoeia compiled by GeHong: “Manual of prescriptions for emergency therapies”. This text illustrates the healing properties of the extracts and infusions of A. annua against malaria.
We need to get to 1596, when Li Shizhen mentions it as an antimalarial plant in her Compendium of Materia Medica volume. Even its use as a bio-fumigant against insects present in stored foodstuffs has been known in China for several centuries.
The turning point in the use and therefore in the diffusion of this species occurred in China at the beginning of the 70s, with the Mao government, which gave order to all sectors of the sciences sciences to thoroughly investigate the healing properties of various known plants from the Chinese tradition and among these also the numerous species of the genus Artemisia. Screening (which today amounts to over 130 investigated species) showed that A. annua actually had a potent antimalarial action and therefore came to the first official identification of an anti-Plasmodium action alternative to the antibiotics and quinine possessed by artemisinin.
However, the low artemisinin content (max 0.5%) in the genotypes of the Artemisia annua species cultivated in the recent past in Europe and America was the main limiting factor for the spread of the crop on large surfaces. In the last one, however, a genetic improvement was made which led to a marked increase in artemisinin in the aerial parts; with this improvement the genotypes now cultivated for experimental purposes reach an average content of 1.1 – 1.4% on the dry matter of the aerial part. This result, combined also with an abundant production of biomass (20-25 t / ha of dry product), could make the cultivation economically convenient.
Although to date the immunolocalization of artemisinin has not yet been well defined, there is strong evidence showing that this substance is secreted in glandular trichomes, since in the biotypes of A. annua that do not have glandular trichomes there is no production of the substance. In fact the artemisinin content in inflorescences (% S.S.) is 4 to 11 times higher than in the leaves.
To formalize the role played by artemisinin against malaria, the WHO (World Health Organization) has confirmed and reiterated numerous times the effectiveness of this active ingredient in combating this disease in its most aggressive and virulent form.
Given the insufficient global production of this active ingredient it might be interesting to promote the promotion of this plant using agricultural policy instruments such as the CAP.
To a greater stimulus in the cultivation of Artemisia annua it is recalled that this plant has also been used for decades in the treatment of numerous diseases, including dermatitis. Moreover, synthetic artemisinin derivatives are currently being researched for their potential use as anticancer drugs.
Furthermore, according to popular medicine, Artemisia annua has the following medicinal properties:
– antibacterial (blocks the generation of bacteria);
– antiseptic (property of preventing or slowing the development of microbes);
– carminative (favors the escape of intestinal gases);
– digestive;
– febrifuge (lowers body temperature).

Preparation Mode –
The Artemisia annua, like others of the same genus, can provide an essential oil derived from the leaves and used to flavor various alcoholic beverages.
Also for folk medicine there are many uses for this plant:
– infusions: 2 tablespoons of flowering tops in 1 liter of water for the treatment of fever, colds, stomach and liver disorders and to facilitate the healing of ulcers;
– dried leaves: placed inside the cushions, they cure sleep disorders, while in the sole of shoes they are an antidote to fatigue;
– branches: by hanging a few sprigs in the stables or near the gardens, it keeps pests and flies away.