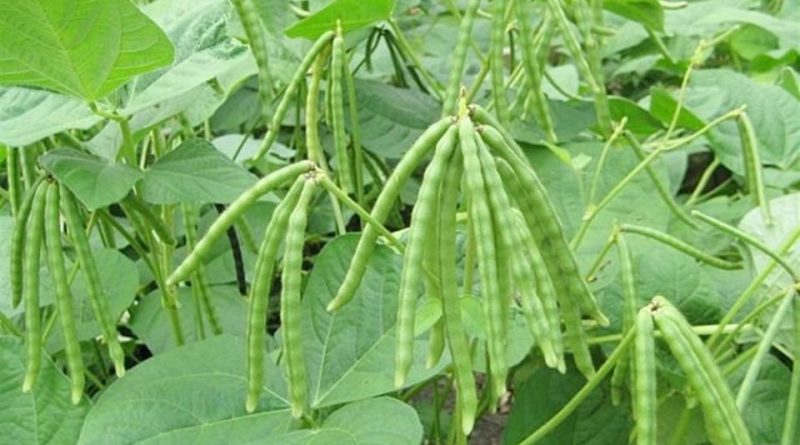 The cowpea, also known as the bean with the eye or the dolphin with the black eye (Vigna unguiculata (L.) Walp.) Is a herbaceous species of the Fabaceae family.

Etymology –
The term Vigna was attributed in honor of the botanist D. Vigna († 1647). The specific epithet unguiculata comes from unguículus, diminutive of unguis unghia: supplied with organs in the shape of small nails or claws.

Geographical Distribution and Habitat –
The cowpea is a plant native to Africa which was gradually replaced by the advent of the common bean after its arrival from the New World after 1492.
Compared to most other widely used crops, little is known about the history of domestication, dispersion and cultivation of the haricot bean.
Although the archaeological evidence for the cultivation of cowpea is lacking, the center of propagation of the cultivated cowpea is West Africa and, most probably, also the center of origin and the place where it was first domesticated, although, a recent research, which uses molecular markers, suggests that domestication could have occurred instead in East Africa; both theories currently have the same weight. 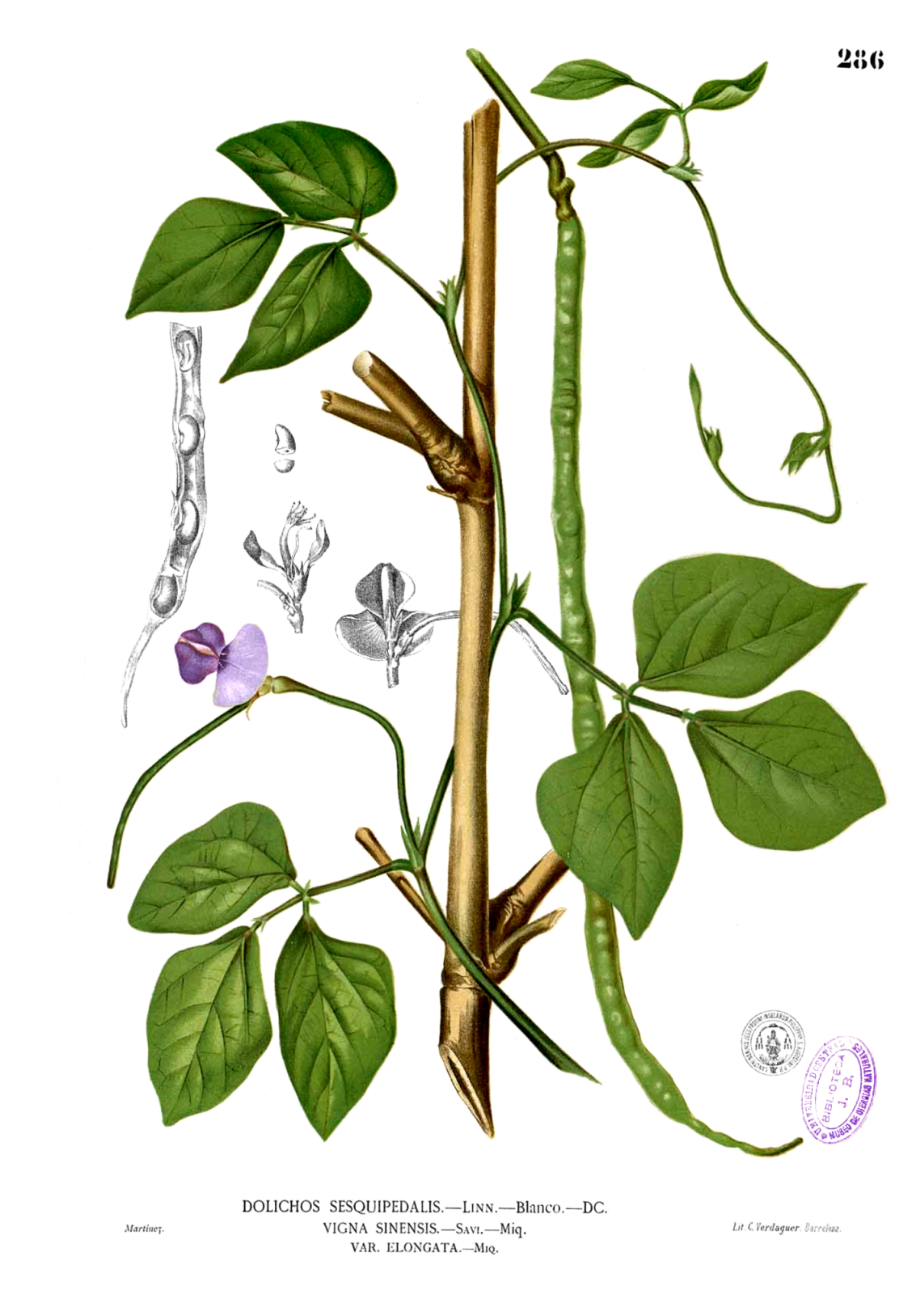 Description –
Vigna unguiculata is a herbaceous species that reaches a height between 60 and 70 cm. it has a taproot root system, with secondary roots that have the characteristic knottyness of legumes due to the presence of nitrogen-fixing bacteria (Rhizobium leguminosarum).
The flowers are white or violet and open early in the morning and close mid-day.
The leaves are trilobed and glossy green.
The fruit is a pendulous leg, thin, cylindrical, of 10-30 x 0.5 cm, with numerous seeds, oblong or reniform, of 5-12 mm, whitish, black or red, mottled with black or brown with a characteristic spot dark in color “eye” at the point of insertion on the pod.

Cultivation –
The cowpea is a plant that improves and, in rotation, goes very well after the wheat but it is not recommended to put it in rotation after other leguminous, or potato, spinach, cabbage melon and cucumber, for phytosanitary reasons. For a good succession it is advisable not to return the bean from the eye to the same plot before 4 years from any bean culture.
As far as the sowing period is concerned, it can be sown from mid-spring to early July, although in Northern Italy it is advisable to wait until the first ten days of May when there are no more problems with cold returns.
For the sowing distance you can go from 40 to 60 centimeters between the rows, while on the row the plants must be kept instead (we recommend post-emergence thinning) at a distance of 10 cm between one and the other.
Sowing in postarelle can also be carried out by placing 3-5 seeds in each, respecting a distance of 25-30 cm between one postarella and the other and 40-60 cm between one row and another.
The cowpea is a plant that has a greater resistance to drought than the string bean and does not need excessive amounts of water; the irrigation is however necessary above all during the flowering and the formation of the pods.
Another important agronomic technique is, especially in the initial stages, the containment of weeds that can be done with repeated processing.
The period of maturation is almost contemporary, so if you want a collection of fresh vegetables, eaten up, spread over time, you need to make scaled sowing.
The harvesting period is when the cowpea has a humidity of 18-20% in order to avoid excessive product losses due to the spontaneous opening of pods that are too dry (it should be noted that in these conditions of humidity the seed rapidly loses its own germination and therefore the seed must be kept in dry and ventilated places, not massing it, so as to dry up further). The drying of the seeds is then completed by spreading them for a few days in a ventilated place and protected from direct sunlight.

Uses and Traditions –
Although the Vigna unguiculata is a species of which it is uncertain the beginning of cultivation is however one of the oldest domestic crops.
Remains of this charred plant from rock shelters in central Ghana have been dated to the second millennium BC.
It is believed that around 2300 BC the cowpea has penetrated south-east Asia where secondary domestication events have occurred.
From this area it has spread progressively towards the Mediterranean, where these plants were used by the Greeks and Romans.
The first written references to the cowpea date back to 300 BC and probably this plant reached Central and North America during the slave trade between the 17th and the beginning of the 19th century.
During the Middle Ages this plant was one of the main sources of protein in the poor classes and the species is among those recommended by Charlemagne in the Capitulare de villis.
Today, with the spread of the common bean, the cultivation of cowpea has lost importance in many countries. In Italy, for example, it survives only in some areas of Puglia, Tuscany and Veneto.
The greatest production of the cowpea is in the African continent, in particular in Nigeria and Niger, which represent 66% of world production. A 1997 estimate suggests that these legumes are grown on 12.5 million hectares, with a world production of 3 million tons and consumed every day by 200 million people.
One of the main problems with production yields is related to insect infestation which sometimes causes losses exceeding 90% of the yield. Among the main pests we remember the Maruca vitrata and the Callosobruchus maculatus that interests this crop after the harvest.

Preparation Mode –
The cowpea can be grown for the consumption of edible green beans, but also the leaves, the green vegetables and the pods can be consumed.
Indeed fresh consumption can be considered an interesting source of nutrition with higher yields.
As with other legumes, these green beans are cooked to make them edible, usually by boiling. Cowpea can be prepared in stews, soups, purees and casseroles, although in many parts of the world the most common way to eat them is in curry. They can also be made into pasta or flour.
They can also be eaten raw or cooked, but also sautéed or fried.
A typical dish in Africa is the Koki or Moyin-Moyin, where the cowpea are crushed into a paste and then wrapped in banana leaves.
In Africa cowpea paste is also used as a supplement in breast milk when weaning newborn babies.
The slaves that were brought to America and the West Indies cooked green beans very similar to those they had in Africa, although many people in the southern United States initially considered the beans of the eye not suitable for human consumption.